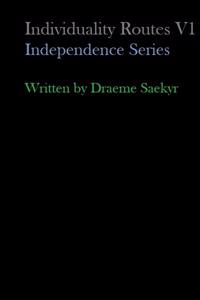 Tessa Rei is a sixteen year old orphan traveling with a merchant clan in the Dandre Kingdom. She has three companions, Ian, Laina, and Trey. All of them have secrets in their pasts and are linked to Tessa in ways she's unaware of right now.

Meridian (Ian) Cerne is a hybrid human elf and possesses abilities that he's mostly learned to control. He travels with the same merchant clan that found Tessa Rei. He's always hanging around Tessa even when she doesn't want him bugging her. He's seeking answers about his past, but realizes the only way he'll learn is through working with others and adapting his abilities to each new environment that he's found himself in without awareness of time passing.

Laina Damaris is human, she's seventeen, the oldest daughter of the merchant leader who found Tessa Rei. They grew up together, but not always as friends or even companions. She's a renowned seamstress who wants to broaden her horizons and escape from an unwanted marriage set to take place when she's eighteen to another clan merchant's son.

Trey Conrad. A master illusionist, no one knows his actual appearance or age for that matter. He hangs out with Tessa, Laina, and Ian because they accept him for what he is and don't ask questions about his past. While he's not exactly seeking questions about his background, he is interested in helping Laina, Ian, and Tessa find what they're looking for in their lives. If he can gain some amusement on the way, he'll be happy.

Filled with action, sniping, and occasional sarcasm, Tessa and her companions are determined to survive and learn the secrets of their pasts. Meanwhile, they'll meet new species, gain new skills, unlock latent talents both of elemental magic, and psychical in nature. They'll also find themselves on a seemingly uninhabited peninsula which is the gateway to a whole new life.

That is, if they survive what that world has in store for them.