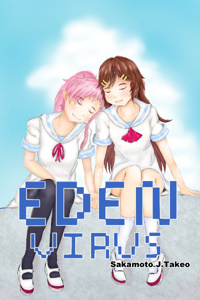 It spoke to me a light; “My child, are you not tired of this sin filled world?”

“Come and embrace me. Accept me.”

It called to me; A Paradise. It granted to me; An Eternity. It brought to me; Salvation.

For this world is Eden. And it shall burn.

Paradise. It's a pretty abstract concept. A land of luxury and fulfillment.

Too bad no one knew who the narrator was. Or who it's a paradise for. For the joy of a player can easily be hell for an NPC. Especially when you can't tell what's real or not

This is a lot of fun that's the least you need to know.

I won't go into too much detail with the story but there is a lot of inspiration from JRPGs and adds some seriously creepy horror. The plotline brings to mind 'The Matrix' and the atmosphere brings back memories of the 'Silent Hill'.

The characters are clearly taking some cues from JRPG/anime archetypes but those are templates and bases for who they are rather than their entire character. Nobody feels flat or lifeless. As an aside I think Alma's name is a reference to 'F.E.A.R.' and I did get an odd impression that makes me think there was some inspiration that game as well but I can't quite put my finger on why.

Style was a little choppy in the early chapters with a few bits feeling stilted and a couple scene transitions being confusing but that largely vanishes as the story continues and the atmosphere is consistently well done- especially when dealing with the horror elements.

Few grammar errors, only noticed a few, mostly when using a text to speech program. Nothing that the average reader will notice or care about.

So if you want something different, creepy in the way that get under your skin rather than makes you jump and nicely written as a whole this is what you want.

This story is not for me, but that does not stop it from being a well written piece which deserves recognition.

The horror tag is no joke. This world is fed up and everything is a little deranged. I can't read anymore of it because it makes me too uncomfortable. 'Its doing its genre a service.

Give it a read if you like feeling uncomfortable, confused, and a bit freaked out.

Keep up the good writing takeo