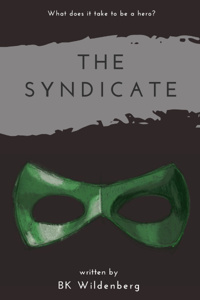 This is a thoughtful and fun superhero coming of age story although I will be honest that I wasn't ready for the low grade sexual assault that happens almost immediately (emphasis on 'low-grade.')

Even reading it, it feels like a brightly colored CW esque superpowered drama.  That feeling really works well with the way that the author writes the story.  At first I started reading expected super powered beat em ups right away, but I came away satisfied that it would instead be a story about the friendship (or more?) between the main character and his crush/mentor.  I'm sure super powers will factor in more later, but right now I don't feel like I need them to enjoy this story.

Style:
The story has a very light feel to it.  There are two POV characters, but the plot is still moving along nicely without major distractions.

Grammar:
A couple errors here and there but nothing super noticeable/serious

Story:
The story hasn't really progressed.  Instead the story is about both of the MCs finding themselves in different ways.  I would be disappointed if there were major progression in the characterization at this point given the relatively short length of the story.  This 4* should be considered more of an 'incomplete' or 'placeholder' while we wait for more to be written.

Character:
The characters are well written and likeable.  I know what their motivations and fears are, and they are understandable.

Guaranteed to Leave a Smile

I'm having a lot of fun so far following the CW-esque cast of characters and find myself actually cheering for them during their chapters. I'd recommend this if you're a fan of CW super hero shows, or other, non-cosmic super hero media. It's just fun and Maya's my ride or die.

The author has captured the fun spirit of a comic book world in an engrossing and enjoyable way that keeps me coming back for each newly posted chapter. The characters are vibrant and distinct and I already find myself caring about their self-discovery.

I am excited to see how it all goes.

I give it a double thumbs up

I give it a double thumbs up for the good superhero theme and the cute BL fluff.

I've got to say though, the name sounds way more sinister than I have found it to be. I thought the book would be more of syndicate corruption where Ronnie would find the true heart of the global superhero corperation. Instead it turned out to be more of a classical Cape story with a dash of fluffy romance between the son of two of the founders of the syndicate and a promising syndicate trainee.

Taran is the son of two of the strongest superheros in the world. With his elder brother dead it is up to him to hold up the family name and legacy. Seen as a constant dissapointment in his fathers eyes Taran tries hard to his best, not only for the legacy but for the safety of the citizens. When Taran meets Ronnie a kindhearted guy who makes all of Taran's worries go away, and mysterious cases of hero's going missing start to pop up, Taran's delicately crafted world starts to crumble around him.

Ronnie is a young adult who had to throw away his career when his mother died and his father got critically injured, not only physically but mentally. He takes up a job at a respectable diner, barely paying off his father medical fees along with the bills. He once once a kid who had aspired to be a superhero, to be strong enough to bear that responsibility. His childhood came and went and when no powers manifested he put down his dreams and went on to live a normal life. When he discovers his powers and is recruited to the syndicate, he has no idea how much his life is going to change.

That was my shot at a dramatic and slightly more detailed backstory of the two main charecters. I think the author did a wonderfull job, but it didn't really tell much. Anyways, imma just conclude this by saying it is worth the read.

An extremely cute superhero romance.  Don't let the slightly-creepy title fool you— this story is almost nothing but fluff and cuteness, with tiny amounts of angst sprinkled in to set you up for happy resolutions later on.  That said, it does have a plot in the background, slowly revving up but definitely interesting.  All in all, this was a genuine joy to read.