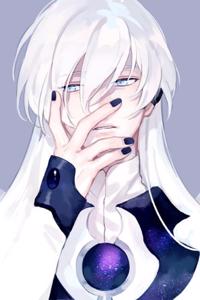 Ezekiel, an Angel in the multiverse.

Upon entering the infirmary, Ezekiel saw that Uraraka was already awake. A little smile opened on his face and he approached the stretcher she was lying on.

"Hello again, Uraraka." He said quietly as he lifted the cover from her wound so he could heal.

When he began to heal her leg, he touched himself that she had not answered him, Ezekiel looked at his face with a look of doubt and saw that she was averting her gaze, her face bulging and her big red shy cheeks. "Is everything all right?"

Hearing his question, her big brown eyes made contact with his big blue eyes for a fraction of a second before she looked away with a snitch again.

Ezekiel was intrigued by the attitude she was having, and without understanding, he bowed his head to the side and approached her face.

Uraraka began to feel him approaching her and the little girl's heart accelerated, now that she was already a teenager she already understood what love was and the distance a boy had to keep from a girl, as he saw him getting so close to her face, the cheeks that were already red began to get even more, this time even making a little smoke rising from her head of such shyness.

But contrary to what she expected, Ezekiel took the collar of her shirt and lowered it just a little to see and there was something wrong with her neck.

When she noticed that he was just checking on her health, Uraraka took a sigh of relief, but still felt a bit of frustration, seeing the look on his face that only thought of work. "You haven't kept your promise." She said quietly in a low tone.

Hearing what she said, Ezekiel remembered the promise he had made to her when she helped him fly and took a sigh too. "I'm sorry Uraraka, I really didn't keep my promise to you."

Hearing him admit it so clearly made her feel quite disappointed in him, after all, he had been one of her biggest motivations to become a hero. From the day they met, she started hearing news about an angel hero who was her age helping people in all kinds of emergencies, the countless online list of people who prayed for him, so that he would be okay and could help even more people.

She dreamed of becoming like that one day too, so that she could be by his side and help so many people with her Quirk, but seeing that he knew of the promise he had made and yet he did not keep it, made her heart hurt in disappointment.

Suddenly Uraraka took a fright, Ezekiel who was quietly treating her leg with that comforting energy, suddenly exerted a little strength on her and held her in his chest in princess style.

When she looked up at his face, she saw a calm, affectionate smile in her direction and suddenly a beautiful, huge pair of white wings appeared on his back several times more beautiful than when she had seen them when they were children.

"What are you going to..." Before she could finish the question, the huge pair of wings struck with surprising force, throwing them towards the skies.

Ezekiel, to make up for the promise he had not yet fulfilled, decided to take it to his favorite place in the school, at the highest part of the tower in an "H" shape.

As they flew, Uraraka marveled at the sensation of being so far from the ground with nothing to support her but Ezekiel, making her even forget the shyness of being held by him like a princess.

As he landed on top of the tower, Ezekiel gently stood her up on the ground and bowed her as he said in a sad tone, "I'm sorry Uraraka, for not keeping our promise before."

Feeling the tone of regret in his voice, Uraraka managed to understand that he had not done this on purpose, and decided to ask. "Did something happen so you couldn't go before? It's been five years..."

Hearing what she said, Ezekiel stared into her eyes and let out a light sigh. "Since I left that day, my master and I began a very demanding training session. During the weekdays I would study and help her in the UA as an assistant nurse, and during the night I would train my body with my father. During the weekends we made field trips helping people in hospitals and poorer cities".

Hearing what he said made her feel a little guilty, since it seemed like he was working hard to help people, and she wanted him to stop everything to go play with her.

"Today I am the secondary nurse of the AU, second only to my master, and to make it more practical, the AU was able to acquire a provisional license so that I could act as a support hero before actually starting to study here. So with my provisional license, I use my free time that I am not studying to be able to help more people, be it carrying wounded with my wings or even healing people in need in dangerous attacks, the only thing that I can't do under any circumstances is to take part in battles against villains since I am officially not a licensed hero yet". Ezekiel said quietly. "But I failed you since if it weren't for your help, I couldn't become the hero I am today, I made the mistake of abandoning one of my first and most important friends without giving any satisfaction..."

Uraraka was shocked by what he was saying, not because he was already a hero, but because of the maturity he was showing in admitting his mistakes to her. Usually, people their age are very immature and are ashamed to admit they made a mistake... -He seems to have matured a lot in that time working as a hero. -Yeah. - She thought proudly. "It's okay, Ez, I'm sorry to blame you too." She said as she approached him and gave him an apology hug, feeling a little ashamed that she hadn't had his maturity when she saw the situation as a whole.

"But I still have to make it up to you, how about we fly around town and have an ice cream? The results will take a little while to come out." Ezekiel opened a smile on his face and was excited to go out with his friend again.

"Sure! But you pay." Uraraka opened a smile back at him, happy to see that he had his usual attitude back.