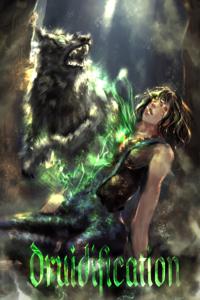 People have spent centuries perfecting the indoors. separating the comfort of the living room from the wild of the forest. However, when forces from beyond their comprehension start rising, bent on destroying all they know, the only thing that could stand up to them is the power of nature itself. Will humanity tear down its walls and let nature in, or will their pride and greed leave them isolated until it's too late?

Natalie is a wildlife conservation officer who just wants to spend time with animals, helping them grow, heal, and live happy lives. But when given the option between trying to maintain her old life and living a new one with wild predators, what will she choose as the world she knew falls around her?

Other-kin vibes, not for me. Nearly a good read though.

The story is engaging enough as is, though there are some issues with the tense shifting mid paragraph and occasionaly mid-sentence. The disgusting neighbor and bad co-worker are cartoonish and for the setting unbelievely so. I also got a strong sense that the better co-worker is a secret asshole, but i could be wrong.

Taste wise the wolves are overly expressive in an anthropromophised sort of way. I would go as far as to say its bad writting as giving a more alien sort of expression to the wolves would make them seem more majestic and better show the MCs connection to the wild.

I also get the sense that the writter doesnt have much if any knowledge of the outdoors, theoretical or practical. The MC as a conservation officer didn't know the proper name for a snare, and thought that for some reason the wet ashes of a doused fire would be blown away by a heavy wind.

Aside from the grammar issues the other flaws only make the story a little cringy and should little lasting impact.

This post-apoc story is almost good.  It is really cutesy, which isn't a bad thing on its own.  The MC (and anyone else that tries) can have animals jump into their spirit-space, and they can thereby become an infinite item generator by bringing in items, and bringing out copies.  Since MC was a park ranger, she bonds with wolves.  The animals become smarter and can talk.  So yep, cutesy.

While cutesy isn't bad per se, the plotting very much isn't taken that seriously.  For example, a bunch of tiny 3 foot goblins somehow cornered and trapped an entire pack of 7 foot high wargs.  And only the MC can rescue them!  And once she does, the ones that join her are super bad ass!

To this cuteness, we add bad humans that can get the goblins, hobs and perhaps other monsters to hop in their soul space, becoming anti-druids.  And these humans, and their monsters, are very, very rapey.  I don't exactly understand the mechanics of the 3 foot goblins raping human females, but apparently they really enjoy it.  Its a super odd mix of cutesy and rapey.

The most recent chapter made me quit and inspired this review.  The MC barges in to a lair of anti-druids and fights 11 of them without any real plan.  She wins without getting hurt!  The bad guys literally poop themselves they so scared!  Typos, typos and more typos for distraction.  And at the end of the chapter, she rescues her best friend who has been raped for days and days, and says "I guess we are even now" before passing out.

I dunno, the author has a nice sort of flow and with some improvement and additional attention to detail (proofreading and plot) could write something that would suck people in.  But this one has too many problems for me.  It probably doesn't deserve 2 1/2 stars, but I read a ton of chapters and can't deny that the cutesy works to some degree, at least at first, so it wouldn't exactly be fair to give it one star either.

I wish I could read this, I really do. The perspective and tense is all over the place, to the point it's unreadable as of chapter 2. The concept sounds great, and it looks like you're a committed writer with consistent releases. The lack of editing kills it for me. It's 1st person present, then 1st past, then 3rd past, 3rd present, and it's all jumbled together.

I couldn't get past the writing style and grammar. The plot and characters might get more interesting later, but in the little I read I wasn't hooked. Impersonal phrasing like "the door opened and a person walked through" is used heavily. I think that phrasing should be used only occasionally for emphasis or stylistic reasons (like starting every chapter with a paragraph like that) but it makes it harder to empathize with the now distant characters when used frequently.

As a story idea, this book could very well become amazing and popular. BUT! The execution was horrible. Not to be mean, but I bet the writter is an middle schooler, or really...really new to writing. I really doubt this book got 5 stars in story, style, character and got 4 and a half in grammer. The tense is all over for one and some sentences don't make sense. The characters are very one dimensional, the background for them is flimsy at best, and everything works out just fine (not supposed to happen). Let me note, yes there are conflicts but, things like walking up to wild wolves and nothing happening is too weird.

Finally the story, plot is very linear and too simple. She goes to woods, talks to wolves, and then gets powers. Where's the build up? Where's the confusion, the fear, the anger; the emotion!? And seriously, she has nothing in her life to do? It's like she was plopped down into this world with no life and everything is fine.

What I'm trying to say is that you need stuffing, you(she) can't just take everything as it is. You can see a dead green thing and be like 'from my knowledge: this is a goblin.'

Grammar is the largest sticking point

It should not be a slog to understand what the author is trying to convey. Like, the bones of the story are good, no obvious spelling or puncuation errors, but the grammar makes the story unreadable. I couldn't even get through the first chapter, I can't understand what is going on, the tenses switching around constantly.

This story would be vastly improved by a decent editor, and I'm sure that, through a writers group on discord or elsewhere, more than a few people would be willing to do so, but as of now...

It's really good. I love druids, loved the fact that it isn't a LitRPG or gamelit. The MC has good personality. I hope the author don't drop this novel.

Basically, it's what it promises, with a few cute puppies in the way.

I really can't understand why people don't like this story.

Or why it isn't more widely known.

There's barely any grammar mistakes that I notice and the author likes wolves, it's about nature and that already makes it one of the best novels to exist. But guess what? The MC is also pretty fleshed out! I think I know more about the MC than I know about myself...