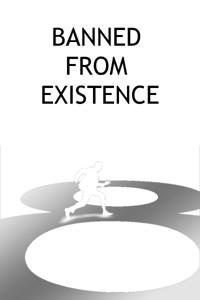 I touch the wall and let my hands slide past the stones, enjoying the texture under my fingertips. The hallway is badly lit, with some lamps working, others not. This is a welcome alternative after all the white room. I cross from a bright patch into a darker patch and I enjoy the change in brightness. When was the last time I experienced something like this?

I know what things are, what they are called, but how I learned those things I can't recall. How strange. I should be worried about this, but somehow I don't care anymore. This is my life now, indestructible, infinite stamina, and no need to sleep. I start to wonder if I'm still indestructible here in this hallway.
I make a fist and hit the wall. I feel skin scraping off my knuckles and pain flaring through my hand.

I cradle my hand and press it against my stomach as the pain grows worse. Why did I have to hit that wall so hard. What kind of fool was I! I might be indestructible but I'm not insensitive! Twice the fool! Memories of the crash against the invisible wall came back up and I felt sick, as if I had to throw up. My stomach heaved, but nothing came up. Battling to suppress the memories and the pain I closed my eyes and took deep breaths.

When I felt calm again I opened my eyes again and studied my hand carefully. The skin was unbroken and I could move everything normally. A memory of the pain still present, feeling as if it should hurt, but it didn't hurt anymore. I looked at the wall and saw the evidence of my "test" smeared and glistening. I could bleed, but I would heal just as quickly as I hurt myself. If the crash was any indication, nothing would kill me where I was now. Should I feel safe or worried about this?

I shook my head and walked down this seemingly everlasting hallway, moving from dark area to illuminated area, one foot after another. Sometimes there were mesh fences mounted against the walls, other times some air vents blew cold warm mist to the ground, giving the hallway an overall creepy feeling. I looked over my shoulder and saw the same behind me as in front of me, so I decided to keep on going forwards, albeit a bit cautiously.

"Ah, yes, here you are. Well, get on with it, walk forward, what you need is at the end of the tunnel. No need at all to walk back through that open door."

The posh English voice had returned and was urging me on to go forward. I turned around and actually saw a door behind me now, now the voice had pointed it out. I hesitated and stopped walking forward and turned to study the door.

"Oh no, what are you doing? You don't want to go through that door. You want to get out of here don't you? Just as I want you out of here. So, let's be reasonable and work together."

"Why should I trust a voice that I can't see?"

"Good question stranger! I am the Narrator, who can open doors and make things happen. I control this world and all that are in it, and I guide your story and hold the script."

Whilst mulling this over the Narrator spoke up again, this time sounding a bit aggravated and slightly mocking.

"And the stranger stood there, instead of listening to the voice of reason, studying the walls of a boring hallway, fascinated by the stones lining them. The stranger studied every join and every crack as if there was some special meaning to be found where none was, at all. Instead of following the voice of reason, what every normal Stranger would do mind you, which is of course, continue along the hallway to freedom."

A smile quirked my lips. I could appreciate the Narrators sense of humor. I decided to follow the Narrators instructions and to continue along the hallway, to see where it would lead. Turning my back on the door and setting my first steps away from it I heard a sigh of relief.

"As the stranger continued along the path of reason, a feeling of well being came, reaffirming that this what the right choice, the only correct choice that could have been made. The door behind was meaningless, and in front was freedom. With sure steps the stranger advanced to definitive freedom."

A mild worry grew in my mind due to the wording of the closing phrase. Definitive freedom? That sounded a lot like there was no freedom at all at the end of this hallway. Maybe the voice was playing games with me, leading me somewhere dangerously. But then I remembered my crash and my healed hand. Nothing could hurt me here permanently, I would recover I hoped, so I continued on walking forward.
After a short while the voice came back, sounding awfully cheerful.

"The stranger advanced and would notice a red light soon, with a hole in the ground. The stranger knew that the only way to freedom would be at the bottom of the hole, and without hesitation, the stranger would jump in, not becoming afraid and returning to the door"

And sure enough, as I took my next step a red light flickered on and a dark hole appeared in the ground. I could not see the bottom of the hole. Whilst I stood there studying the hole, trying to peer in the darkness the voice returned, with an urgent note to the voice.

"As not to be trapped again, the stranger jumped in the hole. The stranger knew it would be totally safe and lead to freedom. Freedom would be found at the bottom of the hole and not here at the top, where time was running out."