Hands Held in the Snow

Everyone paused, They stood where they were, frozen in place for ten, maybe fifteen seconds. Nothing but the sound of the wind and panting students.

And only after that did everyone cheer.

Mr. Statusian clapped. “You did it. You’re ready for the Winter Ceremonies.”

The two dozen students standing in a ritual circle bowed in unison, and then said, “Thank you for the day,” before ending the practice.

To Beatrice, this marked the end of a grueling final month to her schooling as a junior priest. She and her classmates worked hard together to perfect the magical rituals that would protect Balarand from harm for the rest of the year. One mistake and it could doom everything. But they wouldn’t make a mistake, not anymore.

Practice was over, but it was already nearly dark. Snow blanketed the ground and continued to fall from the sky. Most headed home, since there was nothing much else to do but get some rest before the big day.

Beatrice looked around at her white-and-orange-robed classmates, the ones with whom she would be performing in Knoll Park tomorrow morning. Just one month ago, she was the only one with a care in the world about religion class or the spells and incantations they studied. Now, on the precipice of actually casting a grand magical spell, it was clear everyone was ecstatic.

That even included Bodhi, who approached Beatrice along with Mr. Statusian. Bodhi had been beaming every time she saw him lately, and that was the same now. Bodhi had already taken off his robe and put on a cap, which made Beatrice suddenly realize she was still in full ceremonial attire. She lowered her hood and greeted the two of them.

Mr. Statusian pantomimed jabbing Bodhi in the ribs with his elbow. “Look at our star kid,” he said to Bodhi. “I’ve never taught a class as good as this one, and it’s all thanks to you.”

Beatrice tilted her head to the side. “No? I didn’t do anything special. It was your teaching that helped everyone.”

They both laughed, and Mr. Statusian said to Bodhi, “See, I told you she’d say that.” Bodhi laughed. He turned back to Beatrice. “That’s why you’re going to make Elince proud one day. I’ve had groups in past years who really made me stay awake the night of, wondering if they would really pull it off. But I’m going to rest like a greyback tonight.”

“Seriously,” Bodhi told her, “I’ve talked to half the people in our class, and they all say the way you work hard is the main thing that got them going. Thanks a lot.”

“It’s nothing,” is all Beatrice could say to spare herself the trouble of trying to mitigate all this unearned praise. She failed to suppress a nervous laugh. “Anyway, I’m looking forward to tomorrow. It’s very exciting.”

Mr. Statusian took another look at Bodhi and then waved. “Well, I’ll see you two then. I’m off. Make sure to leave the premises before the school closes.” He turned around and left.

That just left the two of them.

Bodhi looked like he was about to say something, but hesitated for a second. His left hand tightly clutched the ceremonial robes he was holding.

“Yeah, see you.” He flashed a toothy grin, the last thing Beatrice saw before she scampered off, disrobing while walking. She wondered if he was going to ask her to go eat or something like that, but she would have had to decline, anyway-- she had somewhere very important to be.

Beatrice traveled down the dim, snowy streets, the sun gone so early that she could have sworn she just ate lunch, and took in the all-encompassing wintery smell that permeated the entire city. It was the kind of scent of... well, ice, naturally, but also of smoky meat grilling by food venders, of the musty fur on the coats of nearly every person she passed.

But for everything, it was unmistakably, undeniably, that of Balarand. The city may have been under turmoil, may have been in a haze of tension as thick as the blistering, snowy winds, but it was still the only city she had ever called home. Beatrice was going to travel the world one day, going to make the world a better place. Or... at least, that’s what she had planned since childhood. But no matter where she went, she would never feel a home like Balarand, she was certain of that.

“That’s why you’re going to make Elince proud when you become a priest,” Mr. Statusian had said.

She had no idea what to make of a statement like that. One look at her girlfriend and her entire life went spiraling away. The Wills of the Gods wanting her to become a celibate warrior for peace, a paladin of harmony, all while Emi L’Hime was right there for her, someone she wanted to spend the rest of her life with. She was a gift from the Gods Themselves, surely. It was all so contradictory, so confusing that it made her want to figure out a spell to explode her own mind.

For now, though, she was going to put that off and focus on the present. Tomorrow, having fun and celebrating the Winter Ceremonies. Today, spending time with Emi.

In no time, she returned to the library, where her Dad was organizing some books-- and where Emi was sitting at a table, reading. Beatrice went directly over to the table, and pulled out a book of her own from her school bag.

Emi returned her greeting with a quick smile.

“EMI, WHAT HAPPENED TO YOUR HAIR?!” 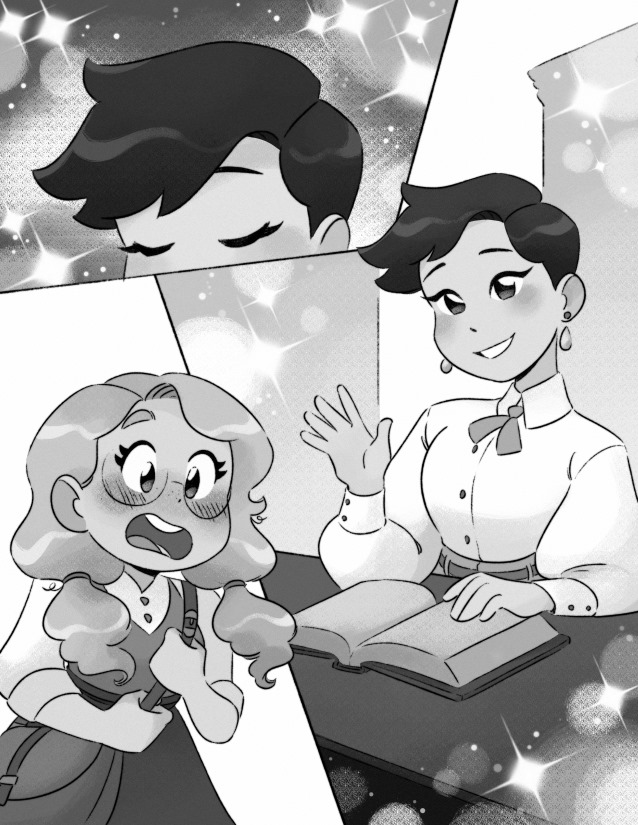 Where did it go? Did she drink an invisibility potion? Were those real?

Did Runa kidnap her and cut all her hair off for research?!

“I wanted to change my image up a little bit,” Emi said. “Looks pretty, doesn’t it?”

And then she did.

Unconscious or not, Beatrice was fine. In fact, she thought she just saw the human incarnation of the Goddess Phyra in front of her, at least until her vision blacked out. It was all good and fine... but maybe Emi could have warned her first?

I hope you enjoyed this shocking new plot twist.

Support "Hands Held in the Snow"