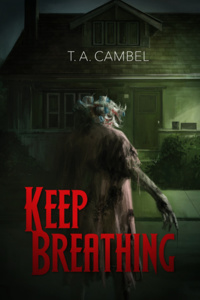 Keep Breathing follows lung cancer survivor Eury as she returns to her sleepy hometown, dreading coming home to her parents and the complicated past that still haunts her. Even with every amenity afforded to her by modern society, Eury has a hard time staying alive. But when the townspeople are driven insane and begin attacking one another at random, Eury is cut off from everything and everyone she holds dear, and left with a dwindling supply of oxygen.

Hardships and heartaches, bloodshed and violence, once she’s through it all, will Eury be able to Keep Breathing?

This story is best if you dont know anything before jumping in. Please do so before reading the reviews. It really thrives of a sense of mystery around the setting.

You have been warned.

If you're looking for some great post apocalyptic zombie horror you have come to the right place. The main character is a cancer survivor who has to bring a oxygen tank where ever she goes. Experience her physical and mental struggles when she has to adjust to a new way of living. One where she might fight for her life at any moment no matter how unfit she is. The only saving grace is that might not need to endure it alone.

The characters feel like actual people, who have lived there own lives before the start of the story. The grammar is asfar I know great, but I'm not a great judge for that.

My only complaint is that the style of writing can be confusing at times. Sometimes have to scroll back to reread sentence.

A horror novel worth diving into

This story has a lot in it that I can’t talk about without spoiling things, so this review will have to be brief. But rest assured, it’s enough of a recommendation that if you’re interested in horror with good characters and real stakes, you’ve got to check out Keep Breathing when you have a chance.

I can’t stress how much good characters can really make a story. Once you’re attached to characters who have real feelings and personalities and quirks about them, it really heightens all the thrills and stress of everything going around. Stock templates are good enough when you’re just trying to make aimless stuff, but here, this story shows that you can go so much further just by aiming a bit higher.

Keep Breathing follows Eury, a cancer survivor who is forced to use oxygen machines due to her health and has just come back to her hometown for the first time in years. She is a physically disabled heroine, already a major rarity in any kind of fiction, and in a horror-thriller piece, it’s a recipe for excellent tension all around. It helps that Eury has a rich and complicated backstory as well, coming off much differently as the story progresses. She is also joined by Kelly, a local whose past is just as depthy and equally as gripping.

So while the story for this horror-thriller is GENERALLY nothing beyond what we have seen before in the very large genre, the characters absolutely make the story. Not only are they compelling, but Eury's disability adds so much to the thriller elements here. She's faced with daunting odds and terrible events, but she also has to manage the fact that she's going to die without her oxygen machine. It ramps up the intensity of every single scene, and it's great!

I actually read the entire book, something I have never done for a review on Royal Road before (on account of most books finishing long after my review, if at all). And while my innate editor sense kicked in for some elements (I think the flashbacks were three too many, and also a complaint or two I can’t address here for spoilers), I can also see that this is a fully-fledged, complete novel as it is, and it’s a very good read because of that.

I look forward to the next installment in this series.

Come for the survival horror. Stay for the characters.

Everyday Normal Violence follows cancer survivor Eury as she returns to her sleepy home town only to find it in the process of succumbing to madness.

It's your classic zombie apocalypse scenario, it turns out - except that this time, our protagonist is someone who struggles to survive without assistance even with all the conveniences modern life has to offer, let alone through the end of the world. Hooked up permanently to life-saving medical equipment, Eury has mere days remaining before her oxygen runs out.

It's a premise we've seen before, but the execution here is stellar, on par with a published author - and a good one. The writing style is impeccable: easy to read, perfect pacing, and with a masterful handling of each character's insights and tone of voice.

And I want to take a moment to talk about the characters, because Everyday Normal Violence is all about its characters. Author T. A. Cambel knows how to write people. Even the minor characters feel human, three-dimensional and interesting. Individual personalities shine through without being caricatured or over the top, and Cambel expertly avoids the tired tropes of the genre. These are characters you genuinely care about and cheer for, who feel like real, unique people you could meet on the street, with whole lives and histories behind them. And you love them for it. They have real flaws, but relatable ones, and there was never a moment where I found myself raging at a character for making a poor decision.

I can't say too much more without delving into spoiler territory, but suffice it to say I'd give this story six stars for characters if I could. It delivers some of the best character studies I've read in any genre. Do yourself a favour and read it.

The sole criticism I have to provide regards the grammar. While very strong overall, I did pick up several errors, mostly regarding dialogue punctuation. Though I also noticed the occasional typo and incorrect tense. It's still far better than the average on Royal Road, so close to perfect, and just needs a minor cleanup.

Everyday Normal Violence is a story deserving of far more traction than it currently has, to the point I would say it's the most underrated fiction I've seen on this site to date. I strongly encourage you to treat yourself.

Reviewed at: Update and announcement!

This story is an absolut page turner! The premise is a really cool spin on the diseased zombie trope, and the descriptors were amazing! Kind of gave me left for dead vibes lol. SPOILER!!!!!

I Love the idea that Kelly's friends becoming the special zombies, definitely packed a punch.

Overall, the story was just great. Some grammer stuff needs to be addressed but nothing that completely takes you out of the story. Some dialogue moments were also slightly cringier than needed but that's OK lol. My last critique is that I would have LOVED to see more moments between Kelly and Eury to deepen their bond more as I felt that the relationship developed a little too quickly. Like eury says that Kelly was a leader in NA but I don't remember that conversation. I think adding more would just make the pay off at the end more satisfying. Other than that though I ABSOLUTELY LOVED IT

Well worth a read!

This story does what all great horror stories should do - It lets the tension build over time. It's the story of Eury, our protagonist, and her efforts to figure out what's going on, and to survive the events unfolding. It's a story that is well told.

The characters are relatable and have an enjoyable arc. There is real development to be seen in the characters through way of their interludes. I won't go into detail here as I don't want to spoil things, but I found that things pick up greatly around Chapter 5. Everything that happens up to that point is enjoyable but I found things were more building to that point.
The characters do feel real, which is one of the most important things in a story like this. There is no tension if there's no reason to care about the characters. One thing that the author does well is make you care about them and root for them to succeed. The dialogue can border a little on the edgy side, but that's a character trait more than an issue with the author's writing.
I personally don't care too much for first person POV, but I feel as though it was used to great effect here.
The grammar could use a small amount of work here and there, but that's more of a proof-reading thing than anything else. It's certainly better than most stories I've read on RR.
Report

The apocalyptic thriller I needed

Sometimes authors like to add a mix to the theme of their novels, but sometimes being simple and original is better. This author proves that statement.

An amazing story that keeps you on the edge of your toes. Masterful suspense reminiscent of Dead Space or Resident Evil. You'll be short of breath the whole way through.

What a ride. Started this one and right off the bat, the end of the first chapter had my heart going. Author has a good sense of drama and tension, so I loved that. The MC is super non traditional, not just a buff blonde dude but someone who is vulnerable and thus more intense to read about in scary situations. Check it out