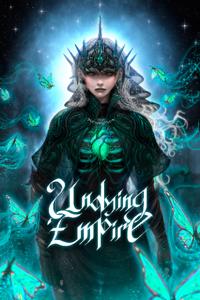 Elinor is just a sixteen-year-old goth going through some abnormal teenage drama; her parents are involved in giving some 'unwanted' humanitarian aid to Venezuela, and they're dragging their daughter along to expand her world view ... much to her displeasure.

The jungle sucks and the bus has no air conditioning, and great, she's kidnapped ... The Oscillation happens, monsters attack ... she's a monster. Now, she's in a foreign world, fighting to survive.

A little bit too much.

The story is nicely written, the characters have their own quirks and ideas, and the world around our Empress is rife with mysteries.

The system used is similar to litrpg but much more off screen making it mesh easier into the story than a table of numbers that pops up once in a while to disrupt your reading.

The main character has a niche set of skills that makes her good at one thing instead of some stories that make the main character a genius in every field they dabble in but that might change once the story progresses, if it ever will.

The only downside for me is the pacing of the story which is what made me give a lower score. The amount of detail that went into the first day can be quickly seen when one considers that it had taken fifty chapters of considerable length to finish it. If it was a story about a single event happening then that wouldn't be much of a problem but this is an empire fic and kingdom building is a thing here. If making of a stable empire can be done in a span of a week then it wouldn't be realistic. Hopefully the author can cut down a little with the details because if they don't, then it will most likely take more than a hundred years for it to get somewhere.

Started strong and then endless stalling

The first chapters were awesome, there was tension, action. Then it started to slow down, first, it was philosophical musings for a full chapter meaning nothing, then it was a full chapter explaining about control of populace. And after being disillusioned, you can notice that chapters are inflated by at least half using musing, stalling, or inflated descriptions.

There was an episode where to ask a question to subordinate undead, 30% of the chapter was spent on meaningless talk about why the question should be asked. And the answer to the question can be summed up as "Never thought of it"

It starts strong, with strong characters and a premise that is both distinct and well-executed.
The first chapters are tense, as we learn about the characters and the world around them there are constant challenges both emotional and physical.
Towards chapter ten the pacing slows down and then slows down some more. We get a treatise on Architecture, on Government then we get spider girls(like catgirls but a spider, don't ask).
Both tension and challenges are absent, without them character progression is limited.
It's especially jarring since the author can do better.
It seems like only the first chapters were planed plotwise.
If the author can recreate what he did in the first chapters this story may become one of the best on this site.
As it is Undying Empire is above anything else is a disappointment.

Reviewed at: B1 — 0. Humanitarian Aid Sucks!

While yes, I'm sure there's some things that Scott could work on in his writing, he always amazed me with his dedication to researching everything for his novels.

I've read up to his latest Patreon chapters, and the amount of philosophy and we'll thought out ideas impress me. These novels are not just whimsical power fantasies. They are flawed characters in unjust situations that make the best of what they've got. Well thought out in comparison to a lot of other web novels I've read. Rather than just write a chapter without much thought, Scott has been crafting a wide web of stories which obviously have a great plan to them.

I enjoy reading Scott's novels and look forward to seeing what comes next.

Thank you for the gracious gift of this novel. It is a shining light in a bysmal tunnel of this site. A proper undead empire novel. HA, cant wait for this book to gain chapters. Keep with it, you are doing great!

One of the more nuanced things around here.

This author's great strength is writing true-to-life dialogue, one he leans onto heavily. Characters will often air their thoughts in conversations that can be fairly long exchanges of point/counterpoint.

In a way, I can understand the average LitRPG reader of this site, who'll scoff every time “politics slow down the plot”, not enjoying this at all. That's how I rationalize the strange average rating and the somewhat misleading consensus in some of the highly voted on reviews, at least.

This is a fantastic Ruler-type story driven by dialogue. A story with an emphasis on social nuance and the protagonist's inner world and motivations. If I haven't managed to lay out in what way you'll be disappointed by this novel by now, you'll have a great time. Go have fun!

Grammar is good and the style is pretty proficient.
Characterization so far is pretty solid as well. The MC is progressively becoming more and more fleshed out.
The MC's actions make no sense tho. Maybe it's cause she is a teen but i found myself dreading what she will do next.

Can't properly review this with only 14 chapters.
Looking forward to reading a lot more chapters in the future.

Started reading on a whim, liking it a lot.

This story has a great opening act, and everything is done very well upto this point. But we're reaching the end of the opening act, and I've seen many stories falter at that point. We're not there yet, so 5 stars. Perhaps I'll come and lower it later though.

Excellent Characters and some Great Concepts

- I love the aesthetic of the story, the artistic flourish, and some of the ideas that are being played around with here

- Every character feels unique and different. The different species with separate mentalities are a lot of fun, and it's interesting seeing how they all coagulate under Elinor's powers.

All characters ahve their different priorities, interests, and ties to the world, which makes the universe feel living and breathable.

- The SPAG is EXCELLENT. It's clear time was put in in order to ensure the english was effective and comprehensible. There could be a few more em-dashes and semi colons to help mix up the grammatical style bit more.

- Book 1. Book 1's primary issues are... pacing. Not even pacing of the arc. The problem is that during the tense moments, where things are supposed to have weight and be on a timer, the narrative of that chapter doesn't feel like it's on a timer. There were a couple spots where it was "yeah, we have to hurry!" and then there were 2-4k words dedicated to discussing philosophy.

It's not that the philosophy is bad, but where it was sitting added dissonnance as a reader. It's like being told to hurry out the door by your mom and then you rush to the door and she's still in her room getting ready.

- Book 2 suffered from drawing out a particular conflict for too long. I began skimming chapters because the kind of underlying tension kept me from enjoying the characters and why I'm in the story in the first place.

Overall, I guess the primary issue I have is that SME is still finding his way into pacing. Suggestion: Word count in these kinds of lite-litRPGs are somewhat-analagous to time being spent. I need to be convinced, as a reader, to get my mind off of the mystery of a character being put to sleep for 40k+ words every 8 hours, before I can be convinced that something else matters more.

Some other points that are more nitpicky.

The General Conference chapter and some of the mormon lore had me cringing a little. Suggestion: Do more research into other religions to add to the mix, and don't be so blatant about them. I'm not saying religious references are bad, but given how well the world-building and character building and writing already is, that meta stuff throws me out of the worldbuilding.

Chapter naming - I suggest not naming chapters. The "Bored" chapter had me question if I was having fun reading the story at that point.

The biggest nitpick for the story and the style I have, is that you're introducing mechanics without foreshadowing them really. In particular, I'm talking about power being according to author fiat basically, and the rules of the world not feeling consistent. Everywhere the system is built and then there's exceptions being made to the system on a consistent basis. I understand the story's not a true litRPG, but the power variance has given me whiplash. So far there hasn't been a presented problem where I feel like the reader has enough information to solve it along with the characters, which is exacerbating the issue I have with the power levels and new mechanics of the story coming out of nowhere.

Couple that with the story only being a couple of weeks in total time, I had to dock points on the story and style for those issues.

Overall, it's a good read, I like empire builders and litRPGs, I'm glad you found a way to reduce the grinding present in many of the genre, but it seems there's some rough edges in terms of your plotting and pacing and style which need filing off. I can tell you're working hard, and want to encourage you to continue.