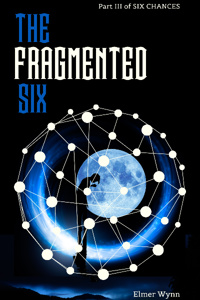 Convergence has occurred. Influenced by Jericho's rage and pushed by Maria's observations, Atienna has lashed out at her younger brother Bachiru who she believed was getting involved in dangerous, violent things he did not understand. Chastised for not moving forward, not making a choice, Atienna must decide. Everything has boiled over. The next step is to...

After her confrontation with Bachiru, Atienna headed to the Night Circle. Doused in paint, she’d leapt into the ring without thought and faced the opponent she’d fought only days earlier. The man with painted tears.

As soon as he stepped into the ring, he launched himself at her. She dodged to the right, but was caught off guard when he kicked his foot up to meet her face. She heard the crack before she felt it. A jarring blow that left the taste of iron in her mouth. She barely had time to recover before he swung his fist into her stomach. More iron.

He had gotten better. Much better.

His jabs were quicker, his dodges swifter.

Was she slow because of her hand injury? No, that wasn’t it.

Her swings would not reach him. Her itch could not be released.

He had gotten better, and she had stayed the same. This was really—

Abruptly, her opponent halted midway through throwing an uppercut. Pulling back, he regarded her. There was something in his eyes. Frustration. Like Bachiru. Without another word, he exited the ring of fire.

The onlookers remained silent. Not even sparing her a whisper.

Atienna felt shame burning her cheeks as the snake-masked ringmaster offered her a hand, but she accepted it anyways. She wasn’t sure if the streams running down her cheeks were from her tears or her sweat.

When she’d returned home, she painstakingly scrubbed the paint from her face and washed the blood from her hands before roaming out to her gardens. It was then that Olive had somehow managed to synchronize with all of them.

The desperate anguish Atienna had felt reverberate inside her chest as Olive told them about his sister left her breathless. To lose her siblings in such a way, she couldn’t fathom it.

Then came the subsequent synchronizations she had with the other five. Each of them heading somewhere. Running toward, running way, hiding—they were all in motion. Despite all of their differences, that was what the other five had in common. It was dizzying. All of them in constant motion. All except her.

Now, he tensed at her approach. But he did not move as she slid down next to him.

He sent her a glare, then froze with wide eyes. “Atienna—your face—what happen—”

Atienna clasped her hands together and smiled. “The wall and table have gotten their revenge for me breaking them—is that too unbelievable?”

She clenched and unclenched her hand for him to see before bowing her head. “I’m sorry, Bachiru,” Atienna murmured. “For scaring you.”

“You always scare me,” Bachiru replied. “This is the one time you didn’t.”

She gave him an inquiring look.

“You never get angry. You never cry. You never yell.” Bachiru shook his head. “You know that book you were looking for five months ago at the library? The book you could not find?”

“Mind of a Sociopath,” Atienna recalled.

“It’s true. I thought you were one,” Bachiru said. He glanced at her again. “But I can return the book now.”

Bachiru offered a wry smile before he frowned again. “I don’t understand why you do that. You’re upset, but you don’t act on it. You let things happen, and then you are upset when they happen.”

“But you think I’m wrong too?”

“I don’t think you’re wrong,” Atienna drew. “About trying to give aid to people who need it.” She tucked a dark lock of hair behind her ear in thought. “But what kind of aid? We can’t send our Conductors to them. That would just create more conflict. Would they accept any other kind of help though? Perhaps we could supply them with care items.”

“You could say that I’ve been a bit inspired,” she chuckled. By a pirate of all things. “But the way you’re going about it is wrong.” She allowed the smile to drop from her face. “Who was it, Bachiru?” she pressed. “It’s not like you to think of something like destroying the generator conductors and burning the Great Tree. You’re too kind for that.”

Bachiru looked away from her. “You will be angry.”

She already knew who it was.

In the darkness, the Great Tree glowed. Its white trunk seemed to hum with an energy that sent its glass-like leaves shivering on its branches. The pool of vitae at its feet.

“And the other tribe members?”

Usian turned away from the tree to face her. His face was eclipsed in the light. He didn’t look much like himself. “Well, that’s too bad.”

“What is more important, Atienna? Hope or peace?”

Atienna studied his back. “Neither is better than the other.”

“That’s where you’re wrong, Atienna.” Usian turned back to the reservoir. “The concept of peace changes with time and person. Sometimes it is defined as being without war. Sometimes it is considered a time where nothing changes. But a time where nothing changes can also be considered the opposite of peace by some.” He turned to her then. “We cannot be cattle sitting idly as this world changes. We cannot have peace that way. That’s why hope is much better, Atienna. It’s a constant.”

“You have always been a great lecturer, Usian,” Atienna said gently, “but I’m sorry. This lecture seems a bit too high-level for me—or perhaps it’s just that it’s too convoluted.” Before he could retort, she continued: “So please explain it to me. I’ve been wondering this, but I can’t quite reach an answer. Why would you go to such lengths in order to overturn the Council? I understand wanting to aid the Sagittarians, but…”

“I am only doing what your mother originally wanted, Atienna. For Virgo to come out of its isolation in order to contribute to a peaceful future for Signum. If she saw your reluctance now, she would be disappointed, my dear.”

Atienna stiffened. She wasn’t quite sure whether the tears that were pricking her eyes were ones of shame or outrage.

“I’ve been waiting this entire time for an opportunity like this. Hoping for it. A situation where they would have no choice. It was painstakingly long waiting for the right opportunity, but all my hoping and waiting paid off. Your poisoning, the Sagittarian request for support, your father’s stance amongst the chieftains, your brother’s hardiness. I had truly hoped that with all of this, your mother’s efforts would not have been in vain—”

A pause. And then, Usian sighed, “Knowledgeable ignorance and selective hypocrisy have always been your greatest faults, Atienna.”

Atienna recollected herself with a deep breath and smiled thinly. “That’s not the constructive criticism of a teacher, Usian.”

Usian turned to fully face her, allowing a wreath of white vitae from reservoir to shroud him. White.

The realization came a moment afterward as the word finally sunk in. Hope. The original Ophiuchian language. The meaning of that word. Elpis.

Jericho ghosted the edges of her mind.

No. That didn’t make any sense. The points didn’t connect—

“Well, despite my best efforts, it seems as if our plans here fell through. But there are always our assets in Capricorn. If not Capricorn, then we have someone ‘new’ in Aries. Yes, if what I’ve heard about what’s happening in Aries is true, then there’s still hope. Virgo will—”

Jericho’s anger boiled beneath the surface, but Atienna reined it in and released it with a quiet breath. “So, have you been teaching your students the ways of what I’m assuming you believe are revolutionaries?”

“I’m not a part of ELPIS.” Usian frowned. “They are fiends. I’m not lost enough in my own beliefs to agree with their views. But… they have assets, and they have a plan. I saw what they could do when I went to the Twin Cities. You should have seen what they were able to do with that peacekeeper. And they are right about many things, Atienna. Not that I care for those things. Our plans and sentiments happened to align. That is all. They are a means to an end.”

Usian looked as if he’d been slapped. Good.

“Can’t let me go on? What exactly will you do, Atienna? Will you turn me in? For what?” Usian scoffed after a beat. “All I did was whisper a couple of ideas into your brother’s ear. He is the one who chose to act. If anything, he will be seen as the one at fault seeing as he’s been recruiting members of other tribes for this plan.” He gestured to the empty area around them. “And nothing has come of it. There is no crime in sight and no evidence.”

Atienna looked away, clenching her fists. Something only for the night, she consoled herself. Not here.

“Do you wish for us to become like the Capricornians, who choose to punish their people for just speaking their minds? Or the Ophiuchians who achieve peace through fear and violence? There is nothing right about what I did—this is true—but there is nothing wrong with my beliefs either. You know this, which is why you have yet to do anything.” A dry chuckle. He walked toward and past her. “You aren’t your mother, Atienna. What can you even hope to do?”

Bio: Hobbyist writer, epidemiology graduate student, case investigator, retired weeb. I don’t have flashbacks; I have cringebacks. And the person who rings me up the most is Spam Likely ♡
-
(If you’re reading this, have a great day!)