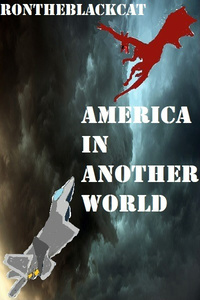 America in Another World

One day in 2019, the United States of America finds itself transported to a new world.

What will happen if a modern superpower from Earth finds itself in a world with magic and technology ranging from the medieval era to World War 1? F-22 Raptors vs wyverns and biplanes. Arleigh Burke-class destroyers vs wooden ships, mage ships, and dreadnaughts. M4 carbines vs bow n’ arrows, staffs, and bolt-action rifles. Featuring aggressive expansionist empires and magical kingdoms, what will the United States do?

P.S. I will do weekly updates every Sunday of chapters with about 1000-2000 words each.

P.P.P.S. Maomi (A friend of mine and no her actual name is not Maomi) is my editor and future cover artist. Say thanks to her for being involved with this!

P.P.P.P.S At this point, there’s too much ps, but one last thing. This is my first novel and I’m pretty sure I’m not a good writer, so this is like a “practice” novel with one of my less good story ideas (Don’t worry I take this seriously and plan to finish it).

Good for a bit

Reviewed at: Chapter 33 - Over There, Over There!

I like the premise and the start of the story. It got old pretty fast though.

I felt the story missed a lot of opportunities in describing new expansions, magic research, etc. The story focuses pretty much exclusively on war.

The story really dropped off and degraded in quality with the elves though. Way too much time spent on irrelevant things here. I just lost interest in the entire novel at this point. It would have been better if there was more magic use within the elven military. As it is written now it's basically just WW2 Germany. We know exactly how that would play out, so no suspense. We have already lost the novelty in the more extreme example of war vs WW1 countries.

As it stands right now, it's just one good idea that has to support a whole book. The story needs more creativity and some different directions to spice it up.

The idea is unique. The story itself is not bad. One can tell. the Author has put time and effort into researching various weapons and vehicles of diffrent eras. Its entertaining to read the clashes of diffrent eras. Unfortunately, the world building and the general plot seems rushed.

The existing Empires in the world just act like morons.(minor spoilers alert)/ We have a Empire who declares war on America without even bothering to gather any intel or any idea about the enemy capabilities. I struggle to see where this overconfidence come from ,when the Empire in question is already in an active stalemate war with another Empire.

Predictibily their navy gets curb stomped by America and their repsonse? Send in more navy. Both the emperor and his war councillor looks like they are on weed.

Magic is underused. So far its seems magic is just used more as a utility then actual magic. Which is a shame, cause it would have been interesting to see how modern weapons cope up with magic.

American President seems to think Lunch is more important then the whole new world situation he has find himself in.

Overall, the story is entertaining in an popcorn action Film sort of way. It just that the idea is weighted down by stupid actions and characters.

This story may be new but it's very promising so far. The premise is also quite unique (ik Ur basing it on summoning japan) but it's still unique. The chapters have decent length and grammar (something that is surprisingly rare).

Keep up the good work! 😀

Nice grammar. Easy to read.  Will reccomend. Keep up the good work.  Looks like it was based on the japan in another world story, but the only similar thing is the concept. (so far)

The concept was interesting, all of the USA was transported to another world where all the other humans are fighting with World War one doctrine and weapons or even older. But as expected the US steamrolls any opposition. If it wasn't for the colors of the text, the story would be impossible to follow as it jumps from one view to the next in quick succession.

The world has magic... but seems to be completely useless as it has very little impact on anything story-wise.

Then come in the elves, seemingly masters of magic, but all they bring to the table is World War II-era technology, specifically German tactics. Giving the Elves some interesting tech, or tactics could have made the story much more interesting. Instead, they are just hell-bent on killing all humans, using tanks, planes, and standard WWII-era ships.

As for the characters, none of them has any personality. They all just seem hell-bent on killing anything that they can with no thoughts of tactics, even the few American soldiers that appear in the story. The rest just flee hoping to escape the fighting.

The Grammar was decent but there is definitely room for improvement. Overall I had to give this story a low score. It could have been so much more. While I only read up to chapter 27, I didn't feel that continuing to read would change my mind in any significant fashion.

Trump would've made this a comedy

This story is a different take on the "Japan summoned into another world" genre, where it's the USA instead.

The author is clearly from the US, since he has a good grasp of what would actually happen in such a silly situation.

A notable style choice that the author made is to change the color of the text for different people/nationalities, I dunno if that's a better idea than using conventional writing.

The president of the US is probably the most notable character and I'm kinda sad that the author didn't use Trump, but I guess that would turn this into a comedy and I feel like it could blow up in the authors face. Just imagine instead of the president POW we just get a tweet a la "Redacted is trying to turn our great nation into a vassal. GREAT mistake. Sad." Then the POW could be given to a normal person instead.

I think the author is still in the worldbuilding stage for this world and he'll start introducing actual characters later, at least I hope so.

Read the whole thing and made an account just so I can give a review.  Overall, this story is an enjoyable and good read.  Some of the grammar and wording could use some minor improvements to make some sentences and scenes less awkward to read.  Definitely reccomend to other readers who are interested in this type of genre.  Would like to know more about civilian life in the US as things in the story progress, as well as in other countries of interest.  Definitely liked the portion of the story where life in the Machian Empire for it's citizens has changed due to the war, and would definitely wish to see much more of that in the future.

If you've read 1632 by Eric Flint and see some parrallels you're not too far off.

I loved the 1632 series. The idea of plopping a 21st Century Town into the wars of 1632 Europe and then having the tech and society of 21st impact and cause butterfly effects around the world was and is still a great read.

However...The idea of moving a WHOLE nation...now that's a different beast all together.

I'm gonna give the writer 5 stars because they're attempting to write something I've thought about, but didn't do because I was paralyzed by the humongous complexity of impacting a less advanced world by the introduction of a SUPREMELY complex country like the US of A.

So if you want to give this a read, and are intrigued by the similarity between it and 1632 of Eric Flint...you should. It will at least show you the coolness and yet not so cool ways of mixing a modern country and a supremely low tech society.

To the Undiscovered Country!!

Imperious Republic will be born!

I started to read this story about three month ago when it hit trending. Wasn't too impressed, the fact that WW I era and even Napoleonic war era people can't recognize that a modern society is more advanced than they seemed rather strange to me.
To them, a Ford T seemingly looks exactly the same as a modern car, skyscrapers are unremarkable and nuclear-powered carriers are no bigger than coal-powered battleships! (although to be honest, the bigger empires could be in the conversion-to-oil phase already)

But it was early days yet, so I gave it 3 stars and decided to wait and see and continue reading once a few more chapters ran up (and the war that was looming came to fruit).

Unfortunately nothing much changed, except that now we can add the feeling of watching a boxing match between an MMA pro and a toddler to the general awkwardness of the story.
Yes, the US armed forces are capable of beating a fleet of sailing ships and after that several fleets of "only" 100-year-old ships and their respective armies. Why the author found it necessary to spend a dozen chapters on this incredible unremarkable feat is entirely beyond me.
I'm still waiting on fighting magical creatures as the cover pic promised! Where's my dragon? Perhaps a summoned, magic throwing hero, a bunch of elves with arrows punching through tanks and dwarves tough enough to withstand an artillery salvo. Fantastical monsters and how to slay them? Above all, WHERE IS THE TENSION?

At least there are few typos and the flow of the tale improved as the writing goes on. Extra star for that. We also seem to have an actual character to follow, even if he's on the wrong side of the power-divide. Still, not my kind of story. (yet?)

Thinking about how modern day America would react to being isekai'ed gave me great joy. Im interested in seeing where the story will go next!