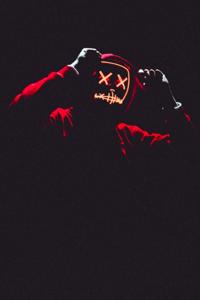 It was after World War Two ended; rumors spread of people wielding amazing powers or mutating into horrifying monsters.  Seventy years later, heroes and villains dominate the news and battle in the streets, discrimination drives mutants into the criminal lifestyle, and the governments of the world are struggling to handle the rapidly shifting paradigm.

Maxmillian Grants, like any sixteen year old boy, wants to be a hero and he has a secret: he has the power to do it!

Except, when he actually looks into the risks and the rewards he discovers that being a hero is not really worth it.  Being a villain, on the other hand, certainly pays well.  If you don't mind risking being sent to prison and being hunted by heroes and other villains.  Max, not being an idiot, does mind both of those things.  Instead of being a hero or being a villain, Max decides to take the third option, to be a vigilante!  His plan?  To hit the criminals in the gut and run off with their money, making the world a bit brighter at the same time by taking down the bad guys.

But how long can he actually manage alone?  Can he really navigate through the dangerous world of supers and capes without declaring for either heroes or villains?  Or will he be sucked into the web of plots and drama that is the life of those with superpowers?

So Far So Good

This story is going very well. The only character so far that has had any major depth is the main character, though that is likely due to there being only three chapters released at the point of this review. However, the main character has enough depth and complexity at this point for me to already be excited to see how he develops. The worldbuilding is done beautifully and doesn't at all feel like an info dump. Like the title says, it has been a great read so far and I definitely look forward to more. I'm not great at reviews, so don't take my word for it and give it a try for yourself!

Why can't this author actually finish anything? For real, lots of great ideas given form through good writing: none finished. Now, I don't read all of the author's notes so I don't know what's up, but hope that valderag will revisit these stories eventually. That'd be cool.

That's it. That's all I have to say. Why do these things have to be fifty words long?