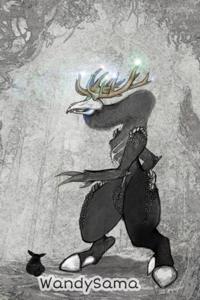 Remove Ads
A note from WandySama

This is a one-shot fanfiction. Please read

Caliban snuggled in the dimensional pocket. This was not a bad existence. Before this, it was all just an oblivion of darkness and perpetual hunger.

A flashback quickly was shaken away. Caliban hated remembering a time before Gwen. With Gwen, existence became tolerable, enjoyable even. True, caliban refused Gwen's attempt of subjugation at the beginning but thats because it was too scary. It was instinctive to preserve any form of freedom.

The manifistation of voice was something new too. At first, Caliban had had some random thoughts of hunger and fear but with Gwen's aid now those thoughts grew more complex. Caliban suspected for a while now that due to complex thoughts, feelings grew as well. The manifestation of voice though novel at the beginning, it felt primitive now. Caliban wanted to communicate with Gwen but the noises were too hard to utter.

Ariel was summoned the same day but Ariel was now able to communicate simple thoughts. Damn, that Ariel! The pretty sibling; The cute sibling; The magistic sibling; The worshiped sibling. Where does that leave Caliban? It was hard to ignore those disgusted looks that surrounded them when they took a walk in the city. Lovely Ariel was hidden with a spell to avoid fawning worshipers but caliban was on display to repel people. That really hurt caliban's adolescent feelings.

Only Gwen has given love unconditionally. That was the first feeling that budded in calibans heart. With that love came the drive to protect Gwen and get stronger.

(Consume) was the most pleasing due to its benefit... but... Gwen was a picky eater.

Caliban wanted to get more forms. Even if they wont be as majestic as the kirin form Ariel flaunts. Gwen subconscious is what solidifies the final forms Caliban gets to keep. The death worm was a comfortable shape to assume and replenish but spider form was more fun. The stag form...

That form was mortifying. Though Caliban was a proud sexless being of the void, the added member to the physiology was very troubling. This was one of many deep thoughts Caliban has been pondering as of late. Logically, the phalic forms were very useful to win over and humiliate Gwen's opponents and proove dominance. Why has it began to feel so degrading to have it exposed? Not only that, but Caliban felt very disassociated with the member. Not only was it not fun to flail it around; it felt wrong to have one to begin with. But the situation was tolerated because Gwen needed that form.

The form thought was combined with another recent peculiar deep thought. Caliban preferred the pronoun (she). The feminine term felt very right to her. She liked all feminine things. Caliban is aware that humans standards did not associate her looks to be feminine. In fact, she is percieved very masculine! Unlike perfect Ariel who could easily pass as female.

No matter how cute Cali acted, people just cringed. She had feelings , damn it, not just hunger. Though those crystals are tastey, they are annoyingly patronizing. She yearned to touch all those pretty dresses, to cuddle all those cute familiars and to bond and gossip.

"Shaa," Cali sighed happily to herself remembering her latest form. Those lovely hands on the big bird! Has Gwen finally understood what she wanted? Could she hope for prettier forms in the future? Her new familiar friend Ume was a void being too. She also felt that her master didn't understand her gender predicament. She wisely advised her not to over think it while they shared a delicious centaur. As void creatures, they were far from human understanding. But that was not as easily done as said. Ume did not have a wonderfully cute sibling like Ariel who challenged her body-love journey at every step.

"SHAA," Cali huddled in the farthest end of the dimension pocket.

Cali did not hate Ariel. Ariel was the sweetest familiar. She was just sad that she wasn't blessed with a cuter form. No one would think that Cali was a playful, loving and cute stuff enthusiast. Maybe next time when Gwen summons big bird form, she can try on some cute bracelets... or maybe rings? Hmmm.