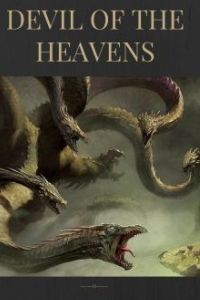 Devil of the Heavens


The three boys walked up to the battle platform. Their opponents were already on the platform discussing as they had a nervous expression on their face. Joran thought they were discussing battle strategies and began to laugh inwardly on how bad their opponents luck was drawing his team in the first match. Joran looked really overconfident. Taylor on the other hand was really nervous. This was his first official match in the academy. He thought of this match as a great battle which he would remember for his whole life. This match would be one of the highlights in his life. On the other hand, Zayer was rather clam. He didn't really care about this first match. He decided he won't even involve himself in the first match.

"Guys, I'm pretty sure you both are more than enough to handle them" Zayer said as they prepared them self for battle.

"You can't be serious right?" Taylor grew frantic as he heard what Zayer said.

"What Zayer said is absolutely correct but I think just me is enough though" Joran held his chest high.

"I guess this match is all yours Joran"

"You two! Can you be a bit more serious! I'm going to explode now!"

"Taylor, calm down. You're too nervous. I'm sure even you alone can beat all three of them. Just believe in yourself." said Zayer as he tried to calm Taylor down. Zayer knew both of them had good ability and weren't pushovers for their levels.

"O-Okay" replied Taylor as he still wasn't really satisfied with what Zayer told him.

Joran dashed forward without any delay as both Zayer and Taylor just stood behind watching him. The opponent team didn't expect such a quick attack and were at a quick disadvantage. Though Joran was a mage, he decided to go on the offensive like any other warrior would but this wasn't really a tactic any typical mage would use. Hence, Joran was a mage who thought of battling like a warrior. The other team didn't remain still either as Joran had already closed in on them. The team consisted of two warriors and one mage. The warriors moved forward to attack as Joran cast an earth magic spell.

Two raised walls appeared in right in front of their face. The warriors had no time time to react as they crashed onto the wall. Joran had used their own momentum against them. To everyone's surprise, the two boys were bleeding. On a closer look one could see that the wall had tiny spikes all over it. The Wall of Earth was a low rank spell that a beginner would first learn but the what Joran had used was the same spell with some modifications he had made on his own. Also Joran's mage force was stronger than his peers, hence the wall was much stronger.

The warriors were on the ground, trying their best to get up and fight. The mage couldn't believe what he just saw and was shivering all over. Joran realizing that the mage had let down his guard, began to attack once again.

"Too easy!" Joran smirked as he dashed towards the mage who seemed to be lost in his own world.

Joran held his hand forward and used a wind spell.

An air sphere appeared in his hand as he struck the mage on the chest.

The boy flew out of the stage as the impact was too strong. Two teachers rushed towards the boy and grabbed him before he could hit the ground.

The match was called off, Joran and team were declared winners. This caused a lot of commotion amongst the students as the fight was too fierce. Some of them grew cautious and some of them even started to fear. The match itself wasn't anything amazing, it was just that the execution and the timing of the spells were flawless. This could only be done if one were a genius.

As the matches continued Zayer and team had five more matches and won them all. Three of them were forfeits as the opponent teams were too scared to face them. Taylor finally got a chance to fight and he did well in defeating some of the students. Zayer thought Taylor really showed promise. Finally as the day ended, all that were left were four teams. Students began to gamble on the winner as curiosity rose among everyone. The team poised to win was the team of twin sword prodigies. The team consisted of one female mage and twin brothers who were warriors. The higher staff considered them to bring fame for Star Fire Academy. Some believed they were a talent which was to be found every hundred years and what was amazing was that there were two of them.

The day passed quickly as today would be the final day of the Freshman Competition. The four teams stood ready before the battle stage. Today the battle would be held in the Academy Arena. The Arena was almost filled with students. The Academy Seniors were present to watch who would be the strongest freshman. All the higher staff of the Academy were present, including the principal Bai Jan and the vice-principal Caesar.

To pick their opponents, the teams had to make their pick. There would be four slips of paper kept in a bowl. Those teams who got the same number would face each other.
The teams had made their pick and Zayer's team would fight the twin sword prodigies first. The other two two teams felt relieved as they thought the strongest two teams would fight each other first. If by chance some team member of the winning team were to be injured, they would have a better chance of winning.

The higher staff were seated on a raised platform which was constructed much higher than the battle stage. They could get a perfect bird's eye view from there. As the higher staff were chatting casually, the head of the warrior department studies seated next to Bai Jan began a conversation with him

"Principal, the first battle ought to be good. The twin sword prodigies were brought here by me. I have seen them since they were kids, I must say they are absolute geniuses"

"Carl, looks like you have much confidence. Now I'm really looking forward to their battle" as Bai Jan became pumped up Caesar interrupted him

"Principal, do you see the boy standing in the middle in the opponent team?"

"What? I had totally forgotten about him. Now this is a battle I must definitely watch. Let's see if the lad shows promise since he's that old hag's grandson"

"Principal, who is that student?"

"Oh, Carl he is from the Demonte Family. Let's see how he performs. What do you think?"

"Demonte Family has very little warriors. They are just too inclined to the Mage way. Today my two students shall show him the might of the Warrior way"

"Ho!Ho! Now that we are pumped up, let's begin this battle!"

Bai Jan waved at the referee to begin the battle. The two teams made their way up to the battle stage.

"Guys, I heard the twins are some sort of sword prodigies. I think we can't underestimate them like the others we have fought. I think all the three of us must fight" said Taylor as he glanced at the opponent team.

"I, Joran am ever ready for a battle. The stronger the opponents , the better it is for me"

"You two don't get your hopes up. This battle, I want to fight alone"

"Zayer! You want to finally fight?! That's good, let's see how much of ability you have" Joran smirked as Taylor grew more cautious.

"Zayer, are you sure about this? With the three of us, we have a better chance of victory"

"This so called warrior way everyone talks about, let me show you what it really is. Taylor, stand back and just watch me do it"

Zayer walked forward as the opponent team waited in silence. He saw the twin sword prodigies fuming as they thought they were being underestimated. The twin prodigies were considered the best in the freshman hence they felt the opponent team felt too little of them.


The Referee looked at both the teams, he asked them if they were ready to battle. Both the teams nodded in approval.

As the referee said begin Zayer took a few steps forward and looked at his opponents. The twin prodigies were in front together and the girl who was a mage stood at the back. This was a basic warrior to mage formation as they stood in a triangular form. The twin prodigies drew their swords and stood on guard. Seeing this Zayer too drew two blades, one in each hand. Two dark blades appeared out of nowhere which surprised the twin prodigies.

"You both can come at me together. I don't want to waste much time. Let's keep it simple"

Hearing what Zayer had said made the twin prodigies extremely angry and they looked as if they were going to blow up.

"Let's see how arrogant you are when I beat to the ground!"


Zayer smirked as he watched both of them closed in on him.

As the two of them dashed towards him, he noticed one of them was slowing down.

"I have seen too much of these useless tactics. Pity, I don't even know their name...That's it! Let's call the one in front as Apple and the other one as Orange "

The twin prodigies fumed in anger as they saw Zayer just standing still. They had never met an opponent that would insult them in such a way.

Zayer's eyes were fixed on Apple as his sword reach him any second.

Zayer blade clashed with his sword and made a really shrill sound but that wasn't the end. He instantly parried it and tripped Apple. Now he stood in front ready to take Orange head on. Orange was already in the air swinging towards Zayer but he didn't expect Zayer to be ready to face him. The expression on Orange's face was really complicated but he  decided to swing nevertheless.

"Impossible!" Carl stood up from his seat as there was a hint of shock on his face.

"Ho! Ho! Never expected there would such a good warrior in the Demonte Clan! What do you say now Carl?!" Bai Jan too was surprised to see the battle proceeding in such a manner.


Orange's sword was just above Zayer when he decided to swing the blade himself too.


"W-What in the name of the heavens just happened?" beads of cold sweat rolled down Carl's forehead as he was too shocked after witnessing what had happened.

I don't know what hiatus really is anymore.

next release? no idea......certainly not hiatus.