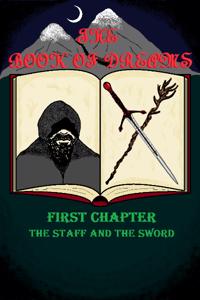 THE BOOK OF DREAMS, FIRST CHAPTER : THE STAFF AND THE SWORD

(I did the cover with ms paint)

In Clover, the land of eternal wars peace was scarce like falling stars. Flames of war plagued this land for as long as people could remember. The Fade, a terrifying plague thawed those flames but left a land piled with the bodies of its victims. Ehran’s wife and daughter Fell to its clutches, leaving him alone and devastated. Haunted by their memories, he left his homeland and came to a small town in the queendom of Robera. There he received news that the queen had issued a quest to find the Book of Dreams. A device that can answer all the questions. Rumour was that the book lay in the Dreaming mountains. A place Ehran knew well. The place where his home had been, the only peaceful place in the land of Clover. Determined to find a cure for the incurable disease in the pages of the book, Erhan started his journey to the capital city Valar to join this quest.

So, This is the first time I'm putting up anything definite anywhere, online or offline, for anyone to read. Since it's also my first NaNoWriMo project and I went in completely blank right on November first,(I mean literally. I didn't prepare at all. had no idea how the NaNo site even worked) I'm completely discovery writing it(pantsing's never really been my feviorite term). As I didn't have time to edit or anything, it's probably... well, I don't want to say 'crap', so you can judge for yourselves.

Also, it might be a bit on the purple side.

So go ahead and enjoy.

BTW. I hope to be a [participant in the Royal Road Writathon challenge] thingy...

Reviewed at: The journey and the pledge

The overall story seems very good. The earlier chapters have an issue with too little editing, and the resulting blocks of text are unappealing.

This issue is fixed later on, so unless the story isn't your type of genre you'll find it to be a good one.

The characters don't seem unreasonable, and nothing appears forced. Their attitudes are kept consistent, but if the way they think isn't something you like then you'll most likely grow to dislike the characters.

There are no issues regarding the grammer and spelling, at least no notable flaws.

Reviewed at: News of death and endless suffering

This is part of a series of reviews where I read the first 50 pages of the book and give a verdict on if I wish to continue reading.

The Book of Dreams: Staff and Sword happens to hit a very particular nostalgia niche for me. It reminds me of a campaign played several years ago about a bunch of peasants running around the length and breadth of the world in hopes of curing a plague that was ravaging their home. Although, not going to like, reading about a massive plague is a post COVID-19 world was a bit of a weird time for me.

In any event the opening is straightforward, but the hook is gripping and its immediately clear what the main characters goals and the stakes are. Though plenty of room is left for complications along the ways.

I alluded to it above but for the me, the plotting is this fictions killer feature. It's clean, immediately introduces stakes that show why the main character needs to set out and makes me care about the result of his quest.

I'm also going to highlight the world building, there is a lot of interesting bits moving around with the magic and I was frequently intrigued by the lore that was introduced and eager to discover more.

The synopsis didn't like when it said the story could use some editing, there are a smatter of typos and other grammatical errors. But, more to the point far too often I found myself stopping to puzzle at the construction of a sentence. Read aloud, the words awkwardly tumble into one another, and straight forward thoughts meander with ideas sometimes introduced in the wrong place. With that said, when the sentence construction wasn't driving me up a way, a lot of the language is quite beautiful. Which can make for a bit of a mixed bag.

My other gripe was the frequency of unimportant details being dropped into the story as exposition. With random asides just occasionally nestled between two perfectly good paragraphs, lurking, waiting to pounce and distrupt the flow.

Most of the time I could see no discernible reason for these paragraphs to exist, however if they are essential down the line better integration elsewhere in the story could only improve upon the experience.

Ultimately the narrative is compelling and hook-y everything you want in a good opening, which left me excited to read more, even if the technical aspects of the writing occasionally made me desire to be reading something else.

The good parts are amazing, but the rest is in desperate need of trimming.

Reviewed at: Curse and parting

Overall, this story is a dichotomy of great ideas and structures that I like, caught up in a mess of flaws that drag it down from excellent to frustratingly mediocre at best. I'm pretty sure you'll get more enjoyment if after chapter 1, you skip straight to chapter 6.

While the main character does manage to be sympathetic, his goals meaningful, and his angst relatable rather than annoying... he also just allows the plot to drag him along, like a leaf in a stream. As he's clearly depressed, it doesn't feel forced, but it grows frustrating.

In addition, some people get hit by the proverbial 'idiot ball' so hard it leaves concussions, leading to a great deal of unnecessary and childish character conflict which serves only to delay the plot and makes me wonder what the author was going for.

If he wanted them to be looked at with contempt, then that certainly succeeded- but the rest of the story leads me to believe he wants them to be considered part of the liked cast, and in that it fails utterly.

At its best, this story could have an easy 4, probable 4.5 for its characterization, but the lack of consistency and clarity of their portrayal drags it down to a 2.5.

The main purpose and goal of the story is intreaguing, with a MacGuffin of an item with one specific ability: to answer correctly any question put to it. As magic goes, it is easy to underestimate how powerful such a thing could be. It also has an interesting personal meaning for the main character, who is interesting and sympathetic, if completely reactive throughout most of the story.

So the main character(s), recognizing this, go off on a quest where only the most dire of circumstances could distract them. Right? Well... no. As a matter of fact, they do the exact opposite and slow themselves down for what amounts to a safari where they murder the local wildlife.

Which brings us to pacing.

Bogged down by the navel gazing and purple prose at times, but more egregiously interrupting the plot in order to give multiple paragraphs of backstory information when there's absolutely no reason for the reader to know or care about that information at that time.

Then there's the part where all the early conflict is just the characters being stupid, with nothing trying to stop them except their own stupidity. Perhaps if the conflict had been orsome shadowy group hoping to delay them and get the shiny first, it would have been more interesting. But, no, the characters and story enjoy an entirely skippable filler arc in chapters 3-5.

Then six comes along, makes you care about the MC again, and adds intriguing story elements that kept me reading the rest of the way. And then there's the nature of magic in the setting. I won't spoil it for you, but it's great and ties in perfectly with the rest of the tone the story sets.

The environment and experiences are described well, taking the reader into the story and making the setting feel alive. Making it some of the strongest parts of the story.

But it's also amongst the greatest weakness of the story- a slow and meandering start is not served well by spending thousands of words describing something that doesn't matter in any discernable way to any plot-relevant character or the audience.

Typos are notable, especially a bad habit of not capitalizing words, and the purple prose is heavy. Plus, several chapters are unreadable in this site's "dark mode".

Overall, this book feels a lot like a Shyamalan movie in text form. Great ideas, beautifully crafted scenes, and a whole lot of uncertainty as to what the story is attempting to accomplish.

However, unlike Shyamalan, this work can not only be salvaged by good editing, but made into a wonderful experience.