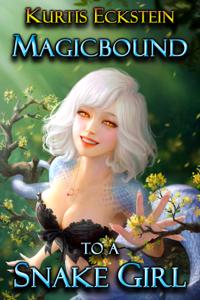 Magicbound to a Snake Girl

Alyssa Dracul has grown up her entire life an outcast due to the stupid rumors surrounding her absent mother. So when she finally makes a friend, she's not about to bat an eye at her serpentine nature. The only problem is, being best friends with a snake girl isn't as simple as it might seem, especially in a world that hates non-humans.

Will their friendship survive the trials that await them? And when the unthinkable happens, what will Alyssa do to protect her best friend?

So let's be up front here. This is not the kind of story that I typically read. It's really not. This is a sweet, fun, low stakes adventure that emphasizes friendship and fantasy elements. The fact that one of the girls happens to be part snake is besides the point.

I like angrier things. I like more violent things. Things with consequences and depth. On the whole, you won't find that here. Which is fine-because what this story actually is, it excels at. It's not the deepest story in the world, certainly not, but it doesn't have to be.

This is, start to finish, a great read, that's short, concise and clearly told. The characters are engaging and you want to follow them on their journey, and the total page count doesn't cross the 300 mark, which is a strength all its own.

This won't change your life, but it should stick with you. It will endear you to the characters and the world, and you will be wanting more by the time you're done.

Give it a shot. You won't be disappointed.

TL;DR: Magicbound to a Snake Girl is a sweet story about a deep friendship between two young women, and their interactions are cute. There is some mystery to the world that I find intruiging. Think of it like a slice of life anime with fantasy elements, just with more going on under the hood than normal. It's fun reading about a deep friendship where the only romantic elements are if you choose to see them there.

Style: I understood what characters looked like and what was happening at all times. Kurt's style is clear and direct.

Story Score: My only complaint is that I might have liked to see more of the meetup between Jasmyn and Alyssa. When my issue is that I'd like to see more story, I call that a good sign. I like the thought put into the world and the details of nonhuman characters' biology.

Grammar Score: There are minor mistakes here and there, but overall it's well put together.

Character Score: Jasmyn is my favorite. I really appreciated her strong loyalty, and she and Alyssa are a good main pair.

For full disclosure, this review is based on the previous version from Reddit Serials, which I read up to part 12. I haven't reread the more polished version on Royal Road yet, which I expect to be even better.

Reviewed at: Part 9: Bonded – Controlling My Magic, with Help

Big fan and want to read more of this.  IMO grammar is on point which is a deal breaker for me otherwise.  Good to see some talent on RR.

Favorited and followed :)  Just make sure you keep the chappys coming!  Don't leave me hangin.

I'm not sure why some people are calling this "sweet" or "cozy." Quite a bit of it is pretty damn dark.

It's great slice of life though.

Good prose, and clear descriptions of every scene. The author does a great job of keeping tension up, without relying on action. There's almost always something happening, and it's interesting to read about.

Very entertaining, but the pacing is really off. It probably works well when reading each update as they come, but when reading it all at once, everything felt very rushed. Or strangely slow. After 60+ chapters, less than a week has actually passed. It feels like too many events are being crammed into a short amount of time.

For a story about Alyssa and her snake friend, Jasmyn often feels more like a plot device rather than a character.

Since we see the story from Alyssa's POV, she feels like a fleshed out character, even within the few days that the plot covers.

Jasmyn on the other hand is simply handed a sad backstory, and has little to no affect on the plot beyond the first few chapters. So far, if she were replaced by a stray dog, the overall story wouldn't actually change that much.

Again, this is a pacing problem. It's only been a few days plotwise, but 60 chapters can't be considered "a few." Giving some chapters from her POV and letting her do something important would be a big help in fixing her lack of "characterness."

It's interesting, and I enjoyed reading it, but the pacing needs work, and Jasmyn is a severely underutilized character.

Yesnomaybe ... doesn't really work for me

Reviewed at: Part 60: Magicbound – Am I Being Too Intense?

Solid prose, that's a bit simple and without any sort of flourish, but generally servicable enough for whatever it is currently going on about.

However, I found the voices of the individual characters a bit disappointing. Particularily the heroine stops coming across as a teen quite quickly, and the parents are those "stereotypical book parents" that just consistently include "sweetie" in their speech to indicate that, yes, indeed, they are parental figures ...

Like a lot of stories on here this doesn't seem to have that much of a narrative arc. The classic bullied heroine finds a naga friend, then someone tries to kill her. After that it's pretty much running around in circles on that theme.

Pacing and structure feel off to me. Whenever something happens, it happens "right now", and consequences are usually rather lacklustre. For example, in the beginning a bunch of children are killed, but that's mostly brushed away. No funeral, no angry mobs, nothing. A scheming bad guy just dies off page and is basically forgotten. No relatives, no guilt, nothing. Whenever something new comes up, it just happens immediately. Some character having a secret? There's never any hints to it, it just gets revealed at some point. Never heard of sigils? You need to get one right now! And so on.

There just doesn't seem to be any build up to anything, nor any real pay off for anything. It's almost just snippets that are chronologically connected.

The heroine feels like pretty much the only one that is actually any sort of character, but then she's like in a lot of stories on here far too quickly far too powerful, and her reactions often don't feel like any sort of genuine teen either.

The snek friend so far, while nice to have around, feels indeed more like a plot device than any real person with her own will.

The rest of the cast is basically just there to intervene when the story demands, but never in any sense where you get that they are acting as their own people instead of whatever is convenient for the main heroine/story.

... this is the first time I need an extra category for a review, I think. In the comments, the author states that this won't be a romance, just an "open to interpretation close friendship" story (tag: not lizard). What I'd call this normally is bait. Now I'm not reading the rest of the story, so it might or might not feel that way in the long run. It needed mentioning, but won't affect the rating so far.

Side-note: The suggestion that this is because it's YA annoys me. There's probably no genre more saturated with romance than YA, for good reason, and it's not the 1950's anymore where we need to pretend that teenagers are incapable of love and uninterested in sex. Of course, if you just want to write a non-romance story then I'll happily cheer for you - but that's different from this.

It's cleanly written, which is more than can be said about most stories on here. And despite some issues I have with them the main girls are cute together. But there isn't anything that managed to make me curious about where this is ultimately going, and the stop-go story-telling I just find unsatisfying. At the very least, I'd want developments to be teased before they actually happen. Not just constantly dropped on my head.

Damnit I'm all caught up with the story so far. I was right to give it 5 Stars across the board.

Excellent writing so far I can find no fault I'm left wondering at aspects of the world and why more isn't said between characters sometimes but this only contributes to making the story more engaging.

Not everything is said in conversations things are left out said out of context or misunderstood that's realistic.

My curiosity is peaked please keep writing I'm getting a job soon and this story is one of the few things I'll spend money on through patreon.