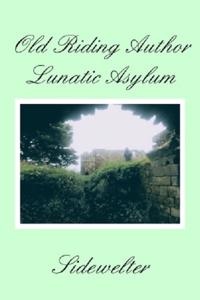 Just off the A19, in the dark, incomprehensible lands known as Yorkshire, there lies a town. A town where shadow-silent alleys glint with the secret hunger of knives. Where blood soaks the chipboard window shutters of forsaken terraces stretching off into the night. Where the smog-choked air rattles with the depraved laughter echoing out from clubs that can only generously be described as post-apocalyptic.

Well, that’s Middlesbrough. But down the A19 a bit (an impossibly long way down, actually) there lies another town: Raughnen, in the ancient, forgotten Old Riding. It is an equal match in muggery and thuggery alike. It also has magic spells and pointy wizard hats.

And now, across the miles and across all sensibilities, a pretty nasty power (a magic one) calls out for its pretty nasty counterpart (a decidedly unmagic one): a proper sound Boro lad.

Nothing good can come of it.

This is a collection of one novella and four connected short stories:

I. A Yorkshire Summoning

III. Heaven is a Parmo

In total, this comprises 34 chapters totalling around 35,000 words, so try not to worry. It will be over relatively quickly.

There are three more short stories with more tenuous links to the core collection: Rush, Paper Round and Scenario 79: Sausage Fingers, all of which can be found in my collection Short Records of Misadventure. Reading these may allow you to make more sense of certain parts of the story, if any sense is to be made at all.

NOTE: There are instances of prejudice and discrimination within these stories, including elements of sexism and ageism, which are purely the thoughts and actions of the characters involved and which certainly do not reflect my own views on these matters.

ANOTHER NOTE; A WARNING, PERHAPS: This can get a bit weird. In less than 150 pages, we have four viewpoints, first and third person narratives, and a completely disjointed plot with lots of gaps, dead ends and no real resolution. Also ZERO lunatic asylums. It's all a bit odd. If that sort of thing isn't your cup of tea, which it most likely isn't, it might be best to move on now.