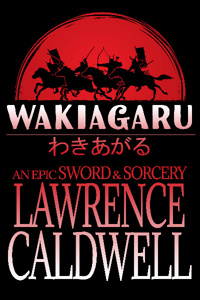 Ujio Sakuraichi sat tall atop his horse, proud of every single one of his men. He could see the line of fighting from where he was. As soon as Muji rushed behind the enemy’s line, he saw all that he needed to.

The daimyō wheeled his horse back toward his new base of operations, an old sentō bathhouse. The stacks were still smoking from two days ago when the establishment was abandoned.

He kicked his horse into a trot, the hooves sounding against the wet cobbles as his two captains followed. He needed to confer with them and the rest of his reporting scouts so that he could plan the next several steps.

The enemy, he had discovered not hours ago, was none other than the legendary general Hukama, known as the First Spear of Kachiiwara. Still outraged at this sudden attack, Ujio still felt a thrill rise inside him.

He stamped it out. As honored as he felt to be fighting the general these past days, they were vane emotions. Sakuraichi had an empire to rebuild.

That should have begun with the death of Kurosawa, he thought, galloping to the bathhouse now. He reached his base of operations and dismounted, practically jumping off his horse.

One of his soldiers caught the reigns as he rushed into the building, found his men at the common room table looking over maps. “The enemy has been defeated.”

His captain at the table looked up, nodded and allowed themselves to smile imperceptibly. But they were far from done. “We have much work to do,” he added, not wanting his men to become arrogant because they had won a few skirmishes in back alleys.

“We have reports, lord daimyō,” one of them said, bowing with respect.

Ujio unbuckled the leather strap under his chin and removed his horned helmet. “What is happening?”

“Our ranks have swelled to just under nine hundred men. We still have dozens of scouts and small teams of soldiers searching for any stragglers throughout the city.”

“Also,” the other man at the table said, “Hukama has become aware of our presence.”

“One of our ninja has reported that he is now utilizing the sewers in the northern districts near the sea. It will not be long before he has them completely occupied so we can no longer use them against him.”

“Occupying the tunnels will require many of his men,” he said. “The more of his forces we can engage throughout the city without the expense of lives gives us more of an advantage against him.”

A wry smile crept to the bearded captain’s face. “You are a wise leader, my lord.”

“Hmm.” He stroked his chin, looking at the maps. The vast majority of Hukama’s forces were at the foot of the plateau summit, cut off from his command as they protected the emperor, but he still had many areas within the city that were well occupied and unassailable.

“What is our next move?”

“We have nearly a thousand men,” he said. “We can wait. Wait for our forces to swell to a size large enough to challenge Hukama. Or we can be bold, strike now, or strike soon and surprise him. I do not believe that he yet knows the size of our forces.”

“But should we fail,” my lord, the bearded captain said, “Mikuma will be doomed.”

“As things are, the empire is already doomed. If Hukama captures or kills the royal family, all is lost. The moral of our army will shatter.”

He interrupted. “The other daimyōs are weak! I am the only one fighting. Where are the others? Do you see them? If you know where they are, hiding in their manors up in the mountains, tell me.”

His captains remained silent. Finally Ujio added, “We attack soon. Soon or Mikuma will be lost, and we all become rōnin.”

So far a few people have taken the poll on the previous chapter about which characters they like the most. I'm glad to see some the participation! I'm a bit surprised with the results so far as well, but lets give it more time to see if things even out.

Bio: "I’m a businessman. My family has a seat in the Dwarven Merchants Guild. Merchants buy and sell goods. Businessmen buy and sell stores. In my spare time, I manage a spy network. And occasionally, I write books."--Varric Tethras

- The Wind Steppe Princess and the Amalfi Magician: A Fantasy Romance is on going...