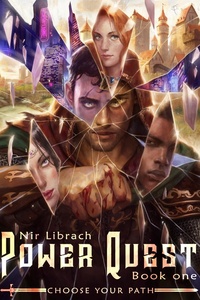 Ben could never afford to participate in the virtual version of his favorite role-playing game, so when the opportunity presents itself he takes it with (almost) no second thought. His life changes instantly: building a strong character in this virtual and amazing world becomes his one and only desire, and there is nothing he wouldn't do to achieve his goals.

Little does he know, but his quest for power does not go unnoticed; powerful people are watching his every move, with plans of their own... plans that might change the fabric of reality between both worlds. Will Ben's lust for power destroy everything and everyone he loves? Or can he be strong enough to become the one thing he always dreamed about... a superhero.

* Your reviews would be most welcome :)

it took me a bit to get into it, but the whole vr dnd thing was actually pretty coo. Fun story man.

Not a better love story than Twilight.

Reviewed at: Chapter 50: The Fate of Two Worlds

To be fair, I loved the vast majority of this story for the first 34~ chapters; it has all the best elements of a great adventure fantasy while pulling off the science fiction angle better than I ever would have thought.

But there are some irreconcilable issues between my presonal preferences and certain aspects of the story that seem to be getting worse (for me) as the story progresses.

Like how the MC and female lead fall deeply and madly in love after spending less than 8 hours of game time together (didn't even get to 1st base), the first 4h of which are mostly her trying to get info from him via seduction and standing really close while he awkward-flirts with her and the other lady party member. Their post 8h courtship is a whole new level of cringe.

Most are just general inconsistencies, problems I have with the MC, obvious ways for the characters to profit that are simply ignored, etc.

There's one scene after they defeat a necromancer (that they don't bother finding the loot from) where 5 treasure chests are blocked off by big rocks; warrior tries and fails to move boulder; MC finds hidden treasure chest; warrior gets literal boulder breaking knuckle dusters; warrior shatters boulder that isn't preventing access to 5 chests to show off; they leave. '_'

If you still like it after ch38 then confidently continue reading with the knowledge that it only gets better... if you have doubts, you can bail without missing out.

ps: there are a couple of points where characters say something like "me and no other" when a western english speaker would have said "the one and only"... other than that and a few random errors, the grammar and english are good.

Reviewed at: Chapter 51: A New Quest

This was a great read for the majority of the book.  My single point of complaint would be that the last few chapters seemed somewhat rushed, but it was obviously written with a sequel in mind.

I'm really hoping said sequel appears, as I would love to continue reading about this world.

A brilliant an bit complicated story with fascinating characters and few surprising twists that sweep you right from the start.
The hilarious and tragic plot mix in a well built world, that takes you throgh a rabbit hole that getting deeper and deeper, Ben is just someone I would love to see in great blockbuster movie one day..