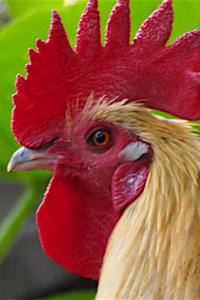 Grover had been battling his sickness for a long time, and he was ready to find peace in the afterlife. Unfortunately, when he opens his eyes for the first time after death, he realizes he's inside an egg! What the cluck?

Join Grover as he discovers his place in the pecking order of this new world. He may be winging it, but he certainly knows you've gotta break a few eggs to make an omelet.

It's a little early for the story to have a review, but I figured that one might convince potential readers to add this to their bookmarks. So far, the writing has been solid, and the premise is interesting (I'm a sucker for monster MC's). This review will obviously be updated in the future, but until then, do stick around!

I'm very interested to see where this goes. Thanks for the hard work. I'm rooting for you!

Easy and fun to read

Reviewed at: Getting Cocky

So far it is consistent and easy to read. Let's see how it develops but the authors style is good

There isn't much material yet, but I still think there's enough to get started with. Being a fan of non-human characters, this story immediately called to me and I was pleasantly surprised. It remains to be seen how well the author will maintain the progression, especially since it isn't uncommon for authors to struggle with providing a direction once the MC is strong enough to survive local threats and inevitably interacts with humans/sapients. Hopefully, that won't be the case here, but it's worth noting the possibility when reviewing this early on.

Outside of concerns for the future, the mechanics of the story are solid. The writing is clear with little to no mistakes and neatly formatted to boot. The leveling system is straightforward, as is the evolution system, with specific levels acting as the trigger point. The puns are respectfully used and well-spaced, which is quite important in any story. A further point in the author's favor is that the MC didn't begin by acquiring a legendary skill, or accidentally killing an incredibly high-level monster to shoot them up in power.

Given the starting quality, I'm optimistic that this has the potential to turn into a great story. Once this page has a few more chapters under its belt, I'll update this review to provide a more accurate accounting. The idea of an Arcane Cock rampaging through the forest is far too entertaining for me to ignore this.

The story, while early seems to be off to a good start. There are elements of comedy but that seems to be a side focus. The MC, while a little early, seems like he'll be fleshed out more. I would definitely recommend reading it.

Its nothing special nor new, with its lackluster plot that has been done a thousand times over, And not to mention a whole chapter of info dumps that's not even disguise in its early chapters. For consolation, it is, at the very least, readable.

Reviewed at: 10. Through Chick and Thin Part 1

Nothing unique yet, but shows potential. It hasn't had a chance to depart from the "reincarnated human as creature discovers they're in a fantasy world" stage. Apparently abandoned early on. I have not noticed any grammar or spelling errors. I may update if the author ever writes more.