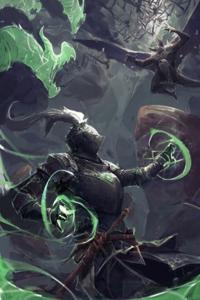 It was mostly playing around, they rotated between swimming and training. Farley taught Paina how to swim since apparently she cannot.

Did they have a swimming pool here? Why Terry and Farley seem used to swimming? Maybe they have a floating blob of water the size of a football field where people play blitzball... meh, no need to overthink this. It's another world Viers, another world with magic in it! You are not here to make a thesis about the world, you are here to enjoy it.

The four of them continued for a few hours before they were finishing up. Viers refused their offer to go back together, he still had extra experiment left.

“We are going ahead Viers, you sure not coming with us? We are going to buy the popular new treat going around the Coalition, I think it's called ice cream,” Farley offered another invitation.

“Thank you for the kind offer Farley, don't mind me and go on ahead, enjoy the ice cream, I tasted it before and it was great,” Viers replied Farley with a smile. They left and finally, Viers had some space for himself.

Now that I’m here, I should check my breath. Viers already have a plan to check his breath capacity so he brought his pocket watch and place it beside the pool. He makes note of the time, takes a deep breath, and dive.

After 30 seconds Viers felt it was painful to go on, but managed to hold on until 50-ish seconds before he went up gasping for breath. His breathing was heavy and coughed because he swallowed some water. While taking oxygen he confirmed the time on his watch. Not even 5 seconds past he took another deep breath and dive again.

When he went up, Viers was coughing again and look at the time, this time he'd only managed to stay for 40-is seconds. He repeated this a few times to get more data.

So my healing factor has no effect on my breath, my lungs capacity is also like normal humans, logical I suppose, no underwater combat for me for now. Viers thought.

His training of Mana-mastery seemed to have no effect and he was a bit frustrated. It's still in the early stages Viers, no need to get your hopes up, don't forget you are tier 2 talent, it will chain you down more than others, this is within expectations. Viers let out a long sigh and went back to the dorm.

Just as he was about to go back, he met Teldo on the way out.

“Hello Mr. Teldo, may I ask you something, sir?” Viers greeted the muscular man.

“Mmm.” he answered, nodding his head in recognition.

“How long do you estimate before a tier 2 talent can start to manipulate their attribute?” Viers asked.

“Six weeks give or take if the kid is diligent.” He said plainly.

Viers remained silent for a while after hearing the truth before replied.

In the blink of an eye, one week had passed.

During the week Viers continued to train his body, running every morning, push-ups, sit-ups, and so on. Though he continued his exercises regularly, the effect on his body is negligible, he reckoned he only lost one kilogram, his body is still fat and plump. Viers suspected this is a side-effect of his healing factor.

Why is it so hard to lower my weight? Ordinary people would be lost 3-5 kilos by now, don't tell me my fat get healing factor too? Did it regenerate? Damn itttt… Viers thought in indignation.

Viers kept training in Mana-mastery diligently. Any free time he could spare, he used it to meditate. However, he didn't make any progress. Sometimes he had a faint feeling of something but it was gone the next moment like a flash of light.

Apparently Max managed to make some headway, on the seventh day of Viers coming to the Training Center, when Max was cooked with the other fire-type kids, Max made the bonfire dance.

He said he was just trying to grab and pull the fire and it worked. When he tried again he didn't succeed but the achievement was there. He was the first among Viers's group to make a breakthrough in Mana-mastery.

Max was showered with praises from his friends and teachers, other kids looked at him with envy in their eyes. When his friends kept asking about what tier he was, Max finally relented and answered he was tier 4.

Hearing Max’s success made Viers depressed. Why can't I be like those various MC in the novels that managed to master their power in the early chapters…

There was an increase in the trainee’s number, they were now seventeen kids in the TC. The new arrivals come sporadically during the week, Nakala said only three more before they had a full roster.

At the class, Nakala continued to teach many things, about Mana-mastery, a bit of history, list of dangerous monsters, knowledge about the flora and fauna, things of note when adventuring, and the like. The math class continued sparingly, it was evidently not a priority. Primary level math was not a problem to Viers, he noticed that there were no chemistry or physics class.

On the other hand, Teldo mainly supervised the training outside the class, other than keeping an eye during the trainee’s field training, there were also compulsory lessons about physical education every two days.

The PE was similar to Earth’s, running on the field, body exercises, and team sports games. Viers noted that some of them were familiar to him, like soccer and play catch. It was said the trainees would learn about basic fighting from him after more of them managed to make progress on Mana-mastery.

The two moons were bright tonight, Viers just finished his usual training with a glass of water and he wanted to inhale some night air to refreshed his mood. He opened the window, moved his chair near it and did some moon gazing, the view reminded him of the night where he just came out from the cave.

Status report… I have been training Mana-mastery for a week, Max just barely able to accomplish some resemblance of magic but he was tier 4 and it was far from decent, for tier 2 like me Teldo said six weeks but it was impossible to know for sure how long it would take.

At any rate, repeating just this kind of routine for the coming weeks isn’t an option, unlike other kids I don’t want to waste my time doing things that slowly, I must take action and investigate other options for my growth.

My healing factor seems biological or at least looks like it, it may be magical but my money is on biological because... in the movies and stories, it’s because of mutation! Bald professor leading men in spandex and all that, what else could scream mutation more than that?

If it's magical, I already use my full effort in Mana-mastery training anyway, what else could I do more at this point? Invoke a blood sacrifice ritual to a demon and ask to make my healing factor stronger? I'm not ready for that yet... YET, I emphasize once again. Don't mess around with otherworldly beings when you're still weak Viers, it never ends well! Except in movies rated G, for general audiences, and this world is not rated G! Kids are not safe here!

Back on track Viers... let's assume it's biological for the time being, so how could I improve it? I'm already lucky this mutation didn’t cause cancer or thousands of other undesirable mutations for me, but now I want to mess around with my genetics?

…Yes! Yes I would! I am not reincarnated here to accept being ordinary! My talent in Mana is already below average so I must take every advantage that I can get. I know there's some risk so I must start slow, a nibble here and a munch there, at any rate, I must move forward, I must experiment!

Now how could I improve… biologically?

Those are the words that come to my mind, I don’t know the validity of this yet but it’s my only way forward. Will I become some meat blob mutant or a beast who always hungry for flesh and blood? I prefer to not turn into some monstrosities if possible, I should only consider shedding my human form if there was no other way.

Should I start planning to eat humans? No, too hasty for considering other humans as prey to be hunted and butchered for meat, in this magical world surely there are other materials suitable for my… upgrades. And attacking other humans have consequences, I am not ready for it… yet.

So Viers, you are a little larva that wants to evolve, what is your food?

The answer is I don’t know, for now, I will eat anything that seems possible to make my healing factor stronger. My main targets are monsters!

And yet I am too weak to kill monsters, Nakala said monsters are physically powerful and may have special ability. Despite my healing factor and somewhat above average physical ability I am just a chubby human kid.

Then I must take a step back, start smaller, animals shall be my prey… and plants, who said plants cannot upgrade my healing factor.

That means I have to go outside the town, and… wait, how about poison? Eating plants may have poison in it, though my healing factor supposed to be a plus point against poison. I am not going to risk dying because I ate some green plants on the side of the road.

Come to think of it, I did eat quite a few of various berries and fruits on my way to the hunter's hut where I met Gary and Collins but I seem to be fine afterward. No sign of poison whatsoever if any of those had poison in it. Hmn, this is good news but I should double-check it just to be sure. Tomorrow I have to buy some poisons and drink them… the non-lethal kind first.

Alrighty then! I have my plans for the next day lined up. After class, I have to buy some non-lethal poisons and… should I buy leather armor for protection? I don’t think I can afford the armor, I am not exactly swimming in money right now, I supposed I don’t need it anyway, pass for now.

I still don’t know if eating other life forms could increase my ability but what else could I do? If I have to be a Z*rg to get stronger than so be it! If I have to prey on others to be strong what’s the problem? The world is always about the strong prey on the weak! Those that did not accept this truth are lying to themselves.