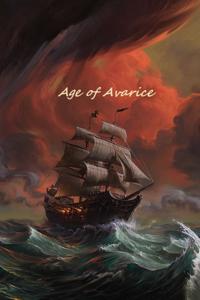 Earth finds itself on the cusp of a new age. Technology has ingrained itself into daily life like never before, and soon, it will allow humans to transcend the boundaries of space and time to enter a new world. Well, a new digital world that is.

Age of Avarice is hailed as the world's first truly immersive VRMMORPG. And the denizens of The Shattered Realm similarly find themselves entering a new era as they begin to explore the Abyssal Sea in search of lost land, knowledge, and most importantly -- wealth.

Sirius is a young man who has followed the development of this game for the past year-and-a-half and the long-awaited launch day has finally arrived. He enters the game, not for fortune or fame, but to simply make a living doing what he loves.

However, he quickly realizes that Age of Avarice is much more than he bargained for...

A good VR game story, a pleasing read, the MC and his group aren't overpowered, even if Sirius, is a gamer, who make the good choices at the creation, contrary to other players he don't possess for the moment (ch.7)  any profession. I loved the reactions of some players in the first chapters " the type who take a quest without reading the text". Sirius group appears as sympathetic.

The writing is correct and the style agreeable. The characters, players and NPC, are well-drawn. I will follow with interest.

TL;DR: It's the standard recently adult gamer playing the world's first VRMMORPG. Refreshingly uncluttered by walls of exposition or overcomplicated system, with an MC unusual by his lack of the "super duper uber upbringing" or a mysterious past. Just a guy and his adventures ingame. Oh, and a nice set of premise and characters. Excellent.

I like this one. I've recently found about four of these litVRMMORPGs in trending fictions and all of them vere different. This is the second one that made it by my standards.

The first one that made it uses a complicated system and is a do-over story (character woke up with his memories in his younger body back in time, getting the chance to "do over" the mistakes of his past), so this one is actually nicely different in it's honest focus on action adventure and character interaction.

The system is also refreshingly easy and uncomplicated. And thanks to the gradual immersion and exposition we're not forced to wade through walls of exposition text explaining every single detail, but are left to discover everything with the MC gradually.

Also the MC. He's not the cocky brat, nor is he the mysterious sociophatic chunibiou (or how is the blasted term written) or the all knowing proffesional gamer god. He's good, but not the best. He's lucky, but not overly so. And most importantly, he is a thinking breathing feeling being. We're not given seven chapters of flowery dialogs before even getting to the game, but we're also not left with only his inner musings and blue screens to explain what's going on.

The style got a bit of a cringe from me at the start, mainly because the last litRPG that tried that flowery descriptive adjective ladden style used it for every bloody thing that happened and cranked it up to eleven.

I pretty quickly got bored of "the heavy stinking lines of water cascading from the dark forebonding skyline filled with cumulous cloud so thick...", you can probably imagine the rest. Now imagine this style used for every door, every adventurer, every NPC, every stinking piece of gear.....

Luckily, here it's used in moderation. I did utter a single inner sigh as I started reading the first paragraphs, but my wariness gradually receded as I got more and more immersed in the story and I really can't tell you if the style was the same at the end of the first chapter. That's very good, because if you don't know about any particular style of writing being there, then it's doing it's job. Anyway, kudos to the author for actual simple uncomplicated readable action adventure.