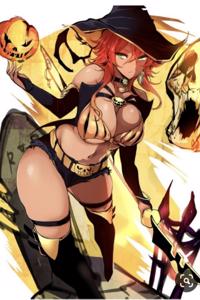 The bus stopped not long after his discussion with his sister.

The passengers streamed down from it one after another, with Sol being the last.

Currently, Sol was wearing a rather simple attire. It was a costume composed of black pants and a shirt with a hood over his head.

After stepping down from the bus, he couldn't help but look at the little white building in front of him with a hint of doubt in his eyes.

'Is it really the place?'

He looked at the map displayed by his ring to be sure, but since it clearly indicated that he didn't make a mistake, he decided to stop wasting time and walked towards it.

The interior of the building was rather plain. It was nearly void of any form of decoration. The only two things present were a table and a chair. On the said chair, a woman was seated.

She was beautiful. The kind of beauty only obtained by mature women. She was rather tall for a woman, standing at more than 170 cm. Her plump body added to her black hair and her tight white office lady style of a suit should have filled the dream of many men. She wasn't a seductress. Her charm was more of the motherly type.

Sol observed her without being rude about it. Inwardly though, he couldn't help but wonder if she would be open to know him more intimately later.

The woman, seeing him, stood up and said calmly, "Welcome! how may I help you?" All that with a perfect smile on her face! It was the kind you couldn't help but like even though you knew it was given to many before you.

Sol quirked his eye brow in wonder. He had to re-evaluate her. She was good. This made her even more interesting in his eyes. After all, he was rather fond of mature women. From his experience, they were always fun to be with.

He must have been spacing out for some time since she called him once again, "Mister?"

"Ah..excuse me, I was too deep in thought. I must say that you're really beautiful."

She smiled even more. It wasn't the first time she was told that, but everything depended on who was the one to say this. The one in front of her was extremely handsome.

Sol began to walk toward then once he was at a certain distance, close enough but not so close that he invaded her private space he asked.

"Could I have your name firstly, please?"

"Oh!! how could I forget? I am Nicole du Pont, one of the administrators of the test," Said Nicole, always with the same smile.

He didn't really want to give his name. But he couldn't lie either.

Nicole, hearing his name, had her perfect smile cramp a little, just for a split second.

Sol, who was observing her, couldn't help but praise her self control. Most people who heard his family name would be frozen stiff or gawk for a few seconds.

"*Ahem*" Nicole, in order to dispel the awkward air that was settling in, coughed a little and then had her smile came back as if nothing happened.

"Sol Heracles... I see. I'm in charge of doing a preliminary test to weed out those who overestimate themselves but, knowing your noble lineage, such a test would be a waste of time." She was behaving more respectfully; such was the power of the name Heracles.

Sol wasn't surprised by her attitude change. Still, he couldn't help but ask, "Are you sure I can pass like that? isn't it a little too biased?" As he spoke, he leaned a little on the table and looked at Nicole with a teasing smile.

He didn't really care about the test. But teasing a beautiful woman was one of the few things he truly found interesting.

Nicole didn't avert her eyes as she continued to smile. She could see it in his eyes. There was no lust in his eyes. For him, this situation was just a game. She didn't really want to become the plaything of someone a few years younger than her.

"Do not worry, sir. All the members of the 14 great families are exempt from the preliminary. still, for the rest of the test, they will be basically treated like any other." Was her answer to his question.

Sol saw that, despite her smile, her body was a little rigid. As such, he backed off a little. He liked to play around, but that doesn't mean that he liked making people uncomfortable. Even more so when they were woman.

"I see... Ok, I understand. So, what will be the content of the second test? " asked Sol curiously.

"Sadly, I cannot answer this question," She seemed troubled. Sol gave her a small nod. Even though he couldn't understand the need for such secrecy, he still respects the rules imposed. "So, what next?"

"Now, you'll receive a random number. After that, you'll pass through the door behind me. There you will find yourself in a fully furnished room, and you'll also meet the other peoples who, like you, passed the first test. you'll have some time to familiarize yourself with the others before continuing on the next phase." The door in question being pointed at by Nicole had nothing special at first glance. Still, such an impression would be a mistake.

This door was a dimensional door. The principles behind its functionality were rather abstruse, but in short, this door was connected to a room that was present in another building. This kind of door allowed safe and fast travel most of the time and was basically a necessity for most.

After observing the door a little, he decided to walk toward it. In his mind, he thought back to his conversation with his sister. The whole thing was too fishy. Helen wasn't usually that pushy when asking him to do something.

Still, even if he knew that something was weird, the knowledge that his sister would rather die than harm him and the fact that he already gave his promise made it so that he had no choice but to continue. Now, he could only hope that the next test wouldn't be too hard.

After the departure of the boy, Nicole couldn't help but relax a little. Even though he seemed harmless, she knew better than to believe his appearance. All members of the Heracles family were crazy warmongers. Even the more mellow of them were still bloodthirsty enough to give the chills. Their names were even used to scare children in their community.

"What does a member of that family could learn here?"

Even though the stars academy were the best of the best, be it in resources or teaching, they were still a level below that of the Heracles family. Unlike the other noble families, they didn't really need the school to make connections. She could only hope that he wasn't here to cause trouble. Also,

'He is really a player.'

She smiled a little as she looked at the ID number written on her desk. She noted the ID with her ring, deciding to keep it. She never had an adventure with a member of the noble families. The girls in her pack would be so jealous.

While she was pondering, a man entered the building, his step light, almost soundless.

He was wearing a black suit with a golden ring with the number eight engraved on it on his middle finger. A white mask covered his face.

While he was clearly someone dangerous, he radiated no aura, and that in itself was even scarier for obvious reasons.

She immediately knew what kind of man was in front of her. He was a member of a secret organization in the service of the Heracles family. The members were known as numbers or faceless.

All that was known was that only the leader could order them.

"Madame du Pont, a pleasure to meet you," said the man with a low bow. Nicole couldn't help but frown.

A member of the Heracles followed by a faceless. Meeting two such people back to back was too much. She wondered if today was an unlucky day.

"Mister eight…" She said as she looked at the number on his ring. "Sadly I cannot say that the pleasure is shared. To what do I owe this visit?"

Eight, not caring about the way she talked, still answered like a gentleman.

"Not much, I was just entrusted with a mission from my master."

"Exactly... Do not worry. I will not ask you to change your test or play favorites. I just want to give you some... Let's say suggestions."

Just as they were about to discuss, a young woman entered the building. Her attire was rather eyes catching. She was wearing a rather eyes catching attire consisting of a brown and black school girl uniform as well as a large pointed hat that hides her features but still allowed her long silver hair to show behind her. In her hand, she was holding a rather large book with a white cover.

Nicole, like the professional she was, immediately cast aside the number and walked toward the girl.

“Welcome. How may I help you?”

The girl raised her head, showing her startling silver eyes behind the round pair of glasses she was wearing. What surprised Nicole the most though, was the almost disinterested look on her face.

The girl, in a beautiful but monotonous voice, asked,

“My name is Emilia. I want to participate in the test."

Her bluntness was a little off-putting, but Nicole was used to facing all kinds of guests. She could easily see that this girl wasn’t doing intentionally but rather was a socially awkward child.

“Ok. Follow me to the next room. We will do some simple tests.”

She didn’t spare a glance at number eight as she took the girl toward another door.

A few minutes later, Nicole with a trembling hand covered in frost, said with a cramped smile.

‘I really need to ask for a raise.’