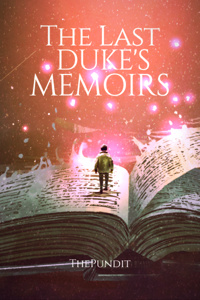 The news about the Knight spread as if it had limbs of its own. Falling from one ear to another akin to summer wildfire. It triggered the curiosity of the entire village. A piece of news in which each household had its own version of the story.

Some young men even bragged about what they saw in the plaza to the young ladies of the village. They puffed up their chest as if they were a protagonist of a heroic tale. Of course, they were not. The fools adding sweet nothings to their every word, young but already liars.

The young ladies giggled sweetly. Their titters turned into sweet but poisonous honey, making the young men brag to the point of insanity.

The village elders were looking daggers at the naïve youths. Some even shouting at the young brats to help in tilling the fields. The hoarse shouts sank into deaf ears.

The young ones still ever busy with their bragging. They would shout ‘okay’ or ‘I’ll-go-later’ to the elders. Then eventually forgetting it altogether in a few minutes.

This was a daily happening in the village of Lother.

Meanwhile, the married women of the village gossiped like disturbed chickens. Chortling about the secrets of the Madame’s beauty. Wishing to learn how the Madame maintained her beauty after carrying three children.

After all, no women wished to be neglected by their husbands. Wanting to become beautiful was something inherent in every woman.

Although they couldn't ask the Madam. They would ask the maids who serve the Madame later. Perhaps, they knew how the Madame kept her beauty.

The other villagers and elders discussed the village issues discreetly. They were thinking about the fresh changes that the newly assigned lord might put in place. They also planned to raise some issues about the village. Though, some of them dreamed to become one of the lord’s stewards by showing their worth.

After establishing his merits through the monster campaigns enforced all over the country. Knight Brooks earned the trust of the Baron and the current King of Rutherford. His exemplary courage and wit in battles earned him a rich award from the Baron and a fief from King.

During his three years stint in the monster subjugation army, he led a lot of victories. He conquered a lot of lands that were once infested by monsters.

He also saved a lot of soldiers which included the Baron. The knight earned the admiration of many people, some of them even followed him. They even awarded him with a fief - the village of Lother. Though, it’s a village in-name. The fief was even bigger than most of the towns.

From here on, the former landless knight became a pioneering knight. The knight had finally succeeded through grit. The King ordered the knight to help in the wilderness's development near the village.

“The village of Lothar is around 2000 acres alone.” The white-bearded elderly village chief seriously reported. “Aside from that, the size of the forest of wilderness is still unaccounted for because of the presence of dangers. It is also full of wild animals and monsters. Still, the forest of wilderness contains abundant resources of nature. Though... mostly fraught with danger. We currently have about 73 families living here, over 600 villagers. We also have self-learned carpenters, forest foragers, hunters, farmers, few militiamen, etc.”

The village chief was trying his best to get the new lord to recognize the exact value of the village. He knew a simple snap from the new lord would affect the lives of all the villagers.

The pangs of passion coming from the old man received the nod of the other village elders. Knight Levo was also continuously nodding along with them. He acted as if he understood the explanation of the old chief. Acted.

The look of approval from the knight truly appeared genuine.

“Lord, what are your plans for the village. Should we expand to the wilderness? Plant more crops or focus more on foraging?” One elder asked. "How about the trade and caravans? Would you put in place a new policy or continue with what we have?”

The questions carried the hope of the villagers for new ideas of development. The people seemed to expect a lot from the lord. Yet, looking at the dumbfounded face of their new lord. Their gazes wavered and dimmed.

It seemed like the knight does not know much about land management.

Seeing that face, the village head thought that the lord… was indeed more of a warrior than a manager. Something common to new lords originating from the military. They were nobles but had zero experience in managing lands. They were good at wars and battles but bad at managing their lands.

Streaks of disappointment immediately flashed in the elderly village head's face. Even so, he immediately hid it from the knight and everybody in the room.

"I would be the one assisting my husband in issues about the management of the fief. Including policies, taxation, and land distribution. Now, introduce yourself and your duties to your new lord.”

The wise look of the madame eased some worries of the village elders. A sighed of relief escaped especially from the old chief. The simple yet concise introduction of the madame was rather effective.

Soon, the villagers introduced themselves one by one.

“This old man is called Bose, at your service lord Knight. I am the current village chief. I’m responsible for overseeing the entire village. Accounting and distribution of harvest and yields are something I also handle. I am also the one who received the sealed letter of the lord Baron.”

“Lord, I am Zaan, the head carpenter of the village. I build and repair houses, sheds, and tools.”

“Higgs! Sir Knight. I’m the head hunter of the village. I scout the forest and wilderness for resources needed by the village. Hunting wild monsters to prevent monster overruns is my responsibility. We also foraged foods such as vegetables and berries from the forest from time to time.”

“Gil, my lord, I am the herder. I take care of the domesticated boars, goats, and cows of the village. I usually bring them daily in the nearby grassy hills.”

The introduction took a lot of time during the meeting. It seemed like the madame was trying to get as much as possible information from village elders. The focal point of the meeting focused on the villagers and their jobs. Then the madame's questions revolved around the goods, peddlers, and skills of the villagers.

After the initial show of anticipation, the faces of the village elders became glum. The introductions and queries dwindled the interest of everyone.

Some elders wondered why the Madame insisted on knowing such tedious things. If they were in her position, they would rather talk about the new gossips coming from the nearby town.

Forcing to keep their eyelids in check, they nodded to all the introductions. Feigning attentiveness was their answer to this dreary experience. Some of them even couldn’t wait to return home.

Well, anyway, it’s rare for a village to have a lord presiding over it. Usually, the management of the village fell into the old chief’s hand.

The usual routine was to follow the orders of the chief, then finish it. Though they thirst for new interesting things, most of them don’t even put a little effort to do something new. As long there was food and water on their tables, all things were good and well.

Never did they knew the noble couple was assessing them. Watching their every movement, yes, everything. From the elders' room-exploring eyes, soft yawns, and even their unsettling fidgets.

The meeting continued. The madame only showed a beaming smile after each introduction.

Seeing the madame's grin, the attendants of the Lord’s family all smiled wryly.

Seeing the madam smiling, the esquires immediately went away. They told the attendants that they would patrol around the manor for a moment.

The gentle smile of the madame was a bad omen. A simple simper carried the heaviest plots they knew in the knight's household.

The village elders had offended someone that they should not.

An amateur writer trying to enjoy the process of crafting words and smiting sentences. Not a native English speaker but an avid reader. The ultimate goal is to turn this hobby into an income-generating craft. Anyway, I usually reply to comments during my free time. Lots of love.