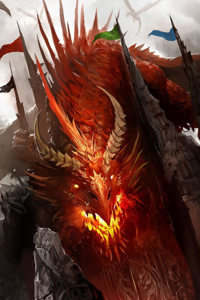 A challenge and skill

Ok damn I feel bad that I hadn't uploaded in a while sorry I've been busy but hopefully you guys like this chapter.

If you do leave a comment and let me know your thoughts.

Upon landing a crater formed beneath his large mass, and as soon as he landed one of the creatures the smaller one immediately lunged towards one of his large claws trying to flip him on his back even though he was far bigger than it.

Of course he immediately lifted his claw up as soon as the smaller creature lunged towards him crashing it down on the side of its head pinning it to the ground instantly.

Looking down at it he finally was able to see what it looked like, it sorta looked like a bat back on his earth but it's wings were incredibly small and short and it had a muzzle like a fruit bat and it's ears looked like a rats, big and round looking sorta pulled back and small spikes were littered through its spine and wings like a porcupine.

Looking at it a little more focused he tried getting a screen to pop up again like last time, after a few more minutes he decided that it only pops up randomly and it was not in his control which pissed him off but I guess that's life for you.

A species of bat that while small has an extremely painful bite and hunts in packs normally which helps them overcome larger predators or prey then themselves.

After reading it he was confused if it knew it was a small species of bat, why would it try and flip him over knowing it didn't have the necessary physical strength to do that, was it imitating how larger predators fight or was it plain stupid.

Deciding that it was just incredibly stupid he decided to kill it for extra meat and exp, lifting his large claw up he slammed it into its ribs piercing its hide easily and in the process cutting deeply into its heart making it suffer for a while before dying.

A snarl sounded inside his cave though as he did that, looking over at the other creature he decided to kill it too cause why waste exp.

He suddenly felt a weird sensation in his back leg, he twisted his muscular neck back looking down at it seeing another Dragon gnawing on his leg like it was the juiciest thing ever.

Wincing a little at the painful tumble he just decided to figure this stuff out in the morning cause he was tired from catching a giant snake too killing a puny rat with wings and giving his sibling a beating across the ground it was an exhausting day too much running for his large bulk to handle and he promised himself he would force his younger sibling to do all the running when hunting prey down leading the prey right into his mouth.

Salivating at the thought he fell asleep with dreams of burning down kingdoms and ripping apart mountains just for the fun of it.

A note from Skullcrusher1234

Ahhhh what a peaceful little shit anyway my bad guys and girls and whatever transgender people reading this I didn't schedule for that chapter to upload it was supposed to be this one but later on cause I was still working on this one and didn't have enough time to even do it and I only had like a 100 words for it so I had to finish it fast.