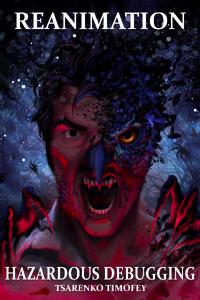 Once upon a time, there lived an ordinary man. He lived among us, maybe some of you even knew him. And then he died.
Explosive rounds shot to the chest aren't very good for your health. His body was buried, his brain preserved. Three centuries have passed.
Our descendants discovered the old refrigerator with the brains of their ancestors, took our hero out of the ice, digitizing his persona, and implanting him into a videogame.
Little did they know that they fulfilled the terms of a contract to their demise. Because Fillin doesn't intend to spend an eternity in this digital playground even if though there's no difference from the real world.
But the only way he can return to reality is to become God in the game. And so our hero sets foot on the Path of the Gods, ignoring the facts that he is followed by a walking nightmare named FreakHead, that the skies mock his every step and that anyone who looks upon him sees the title "Bringer of Chaos."

Has a hell of a start. Leaves enough to the imagination to keep you guessing, and shows enough to keep you looking. I'd recommend this to anyone that is tired of all the "everything is gonna be ok" stories. Will re review later around chapter 20 or so

My goodness, the story has a job at the post office because it delivers! And more importantly, it's all so human, with all that that means. It's beautiful, and terrifying, like an anology I'm nowhere near as good a writer to make!

I honestly do not have the words or language to describe the sheer amount of fun this is.

An old soul having glorious fun shattetimg the staus quo. The boring boyscouts irl and in fiction may not appeciate it but by the nine divines....this is some amazing writing.

Reviewed at: Excursus I Somewhere in the real world.

Read a few chapters not enough for a detailed review...

I'm not a big fan of first person perspectives in books

Did I ever tell you what the definition of insanity is?

Admit I'm not a fan LITRPG genre. Probably wasn’t. I love SCI-FI. But this book... Author... Ahem. Filin pulled me in he's madness. The author can make impossible. He combined all my favorite genre's. Yeah, book has a little swearing but that's man (author) so skillfully weaves it into the text. What is impossible to hold back a laugh. Rly im cryin') God damn! I almost got a heart attack when thought that everything will end on the first book. But mr.Tsarenko struk me again. It's really unbelievable. I wery recomennded to plunge in madness world of Filin. I can't give y'all recension. Just my emotions. I hope u to fall in love, in history about Filin and he's suffering team))

i dont want a review title

The first book of the trilogy in the genre of "Litrpg" or “RealRPG” "Haphazard debugging" was published in 2017.

It was written by relatively unknown modern writer of great potential, , which has few books "LitRPG" by the writer Timofey Tsarenko.

These are interesting humorous and chaotic books. What we even said the nickname of the protagonist of "The Filin, bringer of chaos.” As for negative side this work has some vulgar words, but not so much.

The book begins with the fact that the hero finds himself in a dark room with a man in the middle. The only memory is a few unplanned holes in the body and followed by darkness. It's untreatable.

However, it was explained to him that in one of the points of the medical contract of 2024, it was said about the freezing of the brain after the death of the body. To get into the real world, you need to earn 300 points of social significance or become a God in the game.

After short reflection and some pampering he decided to become a werewolf, with the second form of "owl" and Mentalist on class. One of the most difficult races and no less difficult class.

After mental team before the face of comes the sky with three moons. Hard and old shirt and pants a little uncomfortable, the ropes on the hands and feet do not allow to move ... and begins one of the many exciting stories.

The ending will surprise you as the secrets and intrigues are finally found out.

I do not recommend this book to those who have not yet formed as a person and find yourself.

But I will not scare you ahead of time, as the author says in the description of his work:

"Spice your life with a drop of madness»

Reviewed at: Chapter I

by Erkzan Sunday, November 24, 2019 5:52:58 PM
After reading this book, there were quite strange feelings. In general, very funny. But the main character is actually not so funny. He understands that he most likely will not achieve his goal, but he is nevertheless moving forward with chaos and laughter. Go Oleg!
Report

Too beautiful for words

I would describe it as hell in a handbasket, but hell isn't crazy enough and the handbasket is screaming perverted history references. With both meanings of that sentance happening at the same time.

The description made it look like a cool, interesting book, so did the start - however the writting is all over the place, you struggle to follow the plot, if there is one - som chapters are a paragraph, some are longer. But overall dissatisfying - props for a nice idea tho.