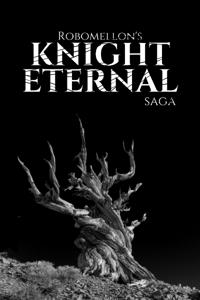 When violent freak storms scourge across the Earth, a giant rift transport millions of people into another world. They found themselves in Hammer Forge, a vast, untamed land filled with formidable sorceries and monsters, endless wars, and cutthroat intrigue. Trapped and broken, the surviving humans shockingly discover that none of the women were transported through the rift, forcing the men to drown on their grim purpose and their barren future.

But everything isn't what it seems.

The Knight Eternal tells a tale of a weary soldier, who once again carries the troubled winds of war; Of a healer chained in the most treacherous journeys for his people's future; Of three sons—three young boys undertaking the cruel test of fates that ushers the rise of a dynasty, who all come together to rule and conquer in blood and steel.

In the lands of magic and intrigue, the truth of their circumstance is malevolently more sinister than they can ever imagine.

Update Schedule: I try to post 3x a week, with at least 10,000 words total for that given week. Update days vary, but I will post them once the chapters are ready (Most likely in an MWF schedule PDT).

Getting there - 15 chapters in.

I haven't written a review in months and am failing to connect with my creative side, partially, because I don't want to come across as a cranky old man while writing this review.

Also, being early to a good novel is truly a sad thing.

So... I will focus on what is bugging me first -

1. Character- Somewhere in your synopsis you wrote "Jacob Ward and family...". 15 chapters/~200 pages in and it feels like he has the least POV chapters. Not that he does but it just feels like it because of how big or how  much more impactful the other 2 POVs are. It is the first time I have read anything like it. Kind of reminds me of one-punch man series where the story usually progresses through the POV of other characters but Saitama is either the idea that is ever present in the background or he eventually comes in and steals the spotlight. That is not the case with Jacob, if you were even trying to go down this route. All these POV shifts that you do almost every other chapter makes it so that I don't really connect with any character. I read different POVs with different mental voices. It is only while writing this I realised I have been using the same voice for all of your characters. I will be blaming that on you, sir.

2. Pacing is not really a issue. At the pace you have set I can see this becoming a long-term project and even better the power system whole break down 100 chapters in. Hopefully. But I will be honest, I did skip a few paras at some places because I found it dragging a little bit or because I was in a foul mood when it was a different POV every second/third chapter. -_-

3. Story/world - looking good. Lots of different creatures, a different way of being 'isekaied', can't really say anything on the class system becuase of how little and how late it has been introduced. I thought you confused fantasy with litRPG for the first 10 or so chapters. XD

4. Grammar - as always I won't make any comments on this other than I found it a smooth read.

Advice? - Give your characters more screen time! 3-5 chapters for MC followed by 1 side POV or if you plan on actually doing a multi-lead story then give them more than 2 chapters each.

My fear? - Jacob is 12! If he suddenly starts acting mature I am going to keep saying, "that's not what a 12 y/o would do!",everytime he does something but that's just me.

Didn't see a review here yet, so here we go!

Alright so for now, I'm not going to do an advanced review, I'll wait for maybe another five chapters, but as of chapter 15 I'd say this is amazing!

First of all, the buildup is slower but much more thorough because of that while not becoming draggy. The pace is excellent and we get plenty of information without infodumps.

The 'isekai' premise is twisted as one can see from the synopsis so that its fresh and the execution is done very well, where the character's conversations and the narration feel much more natural and less stilted or forced.

We get a healthy mix of action and fantasy with world-building and conflicts between characters are much better than just some confrontational idiot picking a fight.

I much appreciate the clean grammer of the author and the style which feels polished and quite fun to read.

Overall, if the synopsis isn't clear enough, it's about a whole section of city and the people in it (minus the females) being dropped into another world where soon, they get kickstarted into action.

I would definitely say to give this a go, and I'm sure you'll be hooked soon enough.

The review title summarizes my words, well written, and I like the characters. However, the story is a little too new to really give a conclusive review right now, and the pacing is a little slow though that's not an issue. It's only around 2 months old, so I'll check back in a month to see if the story progresses more.