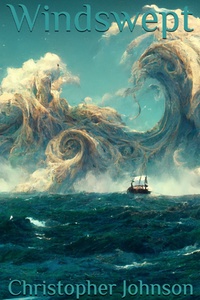 Remove Ads
Previous Chapter
Next Chapter
A note from SmokeyBear

Edited the last chapter so Theodore doesn't show up. It was a lazy attempt to explore a sub-plot I forgot about.

After getting away from the market and changing back into my fancy pants it wasn’t too hard to get directions to an apothecary. I pretended that a friend was sick with Sea Lion venom and needed an antidote. The wizened crone I asked pointed me towards a shop that had the cheap but wondrously effective ointments for her rheumatism.

The shop didn’t have a sign or a name. It was known by the locals as Angie’s shop and I identified it by its smell. The hovel reeked of bitter herbs and acrid smoke which cut cleanly through the baseline smell of human waste permeating most of the undercity. The thatched roof barely qualified as cover. Roofs down here were generally there for aesthetics. They never had to repel rain and so maintenance was pretty lax. As a result, dozens of little streams of smoke flowed from the patchy thatch-work in addition to the central column.

Opening the door caused the dried herbs hanging from it to rustle. Every surface was covered with the curing ingredients except for one shelf crammed with equipment and the small table where Angie sat. A formerly white cloth wrapped around her head kept her hair under control and acted as a filter over her mouth and nose. The rest of her clothes were simple but didn’t leave an inch of her skin exposed. She was grinding up some herbs in a long stone trench with a stone wheel-shaped pestle. I coughed as the pungent smell increased by an order of magnitude and ducked back outside to fill my lungs before entering again.

My double-take entrance had apparently annoyed Angie because she glared at me through the gap in her head-wrappings.

“What is it?” She snapped
“My friend is sick. He had a run-in with a sea lion. Do you have anything that could help?” I tried to keep it short to preserve my air supply.

“Mmhmm. Your friend is sick huh? Couldn’t you at least try to come up with a novel lie? There are people who actually need my medicine.”

“What makes you think I’m lying?”

“Please honey, when you’ve been working in this cesspit as long as I have you pick up a few things. Do you have any Idea how many people come here looking for addictive stimulants? Get out of my shop. I don’t want to fill it with poison to drive you away. It’s such a hassle to clean up.”

“I’m sorry I lied to you but it’s for a good cause. I’m not going to try and get high off of an antidote.”

“No, you’ll likely use the antidote to give you peace of mind while you poison others. I didn’t go into this business to spread death. Everyone thinks their cause is just, you’re not special, you’re just another murderer without the guts to face your enemies.”

That accusation hit me like a slap in the face. She had no idea what she was talking about.

“You have no idea who I am or what my goals are. I don’t want to kill anyone! I’m trying to save lives here. If you won’t help me, I'll just have to find someone who can pull their head out of their ass long enough to sell me some antidote!”

I turned and stomped the few steps to the door. For the first time, the rhythmic scraping paused.

“Hold on. You really don’t want to kill anyone?” She tapped her chin in thought.

“That’s new. Tell me, if you don’t have a poisoned friend, what are you going to use the antidote for?”

I was only torn for a moment. Angie was so sincere and forceful about keeping her work from hurting people that I felt I could trust her with anything.

“I want to save a good man from a short life of hard labor.”

“A freedom fighter!” She exclaimed clapping her hands together “How rare!”

She was louder than I would have liked but the reaction couldn’t have been more positive.

“That’s right. The Empire is going to work him to death unless I do something about it. I have some Sea Lion poison that might make the difference between success and failure but it would be stupid to use it without an antidote at hand.”

“Excellent! It’s about time someone shook up those bastards!” she exclaimed before turning to her shelf. She handed over three clay jars of antidote. When I asked how much it would cost she waved me off.

“Sea Lions are so rare there’s really no market for this stuff. I only keep it for emergencies. Helping a prospective hero keep from killing himself seems like a worthy cause to me.”

“Where are you from?” I blurted out. She was surprised by the personal question.

“I mean, you’re the first person I’ve met who seems to be actively trying to make other people's lives better. Is there a whole country of people like you out there?”

Angie looked down and didn’t answer right away.

“Oh my gosh, I’m so sorry,” I said, horrified at the immensity of my error.

“It’s okay,” she said but her eyes held a different meaning, one of complete loss. I tried to get the conversation back on less painful ground.

“Do you have any healing potions? I’ve only got a couple of silver on me but I’ll take as much as I can get."

“Thanks, I needed that.”

“So I take it healing potions aren’t a thing?”

“You're serious? Where are you from?”

“You wouldn’t believe me if I told you.”

Angie regarded me thoughtfully before heading back to her shelves. She handed a couple of clay jars and a roll of cloth back to me.

“This paste is good for preventing wounds from rotting. This one will help to stop bleeding. These bandages were treated with Gantree sap and will adhere to skin, just take care when removing them or you will reopen scabbed wounds.”

Angie might not have healing potions but she just handed over antiseptic and bandaids! She didn’t give me the supplies for free this time but the investment would be well worth it if I could keep even one person from bleeding out.

I thanked her profusely but was running out of breath and time so I took my leave. Duncan couldn’t have been happy about how close I cut it but he stayed uncharacteristically quiet. Once we were comfortably underway, I found out why.

“Hey, Patrick! How’s my favorite swabbie? What do you think? Isn’t sailing just the greatest? The freedom, the adventure, the wind on your face… What’s not to love?” He bellowed in a suspiciously friendly tone while draping an arm over my shoulders.

I raised an eyebrow. Was he trying to get me to act insubordinate so he had an excuse to dump me? Was he actually serious? I wished I had Angie's uncanny ability to see through lies.

“A good job? A good job he says!” he chuckled and shook his head.

“It’s the only good thing in a rotten world! Out here, it’s just us. A man and his crew against the elements. The only limits out here are a man's own strength, skill, and luck.”

That might be true for the captain, but who was he kidding. He tricked me onto his ship and threatened to throw me overboard on my first day. Wheres HR! I want to file a complaint on this megalomaniac!

“I can see your point,” I said “but you’re not going to convince me to sign on for another contract. I have goals that I can only accomplish on the mainland.”

“What can you do on land that you can’t do at sea?”

“Read.” I grunted. The salt and humidity had already gotten to my small book collection even though I kept them in my storage space most of the time.

“You can read nautical charts and the stars. There’s nothing in books that you can’t find out here on the waves! Look, you don’t have to give me an answer now, but I think there’s a partnership to be had here. I’m impressed with the improvements you’ve made. I’ve never seen anyone pick up sailing quite so fast. If that was all I wouldn’t be so insistent but you impressed me again with the way you handled the plantation masters. Just think about it and we’ll talk again when your contract ends.”

Duncan gave me a hearty pat on the back and headed back to his post at the wheel. I rolled my shoulders and popped my neck. Fat chance asshat. Even if I wasn’t going to abandon this contract, I’ve sailed enough for a few lifetimes.

I was definitely overloaded by this point even with my Light Mood ability halving the weight of everything I carried. I supposed it was a good thing that Duncan was taking it easy on me for now. If not, I might get chewed out for moving so slowly.

It was a relief when I could stop working to play my Song of Storms. I sat on my usual railing which groaned under my weight and began to play. I instantly noticed a difference from all the times I had played before. There was a sense that I was pouring myself into the violin and then the violin spread my awareness into the air. I could feel myself mingling with the wind, rushing to and fro with excited, wild motion. This new sense was confusing and vague however. I let my fingers do their thing and activated Weather Eye. I could now see the chaotic mess of wind fighting to rush in every direction. More than that, I found that I could shape it. I diverted one gust from colliding with and canceling out another, this resulted in a short-lived vortex. A few more attempts and I was able to sustain the vortex, feeding more gusts into it as it spun up into a more and more powerful wind. I eventually ended up with a doughnut of wind blowing past the sail then circling back to do it again. The sustained power caused the SeaCow to surge ahead faster than ever before.