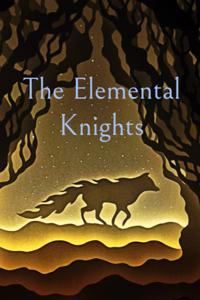 Have you ever had a book that you meant the absolute world to you? One you would read over and over again just because you loved it so much? What would you do if you suddenly had the opportunity to explore the world you loved so much? To be able to meet all of the characters you dreamed of somehow meeting. Would you take the leap? Even if you didn't know how you'd get home?

Well fortunately or unfortunately, Casey Bennett got that chance when he fell into the world of "The Queen's Riders". His entrance into his beloved book may not have been done willingly nor was it very smooth, but he is there nonetheless. His only clue to getting home lies at the end of the story. However, there's a catch, the story he knows so well and the story unfolding in front of him are slightly different. Given a power that had been hidden away for 500 years, Casey must find a way to limit these differences in order to bring about the ending written in his book. A task made even more difficult by the fact that his own presence is already bringing about changes.

With the help of the story's protagonists, he must navigate through this world that is both familiar and completely alien if he has any hope of going home.

A/N- This is my first novel so any and all feedback is greatly appreciated.

Reviewed at: Chapter 10: The First Mission

Although there are only ten chapters of this story out so far, I can confidentially say that it'll be an enjoyable ride.

There's a tongue-in-cheek humor used throughout the story which makes it good for a few nice chuckles. This paired with the descriptions of what the main character is going through and his experiences encourage the reader to keep on reading. A fun writing style. Probably beating around the bush here, but I personally love this kind of style.

Just a couple of punctuation errors and singular\plural subject-verb incongruency. Nothing that takes away from the story.

The threat of the main character's knowledge of how things should be versus how things are happening in this book world are intriguing, and the story's strongest point. It'll be fun to see how he grows into his new found abilities and role.

To summarize, a very fun Never Ending Story-esque story that I will be keeping an eye on.

Reviewed at: Chapter 8: One Answer and More Questions

This novel totally remainders me of the magicians, a man who travels to another world he read about. I also see tropes of Narnia in this novel. Which I love!

The grammar is okay, a few hits and misses here and there but the author does a lot of editing which means that a lot of hard work is put in.

The style is okay, meaning this story is well written but there wasn't anything gripping like some Mozart.

Now the MC is bland but this is a new story so not that much development going on but I hope to see more finesse from the MC later on since he read about this world.

Reviewed at: Chapter 10: The First Mission

As the title of the review says, Elemental Knights is an Isekai story. But this is not one of the many Isekai that most are familiar with. This is a classical Portal Fantasy like how they were back in the 90s and early 2000s. So, forget harems and video games stats, and think of Digimon, The Wizard of Oz, or A Connecticut Yankee in King Arthur's Court. With that being said, how does this story hold up?

The story was easy to read and for the most time easy to follow. The one time it was difficult was when Casey started to bond with his horse Mika. It seemed that the time frame was switching around, and keeping track of the chronological progression of his training started to get difficult. The other issue was that the narrative voice is too distant, which makes immersion difficult. It may sound cliche but instead of telling me the moon shines, I would rather see the reflection of the moon's glimmer on the knife's surface. The story would benefit from less telling and more showing, especially when it comes to the impressions of Casey. Less use of adjectives and adverbs in the text would help with that problem as well.

Lastly, exposition could be better implanted into the story.

All's well on that front. A few typos and mistakes here and there but nothing that would really distract from the story.

What makes the story unique and allows it to excel, is the fact that Casey has read the story of the book, his new world is set in. He knows how it will end and what else will happen in the future. But he has to be careful that his actions don't cause a ripple effect and change the future. Especially worrying and intriguing is that the number of elements that didn't appear in the story, pile up. As one wonders why the world is drifting from its set course, the future turns into an uncertainty. Even though the story had high-fantasy setting, there is the feeling of being Butterfly Effect-esque time travel story.

There is not much to say about the characters. As the story is still in its early stages, core personality traits of the main cast have just been established. Especially Casey is still bland and could benefit from greater exploration of his fears and his status as a stranger in an unfamiliar land.

All in all, it is a nice little story still in the beginning. Could the style be more atmospheric and immersive or the characters more fleshed out? Yes. But the story has the potential of turning into a meta-busting, genre-defying, and good web novel. As long as the author continues, I can see great things here.