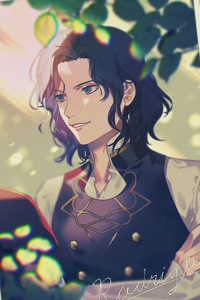 The deathly silence was all that filled my head.

With each passing second, my heart grew restless.

With each step I took, the unease grew and grew.

It was as if a ghastly hand had been placed on my shoulder.

Opening the door to their room, my eyes widened in horror.

Two hands grasping each others.

They were my parents arms.

At the other end of their arm, dust was slowly flying off.

What was I meant to feel at this moment?

Our power was cut. The power which powered the lights. It was cut.

I slipped in the centre of the bed, like I used to do.

A hot liquid flowed down my face as I was embraced by my father's arm, and my mother's.

They were alive, and they were embracing me.

Is it wrong that I have found my happiness?

An adorable voice was calling out towards Dimitri, as soft small hands shook his body. Dimitri, forced out of his nightmares, woke up to the sight of the beautiful clear blue morning sky, before swivelling his gaze towards Yuzhen's confused face.

Taking out a handkerchief, Yuzhen carefully wiped his tears away, as he curiously asked, "Why are you crying?"

Dimitri's eyes widened open, as he quickly tried avoiding his gaze, but such a tactic was useless against Yuzhen, he had already seen the tears.

Forcibly locking his eyes onto Dimitri's, Yuzhen's gaze softened as he continued, "Mother always told me that if I feel like crying, I can always cry with her. Do you want to cry with me?"

In Dimitri's eyes, Yuzhen caused his whole world to become bright once again, as his heartbeat quickened. His soft gaze, his empathetic comforting words, his gentle actions. It all caused his heart to feel warmth, as if he were gently caressing it. The tears simply wouldn't stop flowing down his cheeks no matter how hard he tried steeling his heart. Such a feeling of vulnerability, Dimitri hated it, the feeling of weakness, yet, the longer their gaze locked with each other, the more his walled up heart softened.

Slapping away Yuzhen's hand which was wiping his tears, Dimitri avoided his gaze as he hoarsely demanded, "Stop touching me."

For six years, Dimitri chose a solitary life. That was until this curious child was able to slip his way into his heart, with a simple smile and a flower. But the flower within his hands weren't what he wanted, but the eternally unique and interesting flower gazing at him right now.

But he had slapped Yuzhen's outreached hand away. He felt guilty for accepting the love and care of another, it felt as if he was replacing his past with new memories. It eroded at his consciousness. Dimitri did not know what he should do, but one thing is for certain, he had to apologise profusely and sincerely.

Yet just as he was about to hurriedly apologise, Yuzhen had suddenly embraced him as he nuzzled his cheeks against Dimitri's chest, before consoling him, "Mother always said, when someone in pain slaps your hand away, it is not because they hate you, but because they are going through an emotional time. Did someone hurt you Dimitri?" before grinning mischievously as he continued, "Did someone bully you in the past? I'll make mudballs and throw it at them!"

Yuzhen's words caused Dimitri's tense expression to relax once more as he let out a rare chuckle, "They wouldn't dare to try anything in front of my face."

Dimitri smiled weakly at the thought of reaching Valentine's power, yet he still solemnly answered, "No, but, I will surpass him."

"For what?" Yuzhen further questioned, as his curiosity of his interesting brother deepened.

Dimitri's expression sharpened slightly, as he gazed deeply into Yuzhen's eyes, "To protect my loved ones."

Yuzhen felt confused at is answer, as he asked, "Protection from what?"

Dimitri's expression froze for a split second before hurriedly answering, "Just in case, you need protection."

Yuzhen returned to his sitting position as he pondered over something.

"What are you thinking about?" Dimitri asked, he could not help but become slightly anxious with each passing minute, he feared Yuzhen would continue questioning him, but luckily for Dimitri, his fears did not come to life.

Tilting his head to the side slightly, Yuzhen put his index finger on his lower-lip as he pondered for a few moments. Just as he was about to open his mouth to answer the question, Yuzhen suddenly quickly cloaked himself and Dimitri under the blankets, as he quickly had Dimitri lay flat like himself, as he sneakily gazed out of a small hole, at the door.

Yuzhen glanced at Dimitri as he put his finger to his mouth.

It did not take long for Dimitri to find out what Yuzhen was hiding for, as the bedroom door was suddenly opened.

A jovial Valentine had excitedly entered the room and was about to say something, until he noticed a single thing, Yuzhen was no where to be found. The instant he turned his back to search the bathroom, Yuzhen had pounced in for an attack as jumped down planning on grasping onto Valentine's back like a koala hugging a tree, yet what came was not what he had expected.

With a smirk on his face, Valentine turned his body in order to catch Yuzhen in his arms, as he began spinning, while laughing haughtily, "You are a hundred years too young to ever catch me off guard!" Until he stopped after a few minutes, seeing that Yuzhen was happily satisfied with the results of his jump.

Yuzhen snuggled against his father's chest, as he curiously asked, "Did father need something?"

Valentine grinned as he answered, "It's a surprise, why don't you try guessing?"

Yuzhen thought for a moment before asking, "Are we going to roll down the mountain together again?"

Valentine could not help but chuckle at his dear son's words, before correcting him, "No, even better!"

Yuzhen's eyes sparkled as he excitedly asked, "Is grandpa Vii going to be visiting us again?!"

A prideful smirk appeared on Valentine's expression as he shook his head once more. He could not help but look forward to the week.

Yuzhen who was gazing innocently at his father's joyous expression, could not help but feel the same joy his father felt, as he grinned along, "Are we... Ah... What are we doing father?"

Valentine could not help but feel as if he had made a grand achievement as he haughtily explained, "I, your father, has got a week-long holiday in Utopia, meaning..." His grin deepened as he felt proud of the ever increasing sparkling of his son's deep-azure iris'

"I-I... I'm finally going to explore the most majestic fortress-city?!" Yuzhen could not help but jump up in excitement, his heart-beat quickening as he quickly ran to the backpack beside the bottom of his bed, before taking certain things out, while packing new things in. Such as a book.

Valentine felt slightly confused at his description of Utopia, "What makes you think that Utopia is a fortress-city? All it has is massive walls and a lot of empty space."

Yuzhen grinned at his father's rare hint of vulnerability as he edged onto him, "But father! Those are not just any massive walls, but massive walls infused with magic! Why is that father? Will this fortress-like city... Transform?!"

Valentine scoffed at Yuzhen's excited expression, as if he were currently imagining those massive walls transforming into who knows what.

Yet, such an answer only caused Yuzhen to suddenly lock his eyes with his fathers own, as the mischievous grin on his face slowly turned into a mischievous smirk, "I know you're lying."

Valentine could not help but cough on air, he did tell a lie, well, a white lie.

A slight smile appeared on Valentine's face as he jested, "Ah! My child is such a genius that he even knows the walls were infused with magic. I guess he knows so much about Utopia that he doesn't care anymore to sightsee. What a pity - a true pity."

Yuzhen's eyes instantly went wide in panic, as he quickly shook his head, "No! I want to go! I haven't seen the walls up close... I al-" Yuzhen's eyes slowly turned watery as he looked up at his father with a miserable expression on his face, his happy countenance slowly breaking apart.

Valentine felt as if his heart was bleeding. Looking down at this son's watery eyes, he quickly back-pedalled from his previous words, "No, no and no! Of course you're going to see Utopia Yuzhen, just promise me one thing okay?"

In a flash, Yuzhen's miserable expression disappeared like it was never there to begin as a bright grin soon replaced it, "Promises again? What sort of promise father?"

Valentine felt slightly fearful at his son's ability to act, he was on par with his mother's talent, yet it was a positive that he wasn't actually sad.

Gently caressing Yuzhen's deep-azure coloured hair, Valentine gently whispered into his ear, "If you suddenly can't see, or hear, just stay calm and still, your mother will be with you."

Yuzhen pondered over the promise, he did not understand what his father meant, but that did not matter, if it meant he can visit Utopia for a week, then he will bite on it. He simply has been cooped up in this area for too long. He wants to be like the birds he watches migrating in the sky, to a new home, with all their family. Yuzhen wants to explore the world and see the beautiful flowers and animals he reads about with his own eyes.

"But father! Those are not just any massive walls, but massive walls infused with magic! Why is that father? Will this fortress-like city... Transform?!"

Valentine pensively thought over his son's words, as his eyes sparkled, "It's a DECEPTICON!"