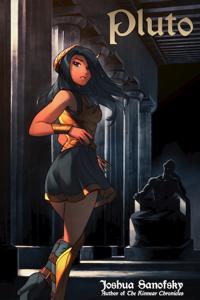 Well written story, definitely worth the read if you like Greek mythology.The author managed to work other mythologies in on the periphery of the story as well. I would recommend it to anyone interested in this type of story, even with some of my critical statements below. I thoroughly enjoyed it and suspect most will.

A little lite characterization wise, and a little light on story. The characters were likable and behaved consistently with how they were portrayed, but there was little character development - for the most parts the characters changed little throughout. To be fair, though, many of them are gods of demi-gods, and so are hundreds to thousands of years, so you'd expect their personalities to be pretty stagnant. The story was coherent and well written, but was a little thin. While there was an overarching plot, it was secondary to this just being about a period of time in Pluto's life.

I'd characterize it as a late young adult story, if that makes sense. There's relationships (though lightly covered for the most) and death (though, mostly consequence free death for the plot characters). IMO the author could write commercial YA stories without too much in the way of problems, though they would need to up their game for adult targetted stories.

Gives Riordan vibes, but stands out on its own

This story is everything Percy Jackson's series/Heroes of Olympus was and even more. While Riordan focused more on an adventure of a broader world out there, here though the limit of world-building is a bit confined, its delivery of action and the gods-demigods dynamic and their affairs more than outweighs it.

This story atypical to the myth has its own take on how the gods really are and I find it truly fascinating.

The main characters are fleshed out a lot and the story truly shines through by showing us the developing trust and understanding between our main protagonist and Hades.

The romance could've been handled better in the developing stages, but no matter didn't change the dynamic between the couple once they started going out, which I very much appreciate.

I'd really love it if MagusJosh could come up with a sequel to this story happening from a few years from the ending with all our favorite characters once again back at the action. I will hope for that to happen.

The interpersonal relationships really are the highlight of this story.

But story potential was discarded right off the bat to "get to the part that the writer finds interesting".

The 5 year time skip to deal with a millenia of paperwork (worldbuilding), seeing relationships form with other members of the underworld. Pluto coming into her own as an avatar and maybe discovering more of the impersonal and cold Hades during the first 5 years, which would have been amazing as the MC misinterpreting it as coldness, was actually Hades being considerate and warming up to her.

Because I read the "Reader" Korean novel, I'm also partial to the relationship between Persephone and Hades so I'm REALLY hoping to find out what happened to her.

Next point of criticism would be THE UNENDING THIRST of our main cast. I'm seriously mad about that point. I mean, yeah, a Greek God would actually be like that, but  starting Book 2 introduction with a Cyclops hunt and MC admiring the romantic interest's peach bottom...

Just rubs me the wrong way.

Made my view of other characters to warp. Is Mel a self insert, etc.

Again, if Mel and MC had time instead of befriending on day 3? Maybe a bit of rejection? The Muse of Nightmares and all that. Midnight pranks? So far, it'd seem that she wasn't a thousand year recluse.

Again, weakness of the time skip.

Otherwise, a respectable story. Great drama. But they'll need to bring an axe to this story one day and slaughter their cub if they want to paper publish this.

There is a great story here, just beneath the surface and it would not be a hard effort to round up the corners, hollow out some parts and expand on others.

But everyone's a critic :p that's just how I'd do it.

Not really unique but an interesting read anyway

Make no mistake, this is a Young Adult novel with all the teen romance that implies. Unlike most of the genre it starts with the protagonist already aware of the supernatural world rather than being thrust into it unexpectedly. With engaging characters, well written worldbuilding, and a unique take on greco-roman mythology the only things holding it back are the plot twists so obvious it's hard to believe the protagonist took so long to figure them out.

I like the confident writing voice, the good pacing, and the richly imagined (and updated!) mythological world. The author has a clear love for mythology and has done his research. I loved the little touches, like that unopened large jar that keeps hinting at being Pandora's Box. The female characters have fascinating conversations and I'm drawn into their struggles. There's a good deal of promising setup. I'm intrigued, and looking forward to reading more!

Action, cute romance and a mystery; a pleasant urban fanatsy

A nice urban fantasy where fantasy means a contemporary take on the ancient greek mythos. The characters, action, romance and plot are all sufficent. The mystery forms the overarching backbone of the narrative and is interesting enough if the reader is invested in the characters.

It is its own 'original' story with its own set of characters with the the greek gods quite distinct from their ancient telling or other authors takes on them. For the better (as the reader gets a new story and characters) for the worse (no Diomedes who faced down Aphrodite and Apollo then teaming up with Athena to face Hecktor and Ares in the Illiad for instance).

The plot hits all the right beats for your standard novel. The pacing suffers when read in chapterly releases that is typical of web ficition. On one had this allows for a satisfying conclusion at the end of 'book one' one the other it mean relatively long wait times to find out what happens nexts in the story.

A rather safe plot with a happy ending. Safe in that death is not real signifcant threat as the main is buddy-buddy with the god of the underworld. Saving her friend and keeping him in her life early on in the story. Pleasant to read if your stressed etc but unfortunately tension is key to emotion impact. With weakened stakes comes less drama stakes. The cuteness of the romance balances with the mystery and the action for a good story if read as a book.

The setting is perhaps the weakest writing area. The detailing is good enough and on location descritpion are sufficent. But with the exceptation of perhaps the underworld there is not much world-building. I am not entirely sure of the purpose the greek gods fulill in the world. I guess like most urban fantasy they deal with problems of the world itself seperate from humanity but loosely tied to them. Only the fact that humans go to the afterlife after death is the only direct signifcant joining of two other distinct worlds. It is understandble why humanity remains ignorant but what do the gods do with all their immortal time that makes them signficant to humanity?

The action scences are engaging but neither grisly, absurd, nor are the stakes really ever set high for them to be particualry memorable. The choice allow the author to focus on fun character interactions and yes fun fight scenes with monsters and more.

Grammar is overall sufficent, I noticed one minor mistake (which I have forgotten about). The writing style generally follows ccontemporarytrends of focusing on detailing character and plot (and 'safe' action as well), which makes an easily digestible reading experience.

In conclusion, I had an enjoyable time reading Pluto. Once book 2 is finished I plan to give it a read as well.

Really enjoyable story that has me hooked. Has the feel of Percy Jackson for grown ups. Lots of mythology references, including some less well known characters. Interesting story, realistic characterization, well written, with nice long chapters.

From reading this, I was getting the feeling of other's authors work on this subject. Gods showing off their newer colours, how they have changed over time, and how they can change because of the people around the. Neat stuff

Style isn't too exceptional. Very showy. Helps with fight scenes but not to an extent where I call it perfect. Grammar is good enough.

One of the bests stories ive read in a while, excellent writing, amazing characters and a satisfying ending. It was a pleasure to read and it fully deserves 5 stars. If anyone is on the fence about reading it I'd thoroughly reccomend giving it a shot. Now I'm off to shift through the authors other works to look for more hiddem gems.

A thoroughly entertaining read. New and different take on several older mythological tales including multiple religions in a beautifully blended story with a pov from an Avatar MC. Tidy mini stories, built into one lovely long to read tale. Includes a quiet same-sex romance,with little to no difficult to read passages.