When Victor regained consciousness, it was with a mouth full of sand, and his armor drenched in saltwater.

His entire body was in pain, his nerves scrambled by the dragonslaying lightning. His head hurt, and his ears struggled to distinguish sound from his newfound tinnitus.

That fomor did not mess around.

What about Vainqueur? His own [Darwinist] perk had protected him from the [Dragonslayer] additional damage, but the dragon must have suffered it head-on. If the sheer power had brought Victor so low - and would have one-shot him without [Final Problem] - he dared not imagine what the dragon endured.

From whatever signals he received from his body, he was face-down on the sand, battered by waves and rain; his scythe within reach of his hand, but his legs buried. He had to rise up, find his friend...

“Is he dead?” a female voice asked.

They were here. Right next to him.

Victor laid still, not giving any hint of survival away.


“I think so,” another woman replied, her voice cold and vaguely Swedish-sounding.

“Is the corpse still warm?”

“Why? His Majesty Wotan said no desecration of the dead.”

“But with our hours, we never had fun!”


“Enough prattle, my Valkyries.” The thunderous voice of King Wotan boomed from above, the very air crackling with lightning. The fomor clearly brimmed with impatience. “Have you found Knightsbane’s corpse?”

“No, Your Majesty!” Victor managed to move his head just enough to get a glimpse of the attackers. As he expected, two armored Valkyries stood right next to him, spears ready to impale him at any time. His vision was too blurry, even for [Monster Insight] to activate.

“The current must have carried him north, into the high sea,” the fomor, Wotan, mused from above. “Valkyries, gather! Until I have the dragon’s skull tied to my horse, the hunt goes on!”

The two women muttered something about overworking under their breath, before blowing sand into Victor’s helmet with their wings. He heard them fly away, the sound of thunderbolts, the winds, and lightning flashes growing weaker.

Victor waited a long while until the thunder had become a distant sound, and his regeneration patched him up enough to move his legs out of the sand.


The Vizier rose up and observed his surroundings.

From the look of it, he had ended up on a sand and rock island, barely capable of sustaining a few palm trees before the storm turned them into firesticks. A faint rain kept drenching him, washing away the sand from his armor.

Hundreds of electrified fish laid on the sand, the victims of Wotan’s [Ragnarok]; and unfortunately, Victor noticed a few members of the dwarf crew among them. Unlike him, they weren’t faking death.

Thankfully, he also noticed his [Black Grail] left on the shore, so he could maybe raise them, but damn... the remnants of a wing of the Piggybank laid as a testament of the attack’s overwhelming savagery.

Very far into the horizon, Victor could see violent thunderclouds move towards the high sea. The storm followed this [King Wotan] everywhere he went, as he relentlessly searched for Vainqueur. They had moved far away, but Victor had no guarantee they wouldn’t return.

He had to find Vainqueur, and quickly.

Where was he anyway? The fomor believed the current had dragged him away, but [Master’s Shield] needed close proximity to activate. Victor immediately guessed what happened, and cast a spell on the shore. “[Naglfar]!”

Hundreds of pallid, corpselike hands, appeared on the beach and began to excavate the sand. Over a few minutes, the tip of Vainqueur’s horn began to appear, the dragon buried right under the fomor’s nose.

“Charlene! We have been attacked!” Victor attempted to contact her through the [Whispering Skull] but received no tonality. “[Scarlet Study].”


What kind of Field?


… aka the Bermuda Triangle.

Great. Just great! At least he knew he was north of the Dagger Coast, but if the legends about that location were a reality in Outremonde… Come to think of it, Wotan must have ambushed them here on purpose, in a place where they could not contact their allies.

He and Vainqueur could always fly back south, escaping the triangle, and rejoining civilization to bring back reinforcements. He needed to gather whatever supplies had survived the crash, free the dragon, raise the dead if possible, and get out of here before the fomor returned for a second round.

There was something else on the plane… something dear to him.

“No!” Victor panicked, flying above the island in search for her, only to come back empty-handed. “No, no, no! Marinette!”

She had been on board when Wotan brought down the plane! These bastards drowned his bazooka! His loyal weapon, with which he had threatened dozens, killed vampires, and partied with so much!

“Murderers!” Victor collapsed on the beach, hitting the sand with his hand. “She was too young! Too young!”

The vizier cursed, his eyes looking at the endless, merciless ocean, where his beloved weapon would rest forever. A burial at sea.

That fomor… the system never registered fomors by their names before, probably because they lacked a soul. Why did this ‘King Wotan’ appear in his screens and notifications then? Maybe because it wasn’t a true fomor, but another creature pretending otherwise? How could he be powerful enough to demolish Vainqueur with a single attack, even if it was optimized to damage dragons?

Unless… Could it be…


A shiver ran down the Vizier’s spine, as a terrifying possibility formed in his mind. A very outlandish one, and one he couldn’t confirm unless he analyzed Wotan with [Monster Insight]. But if it was correct, then Murmurin’s troubles had only just started.

A new event interrupted his trail of thoughts. Victor slowly squinted, as he noticed a shape on the sea. He briefly worried about a Valkyrie, before realizing otherwise.

A large ship, getting closer! And its crew had even sent a small boat, manned by two people, to rescue Victor. They must have seen the smoke from the burning palm trees, mistaken it for a distress call.

The Vizier briefly canceled his [Naglfar] not to disturb the newcomers, Vainqueur excavated enough to look like a whale buried in the sands. In his experience, it was better to gradually introduce new people to the dragon way of thinking, instead of overwhelming them with worrying information. Still, he grabbed his scythe, just in case his saviors weren’t friendly.

The small boat soon reached the beach, allowing Victor to see its passengers. The first was a birdkin, a humanoid parrot with flamboyant emerald feathers and a rounded hat, and the second a one-eyed orc. Both carried sabers and muskets around their belts.

“Well, well, well, look at that mess,” the parrotkin said, as he climbed down from the boat, followed by his orcish companion. His eyes set on the remains of the Piggybank’s wing. “What kind of shipwreck is that?”

“Greetings,” Victor welcomed them, as they noticed him. “How good to see friendly faces. I’m Victor, Victor Dalton.”

“Hello, I am Jean-Micheng Robbery,” the parrot beastkin playfully nodded at him. “And this is my first mate Maurice Ransom. Always glad to rescue survivors. If you can come with us, so we can introduce you to Mr. Giveusallyourstuff?”

“That would be very kind of—” Victor stopped, understanding the not so subtle message. “Oh, wait, I get it.”

“Good,” the orc scavenger added. “Very good. Give me your underwear too.”

“He collects them,” his fellow raider added. “You don’t want to learn why.”

“Well, unfortunately, I have a date with Miss Screwyou on that island, so I must decline.”

“Oh, look at that,” the birdkin said with an even more sarcastic tone than before. “Another member of the Ain’t-you-a-dead-smartass family. This is so cute.”

“Guess we’ll have to introduce him to my cousin Sarah Slavery soon,” the orc added. “She’s very mean, and she never lets go.”

“But she pays well, especially for half-fiends bastards like you buddy. She’ll probably cut off your tail too; I heard devil tails make for good aphrodisiacs.”

Victor sighed at these stupid crooks. “Guys, I am a winged half-dragon wearing armor made from loan sharks’ souls and wielding a scythe with an [Insta-death] feature. I have sand in my boots, and I’m pissed. So for your sake: Go. Away.”

“Ain’t that terrible,” both drew muskets and aimed at Victor's head. “You have a scythe, we have guns.”

The two exchanged glances. “I don’t understand that metaphor, either,” the orc admitted to his companion.


“You will,” Victor said, as the shore around them moved on its own.

The two would-be pirates took a few steps back, as Vainqueur’s neck fully emerged from the beach, his body dusty with sand. They immediately shot at him with their muskets, the bullets bouncing off his scales.

“Minion… what is all the racket?” Vainqueur complained, clearly struggling to wake up. He hadn’t even registered the attack.

“Angry locals, apparently,” Victor deadpanned, pointing his scythe at the pirates. “They proposed to carry us on their boat to the mainland.”

“Ah, new minions.” The dragon narrowed his head at the two crooks. The orc fell on his lap, having wet himself, while the birdkin was too terrified to fly away. “And you start your new lifelong employment by threatening my chief of staff, from what I heard. Do you have coins on yourselves?”

“Give them to me. Give me all your money.”

The two would-be robbers exchanged an astonished glance, then reluctantly grabbed purses around their belts and threw them in the sand. Victor would have almost felt sorry for those two if they hadn’t tried to pull a fast one on him first. Call it karma.

“Nothing like the feeling of my hoard growing bigger in the morning,” Vainqueur said before glancing at the big boat nearby. “Is that your ship over there?”

“Give it to me too. I demand to be spoiled.” The dragon shook himself to get rid of the sand on his scales. “You see, Manling Victor, this is how you talk to uneducated strangers. You kindly ask them to give you all their possessions, in return for extending their short lives a little longer.”

“And you sweeten the deal by bringing them civilization afterward?” Victor replied with heavy sarcasm.

“Of course not. Giving back is a minion’s job. A dragon only receives from the universe.” The dragon scratched sand off his horn. “Friend Victor, why does my head feel naked?”

The Vizier glanced up at his master’s head and winced upon noticing the broken remnant of a crown lodged between the horns.

“Minion? What is wrong?”

They all had lost something dear to them today.

A note from Void Herald

In the current war for the top five of best-rated, Vainqueur is currently 5th, which awakened my competitive spirit.

Remember, you, my dear readers, are the only force keeping this beautiful dragon on RR's front page. Only you. 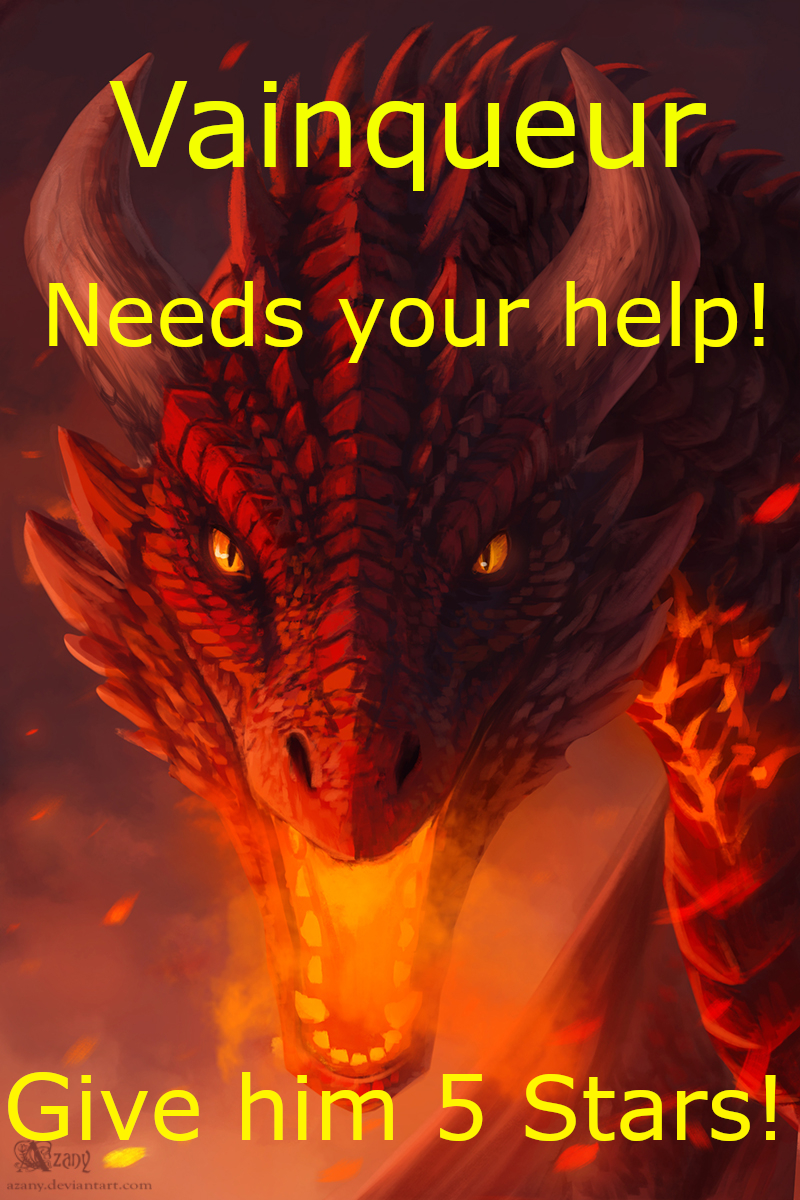 Bio: I'm Maxime Julien Durand ([email protected]), a European warlock living in the distant realm known as France, spending half my time writing and the other half managing magical websites.