20x: Minions of the Month

Victor walked out of the Castle of Murmurin—or rather, the ruins left standing—with his throat still sore from the shouting, and only one thought in mind.

That and Vainqueur was steadily getting smarter. He had noticed Victor had sacrificed his items, and even if the adventurer could deflect his attention, he needed to replace them as soon as possible.

The notification of his new level gains did alleviate his fears.

Holy hell, those growths… he had lucked out today. At this rate, he would catch up to the Shining Knight in no time flat.

What, there were level ceilings? He needed to bribe the system to get into the middle class? Damn, it was just like on Earth.

For once, though, the system gave him more explanation.

Valhalla. The final challenge. Only twelve creatures survived it and walked out as the deities of Outremonde.

Still, he had no idea where to find a [Crest], or even what it looked like. Questions for later. There was something more urgent than levels or preparing for that Bragging Day.

“Furibon,” Victor spoke up at his scythe, the ghastly face of the lich materializing on the blade’s edge. “Furibon, are you there? Furibon! Furi?”

“What?” the lich whispered back with an irritated tone.

He could indeed understand him. “What is that deal with the iPad?” The lich’s silence made him roll his eyes. “The Apple of Knowledge.”

“Why would I tell you? I hate you, and everything that dragon stands for. I wish you all die.”

“Thank you, you are so kind. Now as for why…” Victor gave the lich a sly, cruel smirk. “Because otherwise, I am giving up that scythe to Vainqueur, and you will spend eternity as part of his hoard. You will have to support his insanity until the end of times, watching him shower in gold in your castle’s vaults, and sprout nonsense until you go mad.”

“Humanoid/Dragon type,” Victor confirmed. “Now tell me, before I go through with it. You know I will.”

Furibon let out an angry sigh but hated Vainqueur too much to refuse. “My Master, Brandon Maure, to use your crass language… backed the wrong horse. He assisted the fomors led by King Balaur in their war with Gardemagne, so he could seize southern territories, but his side lost. Now, with the fairy lords defeated, Gardemagne has many adventurers and crusaders, and no enemy to fight.”

“So he’s afraid Gardemagne will attack him next.”

“Prydain and the Dark Forest, the strongholds of the remaining fomors, are too dangerous for Gardemagne to threaten, but not Ishfania. With his losses during the conflict, my master no longer has the forces to face the full might of his neighbors.”

“Okay, so he’s desperate to find a way to turn the tide and save his remaining territories.” Using the Scorchers to distract adventurers, trying to summon reinforcements from Hell... “Let me guess, he thinks weapons from other worlds will solve his problem?”

“We always researched the technology from the world of Earth, whenever we could find it. In many ways, it completes our own magic. King Maure offered great rewards to Claimed willing to share knowledge with him, and one day that dark woman brought him one carrying the Apple of Knowledge.”

That tale sounded very familiar. “Is that woman’s name Lavere?”

“No. That woman’s name is Melodieuse. She is poison in human form, a beautiful, deadly flower who kills on touch.”

Ah. Too bad. Victor guessed not all conspiracies were connected. “So, that Claimed, who probably worked for the biggest weapon manufacturer of my world, offered his services to Brandon Maure in exchange for power and money. He basically just changed employers. Then, how did his digital notebook end up in Haudemer?”

“Digital?” The lich shrugged. “The Claimed grew what you would call a conscience, and which I call weakness. The coward fled to Gardemagne, taking the Apple with him, and when Maure's human agents killed him around Haudemer, they found monsters had already stolen the device.”

Blessed be the Kobold Rangers.

“I could not unlock the magical passwords protecting the forbidden knowledge, but King Maure has powerful allies, including Claimed of his own. In time, the knowledge will be his, and you, no, all of Outremonde, will learn fear and fire.”

Yes, yes. As far as threats went, Victor had heard better. The possibility of a demonic dictator gaining access to plane schematics was worrying though; Maure may not fully replicate the original designs without the necessary infrastructure, but Victor himself had created a poor man’s aircraft. It could be done.

He would have to warn Gardemagne or convince Vainqueur to somehow deal with Maure before he could threaten the continent. “And the woman? What does she want? Where does she come from?”

“I do not know, I do not care. I serve my master as you do yours, I do not ask questions.”

There were so many wrong things in that sentence, but the lich didn’t seem to lie. Or if he did, Victor had no way to check. The squire suspected another power supported Maure from the shadows to strike at Gardemagne, but for now, he could only guess whom.

Oh well. He would send warning alongside the “imperial declarations.”

The Kobolds Rangers exited the building behind him, drawing him out of his thoughts. Blue carried a sword that Victor immediately recognized.

“Did the sword talk?” Blue asked, examining it more closely.

“A mimic?” Red examined it, noticing lips on the pommel. “Why didn’t it bite you?”

As he observed the minions, Victor felt an instinct stirring inside him. He couldn’t put his finger on why, but he had the intuition his [Mook Promotion] Perk could work on both the mimic and Red. Not on the other kobolds though; either their evolved form was stronger than him, or more likely, Red had earned more combat experience as the group’s leader and thus fulfilled hidden conditions.

“Red, come here for a second, I want to try something,” Victor ordered. “Blue, give me Junior.”

He patted the dutiful Red on the head and took Junior from Blue’s hand. The second he touched the two creatures, the Perk activated. Both of them were swallowed by a bright light and transformed as Victor watched.

Red grew into a bipedal, humanoid saurian who almost reached Victor’s own height. His features changed into a cross between a raptor-like dinosaur and a kobold, with retractable blades attached to his arms. A red scarf appeared out of nowhere around his neck, and on a closer look, Victor realized it was part of the body. The way it stood, Red reminded him clearly of a reptilian version of the sentai heroes he had taken inspiration from.

“Style?” Red was almost brought to tears, as he admired his new features, especially the blades. “I have style, and I am grown!”

Never before had Victor seen a more disturbing horror. The mere sight caused the kobolds to ignore Red’s transformation and instead cower behind Victor.

He had to drop the sword before it could finish the metamorphosis, as it grew considerably. The misshapen entity in front of him was the size of a horse, with a main, spherical body carried by six, handed legs. The skin’s texture reminded Victor of stone, and could easily camouflage as it.

The monster had a mouth big enough to swallow a man whole, sharp teeth, and a sickeningly long tongue. Finally, a beautiful, clearly magical sword sprung from the main body, like a fish’s lure.

By burying itself in the ground, the creature could easily look like a sword in the stone, an Excalibur tempting the foolish. This creature was the next evolutionary step towards the complete decimation of adventurers.

At least they would help keep the peace. Now, first order of business, buy new bracers and necklace to replace those he lost in Haudemer. He already felt bad lying to Vainqueur about them, and—

He was feeling bad about lying to the dragon? Not actually fearing for his life for purely pragmatic reasons, but feeling ashamed of it?

Come to think of it, even if Vainqueur had made it clear he would never let Victor out of his service, the adventurer wondered if it was truly such a bad thing. He had become the region’s regent in all but name, gained many levels, made friends, albeit difficult ones, and gained a powerful protector. Vainqueur did save him from Furibon after all, even if he would have picked a fight with the lich anyway.

"I think I have Stockholm Syndrome."

A note from Void Herald 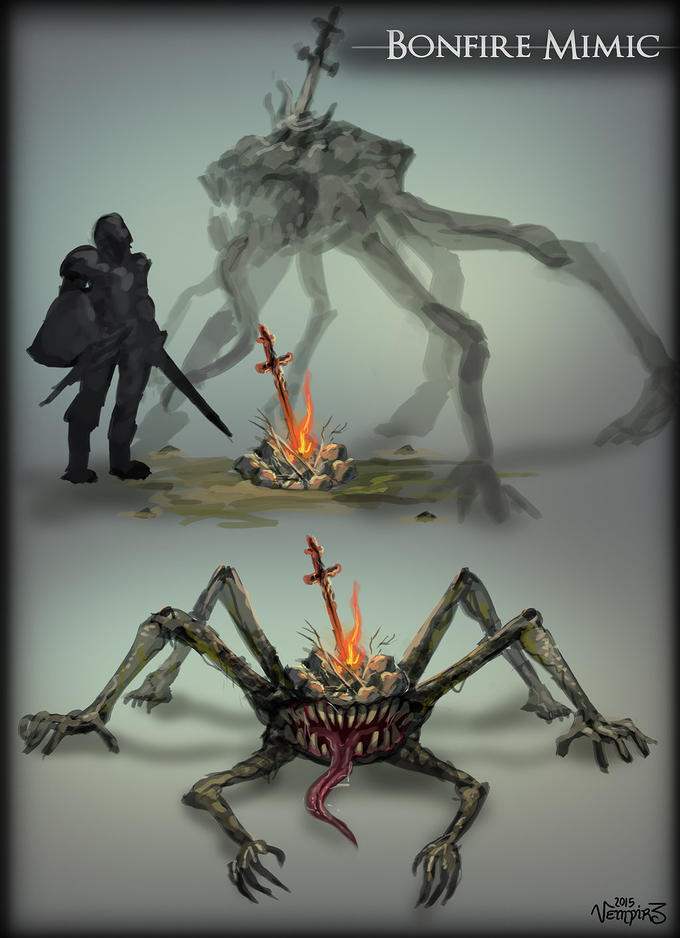 Bio: I'm a European warlock living in the distant realm known as France, spending half my time writing and the other half managing magical websites.