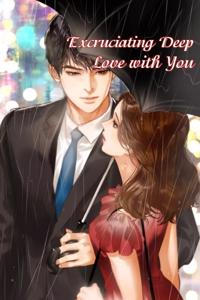 Excruciating Deep Love with You

I laughed loudly, especially when I saw her frightened eyes. The pleasure of revenge was even stronger.

But the next moment I was brutally knocked away by someone. My whole person fell to the ground, and the voice of Qin Mochen caring about Mo Yulin came into my ears.

The anticipated pain did not come. Instead, I was held tightly by a pair of powerful arms. It was Su Chengzhao who had saved me again.

Su Chengzhao took me to the bed and looked at Qin Mochen with a cold face. Suddenly, he grabbed Qin Mochen's collar and shouted, "If you dare to bug Yufei for this cheap woman again, I will show you some!"

Qin Mochen looked back coldly at Su Chengzhao who was also angry. He sneered at Su Chengzhao broke away his hand with his own, and said full of contempt. "Even if I kill Mo Yufei, it has nothing to do with you!"

That sentence shocked me. My heart, already torn to shreds was trampled hard once again.

I saw Qin Mochen throw a mocking face at me and drop a cold sentence, "The day after tomorrow, at my wedding, you'd better not come. You make me nauseous, so don't ruin my mood!"

He left the ward with Mo Yulin in his arms.

Tears had already dried up. I, like a soulless body, lay there and could not move an inch.

Su Chengzhao picked me up and stretched out his hand to wipe away the tears on my face. "Yufei, everything will pass. It will be yours after all."

Would be mine after all?

Where are the things that belong to me?

They were trampled by Qin Mochen and killed by Mo Yulin. What else can I lose?

Su Chengzhao took me out of hospital and brought me to his home. I locked myself in the room for a day and thought a lot.

From the first time I met Qin Mochen five years ago to all kinds of things that happened in five years, everything was so ridiculous.

Why should I bear all that?

Why should I lose everything?

The pathetic love in my heart had already disappeared. I looked at myself in the mirror, pale and lifeless.

It's far from the famous Miss Mo of five years ago.

If I hadn't met Qin Mochen from the beginning, maybe I would still be the famous Miss of Mo family, and we would be two unrelated people in two different worlds.

But after all, there was no if!

I locked myself in the room for two days, and I thought more about it.

Qin Mochen forbade me to attend the wedding because I made him sick. I had to show up at the wedding. For him, I only had hate now.

The more he didn't want to do something, the more I would like to do it. From now on, Qin Mochen and Mo Yulin are enemies forever!

"Yufei, if you want something, just call me. I'll be back in a minute." Su Chengzhao's voice was ringing outside, and I just respond with a hum.

Hearing the door closed, I changed my clothes, dressed myself carefully, looked at myself in the mirror, and raised my lips coldly.

Starting from today, I will take everything back step by step!

I went to the wedding site and saw the wedding photos of Qin Mochen and Mo Yulin hanging in the hall. My heart ached hardly.

Suddenly, my mobile phone rang. It was Su Chengzhao. I hesitated to answer it for a moment. Su Chengzhao's anxious voice came over. "Where are you, Yufei?"

I smacked my lips and said nothing. Maybe even if I didn’t say it, he already knew where I was.

Suddenly, he deliberated for a moment, and anxiously said, "Yufei, you went to Qin Mochen's wedding?"

"Chengzhao, don't worry. I came here today—" I wanted to explain, but before I could finish, Su Chengzhao suddenly shouted, "Come back Mo Yufei. Don't go. It's dangerous, come back soon! I'll pick you up."

Welcome to read next chapter He Became Gentle Suddenly ahead

Support "Excruciating Deep Love with You"