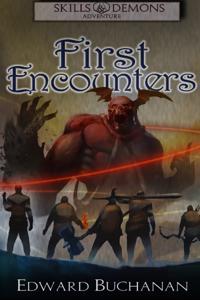 For months Mark has been bugging his friends to try this gaming system he is enamored with. Skills, Archetypes, and Demons. This system has a skill for everything and even different approaches for some skills. Instead of levels, he tells them, each skill has its own experience and level.

"As true to real life as a gaming system could be." at least it says on the box. When the group finally break down and decide to play it, they head over to Hunter's house to start. Next thing they know... trapped in the game.

Note: There is two different versions of this story, one with the game mechanics and dice rolls(this one) and one without. Some people have still said they preferred the lite/noncrunchy version so I'm updating a 2nd story with that version. It will lag behind this one a little but if thats more your cup of tea, check it out...  https://www.royalroad.com/fiction/29481/skills-archetypes-and-demons-first-encounters

I truly hope you enjoy.

Five friends wake up in a fantasy world ruled by a tabletop RPG system that they had just started to try out. A system where each and every possible action has its own skill that has to be practiced individually. The characters also quickly find out that when they die they will respawn at the same location without memories and all the earned skills reset to zero; it turns out that they have over time left a large amount of their own corpses scattered throughout the region. Will they ever live long enough to defeat evil and find the way home?

Style: The story is told in third-person limited style following the five main characters, but from the point of view of only two of them. The word choice is mostly good and the descriptions are limited but okay.
The action-specific skill system makes much more sense than what you often see in litRPG stories: when you start using a short sword instead of an axe you have to learn it from zero instead of relying on an illogical global "one-handed weapons" skill.
The litRPG elements themselves are a blessing and a curse. The basic mechanics of the story lead to lots of dice rolls with or without success in the respective action, explaining why the hit landed or the foot slipped. I mostly like that. On the other hand, when the characters are grinding a skill while doing something else (like gathering mana while walking), do we really need to (rolled 9,6,3: success, 6543 more until level up) see each and every (rolled 1,2,3: failure) dice roll that happens (rolled 5,6,7: success, 6542 more until level up), each taking 2-3 lines in (rolled 2,4,6: failure) the text, cluttering the page and (rolled 4,9,9: double success, 6540 more until level up) disrupting the reading flow?
Now, if I don't like it, why don't I read the non-crunchy version that is posted in parallel on RRL, where all mechanics are hidden? Well, I do like to read about dice rolls and leveling up, just not in every second paragraph. E.g., those failed "awareness" skill checks where the reader knows that something surprising is about to happen are great and I don't want to miss them.

Story: The two main premises of the story (action-specific skills and restarting from zero) are very interesting but make reading it rather taxing. The pacing of individual scenes is good, but that of the general story is sloooow as the characters keep dying and so everything has to start again from the start. Even though most of the chapters so far repeat the same basic structure (respawn, set out, die to something) we have seen glimpses of various plotlines. As the world goes on regardless of their respawning, those plotlines advance and the MC party regularly meets people who have met them before, for better of for worse.

Grammar: Now and then there are errors, with a significant amount of them very basic errors (e.g. wrong possessive apostrophes), but that doesn't hinder the reading flow.

Characters: Phew, the main characters are really stupid. They learn that they are respawning in a fantasy RPG and have had to start from the beginning lots of times, but they still don't take it seriously. While after a while they at least do some grinding to improve their skill levels, they lack almost all common sense. Or how would you call it that they play pranks on each other during a quiet moment of a deadly fight? They are making the same errors again and again and for the readers that is frustrating. Of course they don't remember the earlier times and they might still believe it a game, but if you're suddenly in a different world you might want to think before acting, at least after you saw your friend die in a painful way. According to the author, part of this is intentional but it still hurts me when I have to read it.

All in all, while I like the idea of this story, it still needs improvement to keep the readers from giving up halfway.

Not My Cup of Tea

So the story itself is pretty good but a little to dark for me personally if you write something similar but less serious and grim i'll probably enjoy it way more.

Reviewed at: Chapter 2 - One of Many

A. what beautiful god damn comedy.

This book is great. Truly a blessed piece of enjoyment. I laughed, I had questions, I had more questions, they got answered, I laughed again, beautiful.

What wonderful violence - As of Chapter 7

Reviewed at: Crunchy Chapter 7 - By the Numbers

The story is just starting but I am enjoying it.  The characters haven't had much time to develop but they seem to be going in a good direction.  Also contains some fresh ideas, at least from my point of view.

First chapter was great, I can tell that I'm really going to like this book when there's a little bit more.