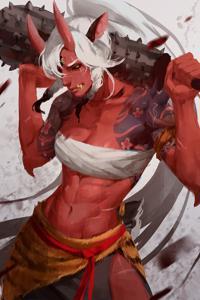 Toil and Trouble, the Tale of the Summoned

Ask not the penguin how the eagle soars!

Once upon a time, a young woman named Zoey LARPed as a demon, and the System decided to suck her up and spit her into another world as one. This was a strange filing error on the universe's part, but once Zoey realized it was a better pay-out than flipping burgers for a living, she was all for it.

But then an all-powerful, mysterious organization demanded she pay taxes and a group of rebels on earth told her she needed to save humanity. Can't a girl make a little extra coin on the side without everyone hassling her?

Zoey is just a simple girl trying to make her way in a world that's lost its damned mind.

Ask not the penguin how the eagle soars!

Good story, but author abandons most of their stories

Interesting and engaging main characters. The whimsical nature is fun to read. Setting isn't novel, but still an interesting take on the isekai/litrpg genre.

Be warned though, this author abandons most of their projects. If you're hoping for a conclusive or satisfying ending this isn't for you. It's likely this will go on indefinite haitus at some point as well.

A fun summoning tale, with a naive MC

Good start so far for this one, just because of the author being Sunreaver, i expect quite a lot here, her stories are good reads.

Zoey is a LARP'er, she loves playing as a monster in their plays and does a good job at it, but one day it is different, when playing a demon, she somehow gets summoned to another world, mistaken for a demon and gets tasked to do a job. That is only the start of her troubles, because now she has a system accompanying her on earth, while certain authorities are not pleased at her for travelling across worlds like that and bringing a system to earth, but its worth it for her, since it pays so well and is more interesting than your average job.

The mc, well, she is fun to read about, and im sure the author intentionally wrote her being quite naive and stupid in how she behaves with the new situations she finds herself in, but this does get a bit annoying at times, i dont exactly mind that, but i can see it being annoying for many readers. I guess the author has something planned for her in regards with her naivety.

The premise here is quite interesting, one i mainly have seen before in the cliche filled Japanese webnovels and mangas, so a good author having a go at this premise gives this story a lot of potentional,  i look forward to how the author will handle both the summoning part with the other world(s?) and the earth part of the story. So far it does not look like that the worlds she is summoned to, will get any major development, but i dont exactly mind that. Be warned that at times, this story can turn very dark all of a sudden, that especially does contrast with the summonings, where it so far has been all go-happy.

Overall good grammar, though there are some typo's and other errors throughout the story, normally those should not pose a problem at all, and get corrected when spotted by readers.

The author's writing is easy to read, to understand what is going on at the moment, with the premise here, the author went in a good direction with the worldbuilding, making it mostly non-existent in the summoning parts, so it doenst slow down those chapters.

I will be fair that it is still early, so a lot could be subject to change.

On another note, expect that while the story will be of good quality and fun to read, it is rather unlikely for it to be completed, but i will still enjoy the ride while it lasts (and maybe it gets completed, you never know with this kind of setting how long, or short it can be.)

For sure a fun story that shows a lot of promise, if you dont mind the MC being naieve and making stupid decisions at times. Its currently a short read, so give it a try!

Even bureaucracy can be funny!

I generally hate comedic novels.  The same disconnect between the reality of the situation and the actions of the characters that make the stories humorous also tend to annoy me greatly.  A characters actions should still make sense within the context of the story, and too many authors use "comedy" as a resson to ignore the context.

Wonderfully, this is not an issue with this web serial.

As absurd as the situations and actions of our main character are, they all are something that you could imagine a person actually doing.  The giant bureaucracy that apparently controls Earth and the "system" has an actual and legitimate reason for their actions, which they are even kind enough to explain!  The author created a world where a nineteen year old girl who likes to LARP could become a half demon, be summoned to a world to clean a house, and then be sent into a VR training situation and decide to make their avatar have a dick and still have it make sense in the story!

Moreover, there are areas with actual serious intrigue with moral and mortal consequences!  The structure of the story, too allow for all this to occur, can only be described as superb.

An excellent serial that I look forward to seeing continue!

This is dropped, should you still read it?

Fact 2: SJ Reaver is a wordsmith, an artist of tongue and wit with a style that is unmatched here and elsewhere. You will find more spirit and personality in one of their chapter as in some entire sagas. You need to enjoy it.

Also, all the stories are part of a singular universe so it's like reading shorts!

read to 21 then switch to Mossharbor. And then the next one after that.

What can I say?

Dropping this. Simply because this is not what I expect from the title and synopsis.

And found out the this little surprise doesn't suit me.

Heads up. Being a summoned creature is actually her apparently illegal exterdimensional part time job, and yes, she have to go back to earth to report for work to 'men in black' thing.

Great style and use of the word.

Yet, the surreality of everything doesn't allow me to latch on.

First and foremost are the reactions of the protagonist, but she is hardly the only one suffering from "Alice in wonderland" syndrome.

Not for me, but damn well made.

Summoning: the moderately rewarding occupation you didn't know about

I love how being summoned to another world for grunt labor in hazardous conditions is almost worth it. Roughly one order of magnitude payout vs mundane Earth work. As long as you survive you get plenty of health potions, so great health care plan. Zoey's strong work ethic in highly non-standard employment situations, including standing up for herself to get the recognition and branding she deserves, is a delight.

The summoning aspect loosely resembles the one-way trip in: Demons of Astlan by J. Langland (which is a great triology IMHO).

In the most recent chapter 007: Zoey visits a pseudo-government agency that seeks to suppress her trans-dimensional shenangins. This strikes me as rather similar to the recent video game "Control" and the FBC building of highly variable geometry and oddball supernatural events.

In any case, I can't wait to find out what crazy job Zoey will next be summoned for.

I don't have money piles laying around

So heres a review.

I like it and I hope Zoey gets in lots and lots of adventures while getting summoned. And I hope she has a lot of fun while staying mostly sane (or not but that depends on the writer).

I have literal piles of books that I have yet to read, and I'm busy refreshing this fic's main page. That's how much I like it!

You've got a cheerful lead that is quite entertaining to follow, with a promising cast and cool worldbuilding. Go read it!

Stupid in a good way

This story is a unique take on this genre. Zoey is a fun protagonist, and I'm interested to see where this is going. Zoey is definitely stupid, but I personally feel it's a balanced level of stupid. She has done a few things that have been objectively poor decisions, but they were interesting, and I enjoyed the addition. She has yet to make me want to punch her, which is a win in my book.