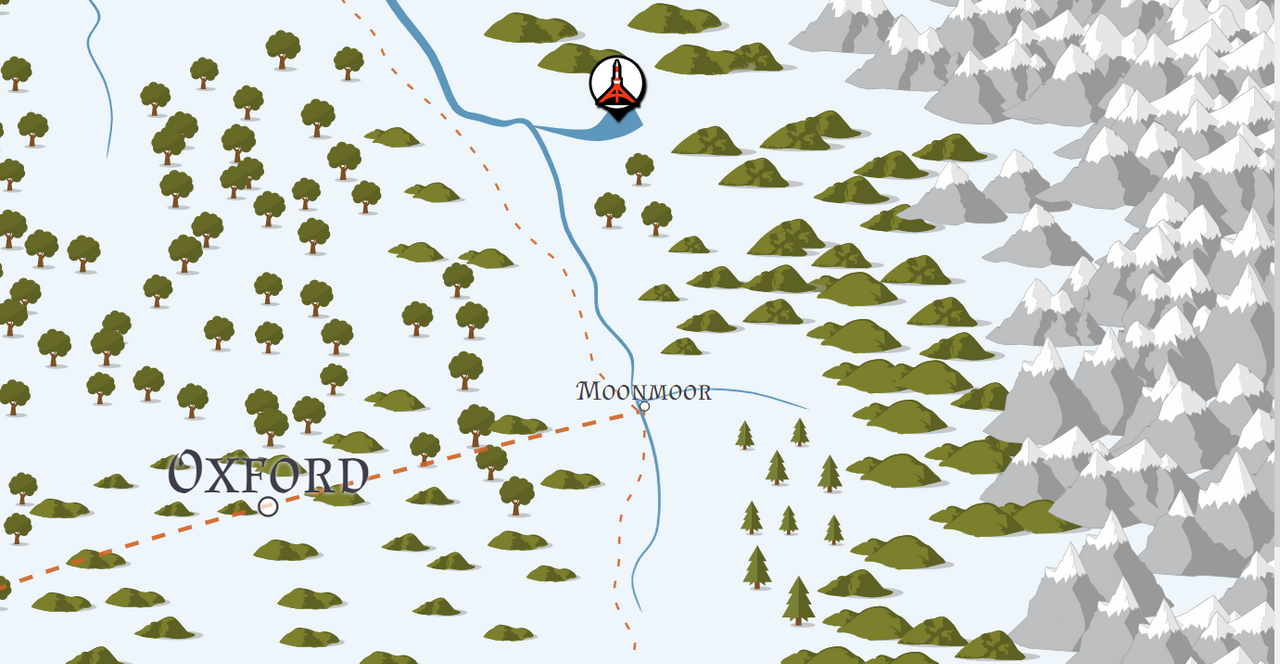 I don't quite good at riddle...

As I got right in front of the giant 6 meters tall door of the Magus Tower, two robots in front of me push the door in.

The door open, as it revealed the darkness inside that could overshadow the world. There wasn’t any light inside since it had been abandoned for thousands of years.

Fortunately, the robots had a body flashlight that could light the room. Then light starts to brighten the darkroom inside, revealing a circular room with 1000 square meters in size.

Inside of the room was a kind of round table with a weird carving on top of it as if it was an inscription of some kind. There were also 12 knight statues with all kinds of weapons in the surrounding edge of the room as if guarding any kind of intruder.

“Another golems? This must have been definitely a Magus Tower of the third Magus Empire era!” My eyes scan the surrounding for anything peculiar.

Strangely enough, the golems didn’t attack when all of the robots were in the room. That makes me even more warry as having an active enemy is better than an observant and unknown enemy.

Then, I come near to the table in the middle and realize it was a table that could be rotated. There was a diagram or some kind carve above it that seems to be some kind of a puzzle.

“Weird? There seems to be a pattern. Vonix, could you scan this pattern and found the answer?” I pondered as I see a complex pattern of some kind and a hole in the middle.

[“Affirmative, Scanning Initiate… Scanning Completed… this seems to be some kind of puzzle that a Magus usually used, Magus tend to cast their mana to it and activate it without messing with it”] Vonix answered in a still monotone voice.

[“Positive, the puzzle could be solved but that might activate the surrounding golems that were in hibernation, Proceed?”] Vonix added.

"Proceed!" Then I directed the robots to take position, circling me at the center.

After that, the three ‘Assistance Drone Robot’ come near the table and from them came out some kind of a pincher robot hand. The three-pincher hand then begins rotating the table to make it become some kind of a pattern.

As the ‘Assistance Drone Robots' were doing that, one by one of the knight golems at the side suddenly start moving and get down from the platform they were at before.

“Shit, they really are activating!”  I cursed in dread as the robot in the front switch to melee weapon they bring.

Just then, the golems start getting closer and closer, enveloping all of the robots. All of the golems had some kind of weapons in their hand: mace, sword, lance, spear, axe and even bow. There are two golems for each weapon there is.

"This is bad, I should test the water by sending one of the golems." One of the ‘Battle Robot' in the front approach the golem that wields a mace.

As they were about 3 meters away, the robot launch itself to the golem and swing its blade downward.

A sound of two metal clashing weapons was heard. The ‘Battle Robot’ and the knight golem had the same strength in this clash.

“Great strength, at least equal to a 3rd Rank Knight Apprentice, this is not good. There were only 6 ‘Battle Robot' left while there are 12 knight golems." My face starts to show an expression of worry.

After the clash between the two was over, I decided to split the remaining 103 ‘All Purpose Robot' into twelve parties with six of the party consisting of 10 of each and the remaining six with 7 each with of course one with 8 since it was an odd number.

I placed the six party that had 10 each to the ‘Battle Robot’ so it could finish off the 6 knight golems swiftly before helping the other six party that will hold the other.

As the plan was set into motion, the robots begin moving as I ordered and the six that had 7 each start engaging the six in melee while the other six start helping the ‘Battle Robot’ in range attack with their pulse rifle.

Then, an intense clash was happening in the room. I try to help the weaker formation with my electromagnetic sniper but since my sniping ability was still mediocre even with my enchanted body and sense, I was only able to shoot a few.

As minute by minutes passed, one of the golems that wield a spear got pieced by the ‘Battle Robot’. Then another golem that wields a bow got blasted to pieces as the robot shoot it with pulse rifle continuously.

Despite my robots were winning in the quantity and quality of the weapon, causality cannot be avoided. A few of the ‘All Purpose Robot' got blasted to pieces by the golem that wields a mace and axe after they destroyed the robot’s shield, with two got blasted and hanged in the wall by a bow golem user.

Shortly after, the battle finished with the last golem that wields a lance got split in half as the head of the golem falls into the ground, signifying the end of the battle.

Then, I collapse into the floor, mentally exhausted by the battle that just happens.

“This battle sure sapped my strength by a lot.” I complained as the ‘Assistance Drone Robot’ seems to have finished solving the riddle on the round table.

As the last rotation was done, A strange white light begin to appear from inside of the carve above the table.

Then, stair after stairs suddenly emerges from the wall of the room, rotating the room and ascending above until there were around 50 or so stairs.

After the last stair appear, a big hole open in the end way of the stair and light started to appear from inside the hall above.

“Then this stair should lead to the third floor. Weird, why the path below didn’t appear?” I begin to grow suspicious but then cast that aside as the answer should be located above.

After pondering for a moment and didn’t find the answer, I decided to explore the third floor and above first before going back to this floor.

The robots then begin to take the lead in front and start ascending the stairs. The stair had a hollow part to the next stair and doesn't have a banister for safety, making ascending the stair very dangerous if there were any trap that spring out from the wall.

As the robot got to the later of the stair, suddenly a part of the wall got out and push the robot out of the stair, falling to the floor below. Fortunately, the robot didn't get damaged in the least but if it were instead a human that got pushed out, the fall could cause fatal injuries.

"Hmm… What a classical trap, I should test if throwing an object will activate it." Then I throw a small item to above the stair where the trap was placed, strangely the trap wasn't working.

The trap seems to appear every time something that moves like a human passed it and retracted after three seconds slowly.  So, I ordered one robot to be a meat shield as tricking it with a small object wasn’t working. The robot will use the electromagnetic shield to minimized the damage and let the others jump when the trap was out to pass it.

‘I should rush out that part after it was out’ I thought as I prepared to rush when it was my turn.

Then, as the trap got out and pushed the shielded robot, All the robots behind including me rushed and jump over the trap and get to the next floor.

What was waiting for me on the next floor was some kind of an experiment room with all kinds of documents and books piling up on the side. There was also a lot of miscellaneous items at the center of the room.

“This must have been where all of the knowledge and information are stored. Good good good, getting all of this alone is already more than enough for the venture I just had!" My eyes were filled in excitement for the books of an Ancient Magus might have in here.

After calming down a little, I begin to scan the documents and the books placed at the side first. I realized that the documents were a record of an experiment about something that I don’t understand since I wasn’t a Magus, and also a lot of it was written in Magic Language.

“Vonix, could you gather the ancient language database from the book and translate them?” I begin to rummage the book to find the one that seems interesting.

As Vonix was busy controlling the ‘Assistance Drone Robot’ and deciphering the language, I found a book that had some kind of a vague golem drawing on top of it. The book was made by an unknown material as it had a funny texture.

Just then, a word that was written in the book got blurred from my vision before changing into the Common Language that I know. As I read it, I unknowingly compress the book with my fingers,

“Basic Golem Structure Manual? Holy shit, this must be a book about how to make a golem! I have struck it rich!” My eyes shone in excitement, as I begin reading the book.

‘No wonder the golem was so strong despite lacking technology. Unfortunately though, to make a golem one must be able to control mana and at the very least a 5th Rank Magus Apprentice to be a golem pupil.’

In this world, there is all kind of magic profession: Alchemist, Golem Master, Enchanter, Botany Master, and much more. The stage before a master is a pupil that Magus Apprentice could usually attain.

“I swear… that I will learn magic and become stronger in this world! Only by having power could I control my own fate and not be controlled by others.” I swear to myself full of determination in my heart as I reminiscence to what happen to the original Wyne and his family.

If there is anything to say, I'm good for a comment.

Don't forget to give a rating or review! I really appreciate it.

Bio: Trying to improve on writing despite so many thing.
I like a lot of novel like Lazy Dungeon Master and Overlord but i also like sci-fi novel.