This is the map showing Moonmoor and the surrounding. 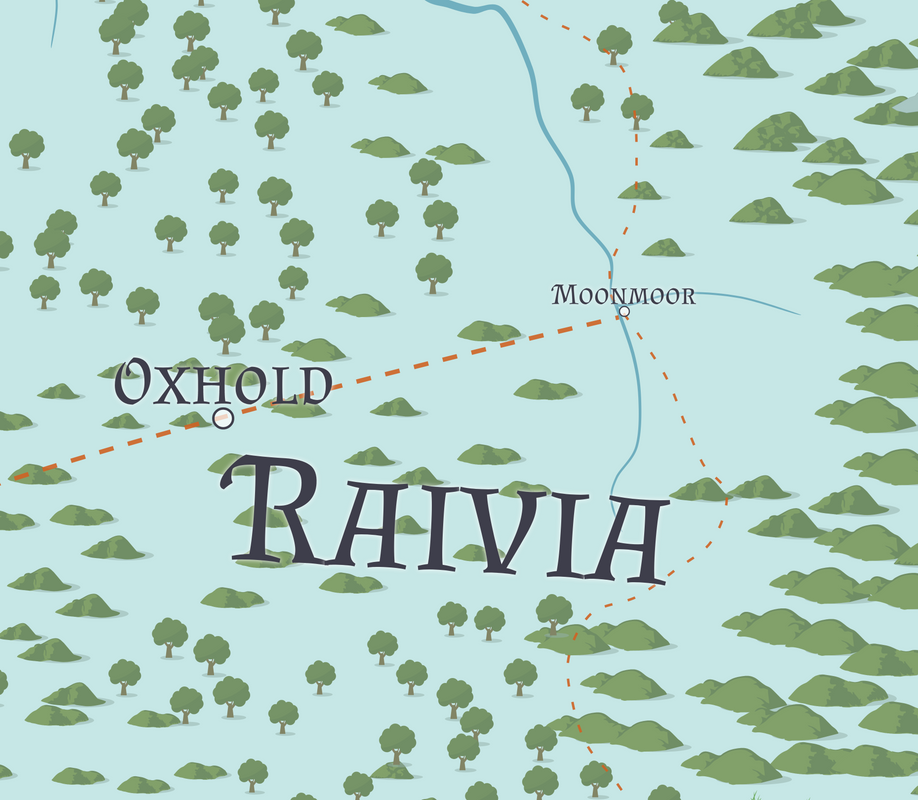 A white moon was shining brightly in the sky, illuminating the ground below and making the river in the surroundings reflect the white light. A cold night wind was breezing into the surrounding making anyone staying in here having goosebumps.

The town was full of people and the majority of the town’s folk are already asleep in their homes, only just a few places in town is still illuminated by the light and has activity.

Not far from town, there was a mansion. Inside one of the rooms in the mansion where an 11 years old boy sitting with his eyes close in a meditation position above a bed with an open blue book in front of him. A sound of inhaling and exhaling in a rhythmic manner could be heard from the boy. The boy was none other than Alex.

“Vonix, could you deduct the amount of time needed to open the acupoint if I were to follow this manual?”

[“From the data gathered, if the host were to cultivate according to this manual and with host’s potential, it would be needed 3 months to reach the 1st Rank Knight Apprentice”] Vonix replied with a monotone voice.

“That’s too long!” I shake my head impatiently.

Unlike the Magus path that requires soul aptitude, Knight’s path doesn’t place too much importance to potential even if it was still important. That’s one of the reasons why Knight is much more common that Magus is.

‘From what I read in the book; it was stated that dual cultivation path’s possible but the one that done so is so rare that finding a needle in a haystack is easier.’ Alex sneered while pondering what he should do.

After all, no one would stupidly waste time to dual cultivate since it will take too much time unless he or she is a cream of the crops with wealthy backing or just simply stupid.

“Vonix, is there any way to make cultivation faster?” I asked suspiciously while rubbing my nose.

[“Of course, by building the Synthesize Chamber, it is possible to create a potion and rare nutrition that capable to shorten the time of cultivation”]

“The collecting of iron will still need more time, is there another way to shorten it further?” I shook my head and try to find an alternative.

[“Hard physical training every day will help shorten it by 50%, with proper instruction, it will further decrease the time needed by 20% or so”] said Vonix in a monotone voice

‘As I thought, but even with that it will still take me around one month to open the acupoint, I really need to make the Synthesize Chamber!’ while I was holding my chin in deep contemplation, I was intrigued by something that was bothering me since morning.

“I was wondering but where actually your voice came from?” As I was guessing where it came from, Vonix replied.

[“To fuse with Host’s body, it’s required for me to become a nanobot and enter the host’s body”]

“Nano Technology….” I was expecting that but hearing it myself is still quite astonishing, then something light up in my head and I come up with a brilliant idea.

“Does the nanotechnology capable of opening heart acupoint?”

[“Yes, it is capable but the amount of knowledge about knight is still lacking and the nanobot lack of power and tool to do so, make it nigh impossible unless host makes the one-star Fortified Base and upgrade the nanobot”] replied Vonix.

“Damn, my way of ascending the heaven just collapse!” I hit my bed in discontentment.

Then after that, I continue my meditation and got to sleep a few hours later.

In a certain place of the mansion, a middle-aged white-haired butler is walking the corridor. He was currently bringing a lantern to light the dark place. Then he stops and bends his head to the left to sightseeing the calm scenery outside from the big window beside him with a tranquil expression. When suddenly he heard the sound of a footstep coming from behind him.

Then from a corridor came a women maid with a tied black hair and a quite beautiful face, suddenly the woman stops and gazes at the butler with a calm gaze.

“That’s unusual for you to wander here at night Sebas, what’s happen?” The woman then starts the conversation.

“It’s nothing Tia, I’m just worrying about our Young Master and the future of the Xendra Viscounty.” replied the butler.

“Is that so? I may be too sensitive but I feel that Young Master seems to change from the way he was before.” Then she sees that the butler’s face twitches a little and asked: “Was I wrong?”

“No, you were right.” he replied then continue “Before, Young Master doesn’t ever want to cultivate nor does Young Master ever care about the situation in the fief, it may be a good change that he became more mature but the recent over-purchased of iron worried me a lot.”

“I wonder what will he used the iron for?” the woman called Tia asked confusedly.

“I think it’s better not to ask Young Master, maybe he has his own plan.” The butler then suddenly turns his head to Tia then back to the scenery outside as if to warn her.

“As usual you were right, it’s been 20 years since I serve Xendra Family and 40 years for you. You know the fief situation like in the back of your hand.”

“Please don’t overestimate me, there may be still many things I don’t know happening in and outside the fief.” The butler closes his eyes in contemplation.

As Wyne was still an 11 years old child and still haven’t reached adulthood, all administrative work was done by Sebastian.

“In the end, no matter what Young Master’s decision, I will still be loyal to him as I was ever to the 2 generations of the Xendra’s Family before,” said the butler firmly.

“You sure are, so do I!” the woman agreed on the statement with a nod.

Then they leave the corridor to their respective rooms without minding anything else.

Morning came as the sun started to rise and people start working to fulfill their daily needs.

I was practicing my knight breathing technique before calling the guard outside to call Sebastian.

“Sebas, could you find me an instructor? I want to learn swordsmanship and manipulation of qi.” I asked while using my right forefinger to lightly scratch my right cheek.

“To answer Young Master question, I think Sir Gareth is the best choice, he is the head army of the Xendra Viscounty’s private troop and a 3rd Rank Knight Apprentice at that, no one else is better to teach Young Master from inside the territory!” replied Sebastian with confident.

“Then prepare the field and called him after breakfast.” I give my confirmation with a satisfied smile.

“Yes, as you commanded!” bowed Sebastian before leaving from the door.

After that was taken care of, Wyne continued his breathing technique before going out to have breakfast in the dining hall.

Not far away from the mansion, there is a field with a size of around a basketball field with one big muscled man and a boy of around 11 years of age standing in the middle.

“So, you were Sir Gareth? As expected of the head army, you certainly don’t disappoint me.” Wyne praises the muscle man in front of him.

“Of course!!…. Ehemm.. please excuse my rudeness.” Gareth smiled pridefully then reminded that he was talking with the Viscount.

Gareth was a gray-haired middle-aged man around 40 years of age and was still in his prime. He was also a prideful man that likes to boast and certainly behave like a muscle headed man, although his commanding ability certainly not lacking.

“Indeed, and Sebastian said that you were proficient in using a sword and the highest cultivated person in the territory.” I gaze at him with a hidden inspection.

“Just as he said, he was correct, then let’s start with swordsmanship!” Then Gareth takes out his wooden sword and told me to prepare mine.

Then I take a wooden sword that has been prepared at the side of the field and start practicing swordsmanship for the first time in my life. What I was surprised about is that, Gareth was so proficient in teaching, even more so is that Vonix is helping me to use the sword and move my body effectively.

“Wow… Young Master, is it really your first time using a sword?” asked Gareth surprised that I was improving very fast.

“Certainly so, this is indeed my first time, what’s wrong?” I asked confused.

“Then Young Master is a genius, with this potential, Young Master will certainly be a fine swordsman in just two-week no… a week!” Gareth might be prideful, but he was honest with how he evaluates.

Then we practice until midday and we have a lunch break after that before continuing our training after.

“I think it’s the right time for me to teach Young Master on how to manipulating qi,” said Gareth full of certainty.

“Then please do so!” I nod my head and my eyes sparkle full of expectation.

After saying that, Gareth teach me how to manipulate my growing qi in my body. First, he told me how to sense qi in my body. I started to sit and got to a meditation position while closing my eyes. He told me that a normal person needed around a week to sense qi. With the help of a nanobot (Vonix) and a guide from Gareth, I manage to sense a strange yellow-white string around my body just before night.

“Is the string-like thingy is a qi? If so then I manage to comprehend it!” I asked, not too sure whether it was the case or not.

“Wow… Young Master is indeed a genius, the string thing around the body is indeed qi and Young Master only needed a few hours to sense qi, even I needed three days to do the same.” Gareth was surprised while then praising me with a trace of pain look in his face.

‘Seeing that, I don’t know whether to laugh or cry.’ The real reason I manage to sense qi so fast is because of a good instructor and a nanobot in my body but a healthy body does indeed have a difference in speed when practicing qi.

‘It’s a good thing that Wyne’s body is healthy and better than average people in this world.’ I relieved for the body that Vonix choose.

One of the reasons aristocrats manage to hold their position and oppress people in this world is because of the better condition of their body, with nutritious food they eat every day, how could they not have a good body?

“Now that the sun already down, I think it’s better to continue training tomorrow,” said Gareth, breaking my contemplate.

“Then Sir Gareth, see you again tomorrow.” I nod in agreement and then left the field.

“Teaching a rough diamond like you, how can I not be here again tomorrow? hahaha…. Teaching a genius sure is fun!” Then Gareth leaves the field too.

Bio: Trying to improve on writing despite so many thing.
I like a lot of novel like Lazy Dungeon Master and Overlord but i also like sci-fi novel.