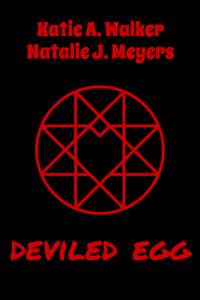 After shifting and getting dressed, I decided to do something I had been avoiding. Something I tried doing the first time I changed, but had ended up in tears over. Taking a deep breath, I turned to the mirror and took a long, thorough look at myself. The brown hair I was used to turned black as coal and softer than clouds in my succubus form. My horns were kind of short, poking out of my forehead with the tiniest curve, kind of thick, like a small potato, and stubby, ending in a rounded bullet point instead of a sharp spike. My eyes looked the same, but with more life to them, more feminine, and having an odd yellow ring around the outside of the pupil. A small button nose, my chin still pointy but definitely rounded out enough to be girly, and lips I honestly wanted to kiss. And, from what I saw in pictures, I looked like mom when she was my age. Just with scarlet skin and horns.

Body wise? I had lost about a foot in height, going from 5’9” to 4’9”, feeling very tiny. It was weird to see stuff from this angle. Even weirder when I didn’t feel like I lost strength, but instead gained it. My arms toned only ever so slightly, still feminine but the muscle apparent upon closer inspection. My tum had a small amount of chub to it, compared to how skinny it looked in my guy form. And god call me a grandma but I can only describe my hips and thighs as thicc. Two C’s minimum.

It was weird. Having this body felt weird. I didn’t hate it, I wasn’t disgusted by it. Hell, it felt more right than my guy form for whatever reason. Not completely right though, like something was missing, as if the printer ran out of ink while printing my description. A girl body shouldn’t feel right for a guy though, right? Especially not while wearing an outfit as feminine as I was now wearing. A peach pleated plaid skirt, black stockings, light brown rocker shoes, and a top that mostly matched the skirt in color, except that ended just above the bust, the rest of the top being black, the sleeves puffy and ending in white ruffles. I looked cute. I felt cute. I looked like an incredibly adorable, preppy devil girl. And I could only spin and make goofy faces and poses at myself in the mirror. The girl in the mirror mimicking my every move perfectly, giggling like I was. Oh this was new. I was giggling. I didn’t really express my emotions much, unless they were anger or annoyance. But, showing joy felt nice. Even if I didn’t quite get why I was so happy.

I didn’t bother knocking on Leonard’s door this time around. I just opened the door and went in, surprised it was unlocked. When Leonard popped out from his piles of books and saw me, he looked me over. “Oh. Huh. That’s new. It suits you.” I blushed a bit at his comment, grabbing my wrist awkwardly.

“Uhm, thanks.” I approached him as he swam out of his books. “So, how do we do the search?”

“I take the ground, following a pendulum, you take the rooftops.” Leonard took out a strange pendant, tied to his hand as it was floating in the air, currently pointing towards me.

“Why should I take the rooftops?” I crossed my arms and huffed, trying to look intimidating but definitely failing.

“Because you’re the one with superpowers? The only things that can physically harm you are magic and stuff not from this realm. Unless somebody got an angel’s sword to throw at you you’ll be fine. Hell you can do superhero landings.” Leonard started making his way outside, as I awkwardly followed him to the elevators.

“Oh. So, no broken bones?” We both called an elevator, one going up the other going down.

“Well, you’re a succubus, you work on tantric energy. Your body is supposed to survive stuff kink artists draw… Not… Not that I look at those pictures.” Leonard turned his gaze away, and I rolled my eyes at him.

“Dude I saw your fursona wallpaper, and you handed me a fucking vibrator. You’re a kinky fucker who has seen more stuff than a person should ever witness.” The elevator pinged, and I got in before he had a chance to reply, sticking my tongue out at him as the doors closed. When I reached the roof, my phone pinged with a text from Leonard that just read “Am not!” It made me snort. Looking over the city, I didn’t know where to start. So I just sat down and waited for a message from Leonard if he got any clues.

Well, maybe I could get some clues from that apartment. Just hop down the elevator to A-401 and see what happened there.

The ride down wasn’t awkward. What was awkward was when I stepped out of the elevator and saw a guy standing in front of A-401. Light brown skin, average height, hair cut in a blue fauxhawk. The moment our gazes met, I started pivoting on my heel to skip the elevator and just throw myself down the stairs like a ragdoll. Would probably make a hilarious reaction gif... But of course, the guy spoke up. “Hey, wait, you went through the same thing Amy did?” I was tensed up and holding my breath when he asked me, but I loosened and faced him, awkwardly nodding.

“Uhm, yeah, A-101 was doing something stupid and we all got hit by it. He’s currently running around looking for folks.” I scratched the back of my head.

“Fucking idiot. What a dumbass.” The guy sighed and rubbed his face in frustration.

“How do you know A-401?” Maybe he’d have some clue as to where the occupant went. I think he called her Amy?

“I’m Amy’s boyfriend, Diego.” He extended his hand towards me to shake it. “And you?” Oh fuck. Oh shit. He wants a name. I can’t give him Peter as a name, it would be weird, and I don’t want people associating Peter with succubus form. Shit. What do. I shook his hand.

“I’m… Lily.” Of course that name was the one that popped into my head. I asked mom what she’d have named me had I been born a girl when I was very young and she was still with us. Never thought I’d actually use the name in real life. Mostly I used it when I played girls in games. Which was always. They still got better customization options and look far cuter, so sue me!

“You hesitated about your name there. How come?” Oh dammit, Diego noticed. Well of course he noticed that pause was longer than the line to see the dictator executed back in 2035.

“I don’t usually look like this so… trying to do a secret identity thing I guess?” I shrugged and gave an awkward smile.

“Huh, so you don’t always look like a cute demon girl?” His question gave me butterflies in my stomach. It felt weirdly nice. And I was sure it wasn’t because I was falling for him. I’m not into guys at all. It wasn’t the same butterflies I got when Tracy kissed me in middle school... before she apologised for using me to confirm she was gay. No, this just felt nice.

“Nope, and I’d rather not say how I usually look. Anyways, uhm, any ideas where… Amy, was it?” Diego nodded to answer my question. “Where Amy could have gone?” I could see the gears in his head turning as he scratched his chin.

“I really don’t know. I just showed up here yesterday, knocked on the door, got a weird text from Amy and haven’t seen her since.” Now it was my turn to think, to figure out where she could have gone. But I didn’t have to think for too long, as I got a message from Leonard. “Found a Blue Oni lady behind the cinema, feeding on the unsold snacks. Might be A-401.”

“Huh. Looks like local dumbass wizard has found someone. A Blue Oni lady behind the cinema. Guess I gotta rush over there.” I called the elevator for the roof once again, before I hear Diego clear his throat.

“Do you need a ride? I could drive you over.” He pulled out some keys out of his pocket and jangled them.

“That’s generous, but I think I should try using the superpowers I got according to Wizard of Loss. See you there?” The elevator pinged and I got in, as Diego gave me a thumbs up and ran down the stairs.

The figure rose from his chair, cackling to himself as he looked over the video feeds. “Oh this is fun. 201 turned into a trap now did he? Accidentally lost his dick and won’t miss it at all?” He walked to his window and jumped out, taking to the skies. “I will have so much fun messing with a kid like him. Oh how I miss the chans, the fucking SJWs just had to take them down when they killed our righteous leaders!” It didn’t take him long to notice and start following his prey.

I didn’t expect that running and jumping around on rooftops could be this fun. The air whizzed past my slightly pointed ears as I soared in-between buildings. Was it smart of me to wear a skirt for it? No. But, it was fun. Like an extreme version of spinning around while wearing it. As I launched myself forward once more, just one road away from the cinema, something struck me hard. Flying to the side, I fell down on one of the rooftops, as something I should have been expecting landed opposite of me. Arms that had the pinkie and ring fingers extending further than they should at a weird angle, skin stretched between them and the creature’s torso. Bald, eyes sunken and sickly yellow, almost like a chameleon’s in how they constantly moved around. Nose nearly gone, nostrils stretching up weirdly. Mouth filled with sharp nail like teeth, narrow and many. Definitely a demon. And a scary one at that.

“Well, well, well. 201. I didn’t expect you to leave the complex as your freakish self.” I didn’t recognise the voice, but he knew me. Which was scarier than how he looked... “Truly amazing you still had the balls to walk outside, pretending to be a cute little girl.” He stepped forward further, putting one of his feet down on me, leaning forward. “Now me, I have to thank your greasy boyfriend in 101. 70 years of my life back, and wings? What more could I want. You, though, you got the rough end of the stick.” He kicked my face with his other leg, before flying back. “Now man up you sissy and face me!”

Hey so thanks for reading, and if you don't know I'm not doing great financially, got a couple tweets and tumblr posts up, so if you could click that paypal link or join my patreon I'd really appreciate it a lot.

Bio: Just a Czech Trans Lesbian writing fiction where girls get to be themselves and get the bodies they always wanted, even if they don't know it yet.