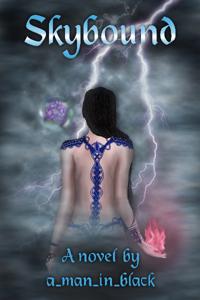 The adventures of Morgan Mackenzie and her sidekick Lulu the Loofah continue! The [Skyclad Sorceress] has made new friends, discovered she has some enemies, and now along with the Worldwalker Dana and the survivors of the Expedition she is working to get out of the Wildlands.

Meanwhile, the Deskren have beseiged Fort Expedition, and The General rides with his troops to their relief. He is followed by The Hammer, leading the Children of the First Beast. Certainly an impressive and dangerous force, but will they get to Expedition in time to save the city? If they arrive in time, can they hold the walls until the Tribes arrive?

As the northern continent slips deeper into autumn and winter, the Empire in the south prepares for spring and the planting of crops. Their raiding campaign into the north has not gone well, and tensions are rising as food shortages loom, and all is not as it seems in Nouveau Deskra.

Skybound is the sequel to Skyclad, and is basically attempts to build a story with an epic scale but does so poorly.

The basic premise of the story follows from that of Skyclad, a portal fantasy with people from Earth coming to a waning world.

Skybound is a story that wants to be an epic, and is trying to rush to that instead of building up to that scale properly. It attempts to build epic scale by having every chapter jump to a different POV and a different storyline. That results in a world that has breadth but a lack of depth, and a story that is a scattered mishmash of plot devices and 1-D characters. The main character is one of only a few developed characters in the story, but she barely appears.

A further issue is the way the POVs are handled. Readers enjoy multiple POVs done well, just look at some of the most popular epic fantasy series. All of these stories took the time to built up each POV into one with depth. This story tosses out new POVs more than it revisits previous ones, and it loves ending chapters on cliffhangers. Those cliffhangers will likely not be resolved for months since that storyline won't be revisited anytime soon. In that light, POV-based criticisms of the story become much more reasonable, since its not that people don't like multiple POVs, its that they don't like multiple POVs done badly.

Overall, Skybound follows up on some good ideas, but its execution is so rushed and poorly done that I wouldn't recommend it.

Lost in the side characters

I still enjoy the story but it feels diluted by too many side plots and characters. By the time the author gets back around to the main character, I've forgotten what was going on with her story.

It seems like many of the characters should be given their own stories in a shared universe. Those characters are interesting and I would enjoy reading more about them. I just want to read about the MC of this story more.

UPDATE: As of the most recent update (Ch. 15), 4 of 17 installments include the main character. The rest is about side characters.

It’s good, but it’s too muddled with too many character point of views

Reviewed at: Chapter 12: Gatecrashing and Other Recreational Activities

Ok, so I still like the story, I like Morgan and the loofahs, heck I even like a lot of the side characters, they're interesting. The problem is, there's too many of them. And unlike other novels who usually spend like 1 or 2 chapters to them, with this story it's the opposite, with Morgan having 1 chapter in between 2-3 of side characters.

And if the story was releases every other day, or heck, every other week, it's fine. But we have to wait for months for what will essentially be an interlude. We came for Morgan, and we want to see more shenanigans from her. World building is good and all, but not like this, not like this.

Not an Epic, but an epic failure!

Way too many chapters about characters that have no influence on the story so far whatsoever. The MC is only a sideshow by now, which isn't epic, just stupid and confusing, nothing connects the MC with the other POVs. The reader can not look into the head of the writer, therefore not knowing what the possible reason behind all this is, it's just aggravating! Even the litrpg tag doesn't apply anymore, since there's no mentioning of that anywhere.

This story went too "epic" too fast and too soon, without giving the MC any kind of compelling conclusion, no completed character arc. All while adding sidestory after sidestory with characters one can not care about.

Sidecharacters and sometimes an MC appears

If a story is about 1 person, I expect to read about that person, not 13567325 unimportant side characters.

50% of chapters are taken up by people you don't care about, know nothing about and all they do is play second, third or fourth fiddle to drive along a story line we don't even care about (because we dont know about it yet).

I could compress the content of the side-character chapters into half a page of writing without losing ANYTHING of the story relevant content.

What makes it worse is that the story starts out well enough with lots of chapters following the MC, only to then STOP and focus on stupid stuff across the world. NOTHING sucks harder than waiting for a new chapter only to be delivered a side-character chapter, while your MC is left somewhere on a constant cliffhanger.

Love the story but irritated

this one not so great. Not because the story is bad. It is because you are writing multipul chapters for side characters. It feels like you are taking your character notes for side character's and putting them in the book.  The world building is good but shoul be done using the main character's. You have enough plot lines now drive the story forward with them. Think of robert Jordan, Brandon Sanderson, or j.r.r Tolkien and the way they write.  They sticks with one plot line or two per book not swapping back and forth all the time. When they are swapped its after an arc in the plot line is closed.

One of my favorite stories!

Reviewed at: Chapter 20: Claim the Sky

First of all, I see plenty of complaints about POV characters, and this was true in the first book as well.  I hate to state the obvious, but since the main character starts out in BF Nowhere and is largely solitary for most of the first book, the additional POV characters are the only way to actually create an active world.  While I do have a habit of skimming when I am really interested in what is happening on a single thread, I don't find it confusing.  In fact, I am looking forward to the point when all of these threads tie together.  It seems like it will be a lot of fun!

very well written, and engaging characters. even the side characters are well done, and would do well with a novel of their own.  the world is constant and well thought out.

alot of people seem to hate on the author for building a well filled world and cast in the novel. its going to take time to come togather.

Reviewed at: Chapter 19: Quoth the Raven

I enjoyed the first book quite a lot, this second book however is a great disappointment, the advantages of the first book disappear and the problems of the first book get ever larger and more present, for example you get so many point of view changes thrown you across and even within various chapters that it becomes difficult to follow, the main character who we became hugely invested in basically disappears, the litRPG elements basically disappear and worst of all, some of the ridiculous "Epicness" stuff that popped up a couple of times in the first book but was generally ignorable becomes front and centre mainstage spotlight hogging - you just can't get away from it!

I'm not going to go in depth on explaining about that because I just end up renting which isn't conductive for a review.

One final point, in order to progress some of the storylines, in a way that feels designed to push to the epic moments, characters that previously seemed intelligent and well reasoned become complete fools, exposition disappears and essentially we just get thrown:

One final point, in order to progress some of the storylines, in a way that feels designed to push to these epic moments, characters that previously seemed intelligent and well reasoned become complete fools, exposition disappears and essentially we just get thrown:

well done everybody congratulations from angels and gods.

Like I said I really enjoyed the first book but this second book really let it down.