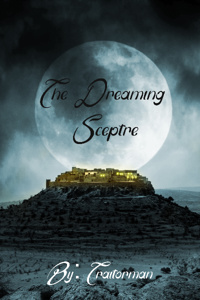 The Merchant Prince Cas wields a vile magic to control the dreams of all those that sleep within its walls. A pair of thieves break into his palace to take his secrets and treasures, yet a grisly fate has awaited all those that failed in the past.

There will always be heads for Cas' pikes.

This story has a sequel called The Ogre's Pendant

All stories and characters - including The Dreaming Sceptre - written by Traitorman are created by and are the intellectual property of J.M. Clarke

I tremendously enjoyed this! The style is something I'd traditionally consider too flowery, but in this case, it matches the story perfectly. Every descriptions takes you directly to the scene in depth. The characters suit the stories to a suit.

Finally, this story happens in the time and chapters it should. So it's short, but perfectly paced.

This story is excellent, the style is unique and memorable, the ambient action is vivid and you can felt it, I will expand the review when I finish reading it.

Edit: I read it through and through, it was a magnific journey, the characters are amazing, the story and style are amazing. Will probably make some fan art of this.

I never read anything like this on this site. It's professional-level writing.

I Won't Be Sleeping Tonight-!

A wondrous tale that won't allow you to sleep for sure!

A Sword and Sorcery fantasy, the genre primarily focuses on exciting adventures and I would definitely say that this story clearly achieves its genre! I want more of this!

If you hadn't read the story yet, read it already! I love the protagonists, they're both likeable characters that I'm definitely looking forward to read on more about. You can grow to care about them. I would say more but I wouldn't want to spoil the chance for the reader to get to know the characters themselves!

The world is quite vast, as the characters would mention people and culture that are quite varied from one another. They are mentioned somewhat in passing (afterall, we need to stay in track with the plot!) but it shows that the Author had developed how their world works. Surely after this chapters, we may get the chance to explore more right? The heart of the story is in a city that is plagued by a Merchant Prince. The city was developed nicely and portrayed the life of the people residing within it.

Each chapter was made by the Author to be a fulfilling read! The chapters are well length and paced for maximum satisfaction of the reader. Right now, five chapters with the length of 70 pages! I do admit that some of the long block of texts have made me unnerved from reading it, although it may be because I am reading on my phone. However, one can definitely say that the Author was well descriptive with their world, protagonists' actions and such that you could imagine the scenes through your mind!

Quite good! There's not much I can say on this, but I managed to seamlessly read through the story without anything that put me off. You're doing great!

This one does not require of any long exposition to understand what exactly one character is casting from the other one. It's simple and direct, you get what you read and also feel that wonder that sorcery and spells offers. It does not treat the reader as somebody who's new to magic, after all the world they're in have witnessed it. Thus we don't have to squint at it, gawk at fireballs and any other meddling thoughts, magic is simply magic! Think too hard and you'd be dead before you know it.

This isn't the last chapter right? I want to read some moreeee. Go check it out guys and leave your thoughts! We need more of this story!

An excellent story with beautiful description, defined and engaging characters, and a plot that stays true to itself from the start.

If I could give more than 5 stars, I would so here. Traitorman's style is clean and elegant, and his description is delightfully detailed. Although this is his first book on this site, something tells me he has both read and written a lot of quality works before this. As many others have said already, his style is far above Royalroad's quality and worthy of being published already.

Enjoyable story that is above all clear and clean. From the very start, we are told what we can expect and Traitorman delivers just that. There aren't any distractions to this, and I enjoyed it greatly.

Traitorman has clearly edited this with a fine-tooth comb already as I only found two minor errors in all. Sentence structure was put excellently and allowed for a smooth flow.

This story has a small cast, but as I mentioned before, they are all distinct, clearly defined, and engaging. Although the ride with them was short, I made a connection with the two main characters near immediately due to how well they were characterised, and the villain was an apt one. It was refreshing to finally find a story where every introduced character served a proper purpose.

I have no doubt that Traitorman has spent a great amount of time and work on The Dreaming Sceptre, and I believe it has paid off with a wonderful read. A must-read for sword and sorcery fans on this site, and a superb introduction to the genre to those unfamiliar with it.

I came across this story when I saw The Ogre's Pendant in the list of top active stories. After reading the first chapter there, I thought to myself, "Damn -- someone on Royalroad who can actually write??"* Then I saw it was a sequel, so I moseyed on over here and gave this a whirl.

This is a treat.

Traitorman uses a very vivid yet minimalist setup to deliver dazzling sword and sorcery action in a tight little package. Given the story's brevity, he understandably plays heavily on stereotypes, but he still delivers a very memorable person in Wurhi, the character whose perspective we're given. I'd like to have seen more depth to her new partner in honorable crime, but the story's short enough that I can't say it truly bothers me.

There were a couple typos that I noticed, as well as an occasional formatting issue (some paragraphs that were missing the space between them, I think). I also felt that some of the dialogue could have flowed a bit more smoothly during the later action. But in terms of overall writing quality, the story stands head and shoulders over the majority on Royalroad. I hope we see much more from Traitorman in the future.

*To be fair, there are more than a few talented authors around here. But Traitorman's work here is quite rare in that it actually seems quite close to novel quality -- probably because there's absolutely no filler; I never got the sense while reading this that he was churning out his word count for the day. I'd love to see more content like this out of truly serial stories, but I get the sense that's a very difficult target to hit.

This was an AWESOME story and superb storytelling. Incidentally, I happen to like old school sword and sorcery as well! Rich dialouges, character building and smooth transition between scenes. Have read Ogre's pendent upto the camp annihilation and it's absolutely amazing. Would recommend this any day. A.Must.Read.💖

Whew! Came here from The Ogre's Pendant for this prequel and it did not disappoint! Short, sweet, and to the point, this story reads like an old school high fantasy novella. It's got the action of Conan the Barbarian and a setup that reads like Dragonlance with a sprinkle of Lovecraft and Tolkien. Haven't read a story in this style in years, didn't realize how much I missed it.

The plot flows from one point to the next, and while a little light on some details,

(Minor complaint really, but for a man that was starved for days, Kyembe certainly seemed a little too well rested to infiltrate a merchant princes mansion the night he arrives in a new land. Just a minor personal complaint that comes with this style of writing, where the characters are fallible but always come out on top. Doesn't detract from the story, and again this comes from the style)

it really doesn't matter too much. The backstories and world building present definitely make up for any shortcomings there.

Love the characters, truly. They have unique and opposing outlooks on life that manage to compliment very well. Definitely see D&D/Dragonlance/Forgotten Realms infuences here since both characters are half-breeds of a sort, but that just adds to the style. One complaint to the author:

I'm afraid that Wurhi may end up playing too much into the tropes of her other halfs nature, which is something I did see in the other book. That's all well and good, and she has her moments, but I don't want to see this turn into a situation where she just becomes a point of comparison between more "normal" characters and Kyembe and the Solidblade (who shows up in The Ogre's Pendant). Kyembe for example, is slightly OP but not unnecessarily so, such as in comparison to another famous elf (Drizzt Do'Urden). Wurhi seems to be edging closer to the bad side of the cowardly rogue trope and getting stuck there, which would suck for such a great character.

Please flesh her out some more! Reading The Rat in the Pit next, which hopefully gives Wurhi her own chance to shine!

Only a prologue, but a damn good one

This fiction is written in a unique and very descriptive style with absoulutely amazing grammar. The setting is a city called Zabyalla, a tiny part of a big and interesting world. Even the characters' introductions are different from what we are used to because of the influeces of the world they live in. The story very short but interesting nonetheless. The main characters are likeable and the antagonist has a clear goal, everyone clearly has a backstory and are not just there for plot convenience. Kyembe's personality brings up questions which are not answered. Normally, this would be reason to lower the score, however, I think of this more as a long prologue than a short story.

TL;DR: This is not a perfect story but instead a perfect prologue that makes the readers truly desire to know more about the world and the characters living in it.

Criminally unpopular, this short story is excellent in every way.

I can find no flaw in this story, for it delivers exactly what it promises: High Fantasy with the author's heady prose. While it is no groundbreaking plot or novel deliverance, it sticks to the well-conceived formulas of Swords and Sorcery wonderfully. The author truly executed his ideas in a magnificent fashion. Very recommended for a change in pace among the stories on this site.