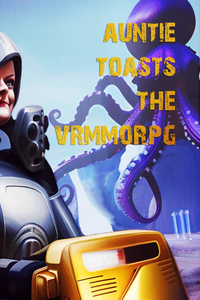 After Flora Fluss burns down the kitchen, her son insists she is too old to live alone. She's got two choices. Either move into a retirement home or spend the rest of her life within a virtual reality game governed by society's most advanced artificial intelligence. When you've worked a lifetime as an engineer for home appliances, naturally, you go with the option that has more toasters.

Soon, Flora finds out that the virtual world is more familiar than she thought. Though, it takes her a while to get used to the idea that tanks don't hold water or oil but the aggro of mobs.

Auntie toasts the VRMMORPG contains cute crafting, complicated game-mechanics plus how to exploit them, unconventional training methods, and a lot of toasters.

For additional information, companion vids and pictures, please check out my Patreon posts with the tag #attv.

You want to get notified on Twitter or Facebook when I upload a new chapter? No problemo!

The mad-engineer meets the energizer bunny

This story takes to you.

the Virtual world is currently an open world with many possibilities, from Sci-Fi to toaster competitions going through the magical slash-hack.

The MC is fun, with a down-to-earth kind of humor mixed with a tinkering-engineer spirit.

She is both trying to min-max for the technical aspect of it, but totally into granny-stuff, and not at all interested by the normal gaming things.

She is more a tinkerer-inventor than a pure engineer, but she has enough of the engineering part that it's great.

A surprisingly pleasant read that tickles your funny bone.

Reviewed at: 16. The Seven Masters Dojo

I will not lie.  I'm not the biggest fan of the whole VRMMO scenario, but this story puts a smile to my face. The story gives us a very interesting main character who is one of the rare elderly main character in these stories and web novels in general.  I love the character and her adventures in the virtual world and I can't wait to see what comes next.

So this is a nice story. I just need one word to describe. Toast.

Yet it is already in the name.

A rapid summary to keep things simple and technical:

Character: Aunt, and son. Those are the most important ones on first 16 chaps. The Aunt is 3d while son, the AIs, the bleeper and others are just there to show MC. But thats the purpose, we care about the aunt... And the hidden char: Toaster-kun. 4.5 although it should be a bit less. Guess I am in good mood.

Grammar: Minor typos not important or relevant. I am not one of those grammar nazis, I read harder stuff with worse grammar and it isn't relevant if you don't have OCD or work as a writer/editor. 5.

Style: Good yet simple to me. It is enjeoyable. Nothing exceptional but it works for the story. 4.

Story: Auntie in VR is a very simple plot. Yet I haven't seen one like this so both fused gives a 4. What do you expect an aunt to do in VR, well to upgrade her body to a point that's different from her real life one and for an odd character-comedy-driven reason, to make toasters. Kill mob make a toaster tank, toaster plane, using a toaster to fry a dragon into bread... Well, something like that I imagine... How far can it go depends on author as potential of the story is enough for a story but not for a series. In my opinion.

Conclusion: enjoyable, freshly toasted bread made by an engineering M auntie that toasts herself. Beware of explosions and failures in experiments.

PS: For engineers and others.

Some tech jargon is not right, but it's fiction so who cares. Only one that molested me was something witht the skeleton rig that author designed... Make it game or realistic. But choose one. Omitting that part seems okay untik chap I read - ch 18.

The crazy virtual adventures of a retired engineer auntie!

Hahaha, this story is just so fun to read, so many reasons but mainly the main character.

Flora Fluss is a retired German engineer who even after her retirement retains her intense passion for engineering, and that does get her in quite the weird situations. After one such and a discussion with her son, she discovers about the existence of the Virtual World and is told how useful playing the game may be for her hobbies, thus she decides to go Virtual, just that she knows near nothing about games at all, and will undoubtly have a intense ride, causing chaos at times, much to her son's dismay.

Flora Fluss is just a great character, the author has captured the fact that she is a engineer very well. Along with that she is of age, and behaves like it (most of the time anyways), she is not afraid of discovering new things due to her engineering hobby, but has a low interest in the normal gaming stuff and rather does her own things. She can be quite eccentric at times, and especially a perfectionist when possible.

This story takes place in the near future, where Virtual reality technologies have been developed to the extent that your brainwaves can be used, so far not much else has been shown of what happened in the real world, rather the focus of the story so far is on the Virtual Reality.

The Game is quite well developed, with some fresh idea's used, nothing truly unique seen so far, but that is not necessary. Im liking how the MC can use glitches and exploits, but within a certain limit, since they will be patched. She is quite overpowered though, but not invicible at all. A thing i sort of have a doubt with is, the amount of ingame currencies, there are like 5 different ones, all intended for other things, i just feel like its a bit overdoing it with that amount,  Real money trading is also possible, but has been limited to a set amount so it cannot be seriously abused.

Good grammar in general, especially considering the fact that the author is not a native english speaker, few errors and typo's spotted, but they are still here. Normally they shoulnt pose a problem  for reading this story.

Nice style, it reads well, is enjoyable to read, it may be very slow paced (the character creation chapters are a good example of this) but it does not get boring. This is partly due to the fact that it is funny, with many moments that should make the reader laugh! One of the problems i noticed is that the stat tables get quite clunky, with how much numbers they have.

This story features quite a decent amount of technical terms, mainly due to the fact that the MC is a engineer. Dont be scared of the slow pacing however, its fun to read!

Greatly recommended to come read, it is so enjoyable while being slow paced, Flora Fluss is also a fun character to read about, and then there is the fact that this story is a VR one focused on comedy!

I love the premise of this story, and the main character (Flora) is incredibly fun to read about.

That said, it's too much about the litrpg numbers for me to really get into it. You'd need to be someone who is really into the maths behind games systems to be able to truly immerse yourself into this one.
As an example, we just recently got past a10 chapter streak of Flora going through a test/experience thing in game, where she throughly deconstructed all her varied Skills, how they worked, and what to do to improve them going forward.

I skipped the bulk of it, but it was apparently something that was voted for on her Patreon. If I am remembering correctly. So, to each their own, I guess.

That said, I am still following along and reading what story development there is between all the number crunching. And I am enjoying it still.

Hard to believe that this character is so fun and relatable.  The MC is so not your typical character.  She's a Granny, and proud of her age and her accomplishments.

She brings a fresh perspective to character creation and leveling philosophy.  Why level when there are so many stats and skills to gain at level  1?

Skateboarding to increase stats?  Why not?  And make a skateboard with a holographic projection that displays Granny's knickers while at it!  The better she does, the more those  Knickers get stained!

It really came as a surprise to me that I would find Granny staining her Knickers so damn funny.  Give this a try.  It really is worth it!

Reviewed at: 10. Banking and getting an AI

The characters are all original and fun, particularly the MC. Not to mention a seriously underrepresented demographic here (60+ women AND women in tech). The story (10 chapters) hasn't really gone anywhere yet but we've got a great understanding of the main character and a little world building on the side.

Honestly, I'm just happy to find another story that has the comedy tag that is comedy first.

After reading to chapter 50, i've lost interest here.  The story started strong with a great plot of an underestimated granny who leverages her design experience and fresh perspective to get a strong start to the game and earn some money. But the story loses focus.  Like an entire 50 chapters have gone by and she is still in Metaworld and hasn't entered the Cradle noob area of the actual game yet.

moreover the chapters are starting to really be repetitive in some sense with the same kind of thing happening over and over to earn a new skill or class or scenario. basically a lot has happened but no real progression.  alot of stats talked about but its unclear what it actually means or why we should care.

Reviewed at: 30. The Trail of Worlds

really enjoyed this but got a little lost as the series went on. Too much information added on without enough time to adjust to it. Some really cool concepts and the characters(or really our dear grandma) are well defined. I like a lot of the ideas and some of the foreshadowing makes me really curious to where this is going. But! She sounds busier than I am and I'm in university! What the heck man! You should cut down on the sheer amount of things she is doing. It would also help to have some of the acronyms in brackets (aka ac(alternating current)) for the more out there acronyms.

i like the grandmas knowledge, take on life and general humour but felt it was going way to fast for me to keep up. There is also very little conflict so far, however that's ok if the story is interesting without it.

I really like crafting in games I play and theres not very many litrpgs I've read that focus enough on crafting for my tastes. Great story about an elderly woman who's schooling the kids about how to really be an elite gamer which I love. Plot is in it's early stages but I've enjoyed what's happened so far and hope it continues to expand.