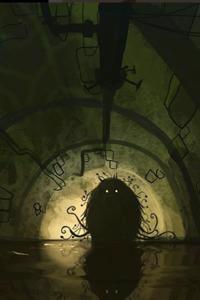 Down the sewer (complete)

Something happened. Like a burst of wind blows away dried leaves, a wave of pleasure rippled from the center of her chest and expanded to the rest of her body. The ripple, unlike a normal wave, didn’t lose its energy, rather the pleasure multiplied when it banged upon her most venerable flesh nodes. She fell down. Her whole body quaked. Saliva flowed out of her mouth without stopping. She felt warmth. A burning heat she felt under her navel, and inside her heart. She felt suffocated. The nauseating wave of pleasure made her thoughts hazy. It wasn’t warmth. No… it was desire. She badly desired to do something bad, something frivolous. Something which would stop her pounding heart and make her body bend at unnatural angles.

The milk churned inside her. It moved as if fondling her body from the inside. She felt butterflies warping inside her stomach- tickling her senses askew. Her muscle relaxed uncontested. She fell on the wooden floor which creaked. More like sighed, as if it had been abused in the same way one too many times.

She undressed. She tore throw her t-shirt and pushed away from her jeans.

Taking big gulps, she licked her lips. A white light flashed in front of her eyes. Her hands moved on her body, unconscious to her control. They fondled her breasts. Her nipples already hard and eager pulsated with want. Seconds passed like minutes. Her heart lurched. Her breath turned foggy and trailed in front of her. She felt warm- Scintillating. Her sweat coated hair grabbed her folds. Their touch lashed at her skin, leaving burned red marks. They give her the illusion of being caressed; of hands teasing her with touch.

Her spine curved lusciously. A loud beat pounded her ears. Her hips moved without stimulation. Her holes gaped for a taste. She didn’t have to see to know she was wet. She was dripping. She was slowly tinkling on the wooden floor. The scent, umm, so refreshing, so desiring…

Her hands moved down from her breasts. They reached her navel and this sudden stimulation brought some of her conscious back. Panicked, she slammed her head on the wooden floor, leading to a red bump on her forehead.

Come to me… let me fuck you… you know you want it… I can fulfill your wish.

The whispers made her want. To give in to her needs.

I’ll do it slowly. I’ll fill your body. I’ll rub you where you are the softest. I’ll massage where it will sting the most.

Ria almost saw herself, lying on a bed, her old boyfriend Jason behind her. His large hands moved up and down her skin. His breath Ria felt on her neck, raising Goosebumps. The air bit her like he once had, pricking and tingling her sense. Her back touched his chest, something hard pressed in the gap between her thighs. His tongue on her mouth moved in and out, deep into her throat, giving her only a sliver of air to breathe, almost choking her.

She experienced a lapse. Her mind wandered. Her body moved on its own. She moaned loudly, crushingly loud. She came. The scent of pure selfish bodily desire wafted strongly from her and into the windowless closed room. It picked her up from the floor and moved her toward the goblin. She looked at him, watching her moaning and fondling her body, massaging and pleasuring herself. She saw him beating his monstrous member, moving his thin bony hands on its veined skin. A clear liquid flowed out of the mushroom top, flowing freely without consent. Its scent felt so familiar to her. Like it was her own, something, stolen from her at some distant past, something so important that she would suffer life long if she didn’t make it her own.

So thick! She thought. A gulp she took. Her knees turned weak again.

She wanted him. She needed him. Her body burned so badly. Her heart pounded so harshly. She wanted to be fucked. To be pounced by a wild beast and gaped until she loses conscious. She-

Something jolted her out of the illusion. The figures moving on the bed disappeared. The light haze surrounding her mind cleared. A memory surfaced. A deep dark secret she had forgotten or buried came alive.

She stopped crawling and watched.

A small girl lay on sheets of pure white silk. Her arms and legs both tied to the bedposts. A boy stood tall over her- looming. Both of them were naked. The girl looked shocked senseless. The boy leaned forward and kissed her, but the girl remained motionless. Like a doll. A lifeless corpse she remained. Her eyes were wide open. She was fearless.

“NO!” Ria screamed. Her scream got their attention. Both of them turned to watch her. The boy grinned. The girl questioned her fate. Why didn’t you do anything? Her blank stare seemed to be asking.

Screaming, Ria ran toward them. She took big strides and jumped on the boy. Her hands passed through him. They passed through the young girl. Ria tried to latch onto something. A lock of hair, the bed sheet, the wooden support, the posts, the white marble tiles beneath, but she continued falling. She slipped through everything material and fell back into the fire lit room with the goblin furiously beating his member. His eyes on her, wide open with desire. Her eyes on him, wide open in shock.

The fire of lust burning inside her calmed for the moment. Her shaking heart followed its pace. A stark coldness enveloped her body. Deep festering hate emerged from her mind. It churned inside her. So deep a hate, the milk she had drank lost its potency. Drained of its effect, it returned Ria’s senses to her.

Gritting her teeth she stood. She looks at the goblin with murderous hate, who kept still beating his member, and as she walked toward him with the desire to strangle him, he grabbed the empty glass from the table and poured his seed inside it.

His spasmed while ejaculating, keeping his eyes on her, and filled the glass full with his thick white sperm. She dressed in a hurry. Wore the tattered remains of her t-shirt and pushed her legs through her jeans.

“Ah- finally.” He groaned taking a big gulp of air and let go his member, which continued pulsating with desire without a inch of decrease in its vitality.

His actions froze her. She looked at her hand in plain loathing. Her eyes moved between the glass and her hands, and she vomited.

“You can leave. You managed to preserve. It has been an hour.” The goblin told her, walking away from the recliner and toward the fire, where he stood facing away from her like an old wizened sage.

She watched him move away with hateful eye and point to her left, where a new door had somehow appeared unknowingly to her.

“Where,” she asked, gritting her teeth, clenching her fist and compressing her hate. “-does it lead?”

“The only way out is down, little lamb.” The goblin mused, watching the fire as if it held some deep secret.

Steaming, she looked between the goblin and the door. To go down or wait in the room with the naked goblin so close to her, she didn’t know the right answer. She couldn’t wait with him in the room either. How would she even sleep with the thought of going to sleep only to wake up naked and bound? Taking such things into consideration, she first rested for an hour. The goblin didn’t pester her. When Ria finally stood up to walk through the door, he came to sit back on his recliner with the television still playing the same video of horror in a loop. Heart calm and mind focused, she sighed and walked through the door toward whatever waited for her outside.

Bio: Life is hard, writing every day is harder, but the hardest is yet not living or writing, but fulfilling your dreams. I am slowly approaching my dream, I hope you are also.