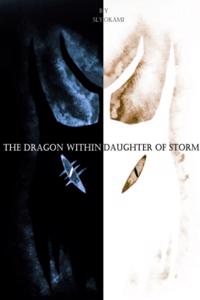 {The Dragon Within}; Daughter of Storm

Brought to you by the Author of;

And a continuation of;

I present you Erika, daughter of the golden storm Dragon Erikathyr and chosen Legend Theaviss.

On her 16th birthday, she was caught in the mischevious plots of creatures beyond.

Erika now finds herself lost in an unknown and relentless world.

Striving to survive, follow Erika through her adventure back home, and all that she faces in between.

It was a stormy day that afternoon, wind roaring over the great capital’s rooftops as rain barraged the streets just as well.

Not a soul was visible, not a light shimmering in any of the windows.

The style is overall clean and easy to read, with short, snappy paragraphs. It complements the story well, which is largely focused on fight scenes. However, the style is pulled down slightly by clunky and overly purple prose.

Regardless, it flows pretty smoothly, which is a big plus.

The grammar is mostly competent, with a moderate amount of mistakes here and there. It could be improved with some editing, but it's certainly readable as is.

The setting is classical fantasy affair, but the worldbuilding is very deep. This is largely due to, I believe, the previous installments in the story, which have allowed the author to introduce added depth to the setting over time. I would say that is probably also the most interesting aspect of the story. Everything has an epic scale to it.

The characters display individuality. While a little two-dimensional at this point in the story, you can easily read their individual personalities. The main character also displays a good amount of character growth, and has a clearly defined goal, which definitely helps lift up the story and pull along the narrative.

Pick this up if you enjoy deep lore with lots of named characters, large-scale fight scenes, and/or fantastical creatures and magic. The author also seems to upload frequently, with two previous installments in the series already completed, which is always a plus.

Best book ever! Draws you in and never lets go!

edit: chapter 44: omg i love you thank you! this chapter is soo interesting! cant wait till the next chap! I love my babies soo freaking much!

Edit:chapter 43: still freaking awesome! it just keeps getting better as the story goes on! Though I miss her brothers though! where the heck are they!!!!!!!!!!!!!!!!!! i need my michevious twins to get some action man! SlyOkami-san please! i haven't seen my babies since chapter 34! that's 12 chapters! ;-;  also I'm loving the diversity in the characters and Erika's character development! The way u paint her struggles and fights just draws me in and I feel like I'm right there watching whats happening first hand! though it be nice if there was a reminder on her companians roles... on that note................ i still haven't forgiving you for what happened in chapter 31- i know it was necessary for character development but I'm still sad! anyway erika is so awesome can't wait for more chapters

(original review~~~~~~Sorry for not being too good at review, especially advanced ones, but here i go.....

Each of the characters are new and fresh. the grammar is good and the story flows without any breaks. everything is detailed, but not too much. so far the character development is absoulutley amazing! after being a reader for a long time you tend to see that the sequel is just the first book rewritten, but with this book you did the exact opposite! the story is fresh, and although previous characters from the first book are in there, you didn't make this a rerun of what happened! you gave us readers something unexpected and i thank you from the bottom of my heart! thank you so much for all your hard work and i just want you to know that you are appreciated and this has to be one of my most favorite webnovels of all time!

(p.s.- i love your story!! thank you so much for writting a seqel to The Dragon Within!!!! You write so well and your stories are easy to read!!! thank you for your hard work!)