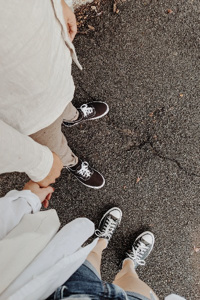 The trio of young women entered the theater on the top floor of Tillman’s, a small one-screen venue, but relatively uncrowded this weekend. It had been a few weeks since the last data transmission from Earth came in, so they still had the same movie that had been playing here all month-- Dinosaurs from the Age of Steel IV: Retribution. None of them had seen it yet, though, so it was the perfect chance to get it before more movies arrived.

Amira examined the poster closely and wondered what life on Earth was like. Did they really have dinosaurs nowadays, or was that just a fictional element? In all their education, they didn’t really go into enough detail there. Adults who had boarded this ship three decades ago mostly came from the colony Tiernan, so even they didn’t know much. What was Horus One like compared to their own home? Seeing as how long it took for data to reach the Horus One, they were probably already on Dinosaurs from the Age of Steel V by now back on Earth...

Nono examined the poster closely and appreciated the hand-painted artwork depicting the giant creatures stomping around an urban wasteland, humans with laser weapons desperately trying to fend off attack from Pterosaurs with throwing spears in their talons. Despite the cheesiness, it was clear that a lot of work was put into making this story look like a thrilling, edge-of-your-seat romp. She wanted more than anything to be a part of a production like this, if she could ever manage it.

Claudia examined the poster closely and realized the most important conundrum, the most vital quandary that they had yet to discuss whatsoever.

“Guys,” Claudia said. “I just figured out something really serious. Who’s going to sit in the middle?”

“I never thought about this,” Nono said. “This must be why they always say, ‘Three’s a--’”

“Shut up,” Amira and Claudia interrupted.

“How come?” Claudia asked, pretty inclined to agree with her here.

“Because whoever’s in the middle gets to hold two hands, and I really like holding you guys’s hands... and stuff...” Nono could hardly get through saying this without bursting into a goop of saccharine jelly. Her face was all red, and she covered it up with her hands.

Claudia and Amira were lost in a stunned silence.

“Yeah, I don’t see anything wrong with that,” Amira said. “Go ahead.”

Claudia gave a confused look to the girl. “Really? You’re fine with it?”

“Huh.” Claudia put her hand over her chin, pretending to be deep in thought. “I was sure you’d be the one to say something like, ‘We have to be fair, because fairness is the key to a healthy relationship. We will choose randomly from the pair of dice I keep in my purse.’”

“The thought crossed my mind,” Amira said, ignoring her girlfriend’s jabs but still crossing her arms. “But I think it’s fine, if Nono wants it.”

Her cool facade started cracking almost instantly. “Also because... Nono was.. really cute about it...”

Nono got all embarrassed again, and now Amira was flustered as well, leaving Claudia to laugh it up at her girlfriends. “I’m with a couple of Bashful Berthas,” she said.

They went into the theater and found some nice seats near the top row. The movie was set to start playing in about five minutes, and plenty of colorful advertisements were playing in the meantime, mostly showing off extravagant products no student could ever afford on their monthly credit allotment. What use could a teenager ever have for a portable telephone, anyway?

As they had arranged, Nono sat down in the center seat, and Claudia and Amira sat on either side of her. She put her arms on the armrests and let the girls take them, which they did gladly.

They giggled among themselves.

“One week down,” Amira said.

“To a week together,” Claudia said.

“And many more weeks to come!” Nono added.

“Oh, you stop it. Of course it’ll be many more weeks,” Claudia chided.

A week in, this relationship experiment seemed to be paying off. But it was far from over. This story of three girls in love was just beginning.

Thanks for reading! Please leave a comment about how you felt about this story (I need notes for when/if I ever make a novel outta this) and please leave a rating!

Support "On the Ship (girlxgirlxgirl)"