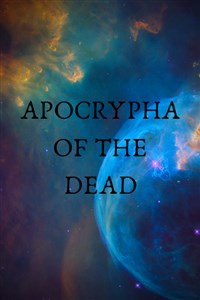 Apocrypha of The Dead

It was another monotonous cycle at the Bureau, but that simply made the ancient god's work easier to hide. A table sat in front of the cosmic being completely cluttered with stacks of paper inside the tiny featureless room. The god appeared to be a middle-aged man dressed in business casual attire. Strangely this seemed to be the man's only features. He was hazy and indistinct as if all he was made up of was simply 'middle-aged man dressed in business casual attire'. His fellow Law makers, as indistinct as he was, sat in adjacent featureless rooms with far more tidy desks. He hated them.

The god stopped to rub his face, leaving the Contract in front of him half finished. He had been making such Contracts for the warring deities for a couple of thousand years now and had grown to hate it. Oh sure, weaving the Fates of Gods and mortals was an interesting problem at first. A problem he found to be very good at solving, but now it was all he did! The Contracts were supposed to solve everything, and yet the stalemate holds as strong as ever, he thought to himself. The Contract in front of him was nothing special, he made countless similar ones in the past. The mortal gets a wish of their choosing and in turn, became a champion for one of the endless gods to represent them in the greatest conflict of existence. After all, if two all-powerful beings faced each other it would just be a standstill, and where was the fun in that? Where was the victor? Absolutely nowhere. Best to decide who wins by letting the mortals spill blood instead. Just inject a little bit of free will and voila! Enough actual randomness that theoretically somebody could finally come out in top in the whole blasted affair. But granting a mortal a fraction of a god's free will by tying it to the Fate of an otherwise omnipotent deity was a dangerous thing. The Contract imposed many limitations on mortal and god alike to prevent utter disaster. Unfortunately, such limitations have been...heavy-handed in this particular god's opinion.

Thousands of years and the stalemate persisted anyways.

But soon that will change.

The Nameless diety threw himself back into work with a restored fervor. He changed his mind and decided this particular Contract was going to be one of his special ones. Every Contract had to be written up in advanced. Weaved with mighty Law magic that many of his fellow gods even had difficulty deciphering their true scope. Weaving the Fates of a divine being and mortal was no simple affair and each one had to be custom made for the pairing in question. The abstruse nature of the work though allowed him some element of ambiguity and he exploited this fact to it's utmost. The other sticks in the mud working on similar Contracts would be horrified to learn about some of the adjustments he had been making lately. A few tweaks here, some swapped words there, this contingency removed, that safeguard conveniently forgotten...

Oh, he would definitely face punishment if, no, when the other gods found out what he was doing with the Contracts he was charged with creating. It will be too late by then. Once bound by the Contract nobody can alter the terms haha!

He moved the finished Contract over to the only remotely organized pile on the table. Contracts completed and due for proposal to the mortals in question. Not that there was really any choice in the matter, they had already agreed before the offer was even made. No point in offering a deal to pathetic worm bound by a static Fate if you already knew they would decline. Better to check that they will say yes first then make the Contract and only after make the actual offer.

He only had to be patient and wait for his altered Contracts to be put into effect. Then maybe there was a real chance for the stalemate to be broken. Sure some will fall, maybe even himself, but that was the goal wasn't it? To finally change the status quo? The god chuckled to himself. He has waited this long so far, he could find in himself the patience to wait just a little bit longer.

The god wiped the smirk off his face and began to work on the next Contract when there was a knock on the wall. Now that was a bit unexpected. Nobody was due for pickup for a least a couple more cycles. He frowned.

A faint rectangular box shimmered into existence in front of him. It was a door but could better be described as a gaping hole in the fabric of existence. A dark being stepped through the portal. Dressed in a monochrome suit, the visiting diety's eyes burned with a sickly yellow hue. Not a single trace of hair could be seen anywhere on his body and his lips were impossibly thin, more like a thin cut in the grey skin that wrapped tightly around his skull. A knowing smirk was permanently plastered on his face.

Thetos was early for his new Contract.

The Nameless god stated as such with a frown.

"Oh? And is that a problem my friend?" Asked Thetos, his voice raspy.

"No. Unlike these other pencil pushers, I know how to get my work done in a timely fashion. Your Contract was finished last cycle. You've never been one to rush things though Thetos, why now and why this Contract?"

"Ah yes my friend, you do manage to churn out these wonderful little things faster than anyone else. Hope you have not been taking any corners?"

He froze at those words, not paying attention that Thetos had dodged his own question with one of his own. He gave his fellow dirty a stern look, offering no reply. Have I been caught already? I figured I could get more of the special ones out by now.

Thetos seemed amused by the reaction, casually thumbing through the scattered paperwork on the desk but leaving the finished stack of Contracts alone.

"Relax my friend, I only joke. I merely admire your work ethic. Must be hard not being Named and unable to compete with the rest of us."

That verbal tick of his was starting to get irritating.

"The price I paid for being trusted with Law may not have been easy to pay, but I paid it gladly. And would do so again if given the choice. Anything to end this blasted war once and for all."

"Oh, I have no doubt that you would do anything, my friend. No doubt at all" The smirk never left his face.

A silence stretched between the two. The air grew heavy enough to crush mountains and split seas settled around the two men and yet neither had any sign of straining under the pressure. The table creaked but held. A testament to the ancient processes that built the divine piece of furniture.

Suddenly Thetos clapped his hands and the pressure evaporated into nothingness.

"Well then my friend, where is my Contract? I'm excited about this particular one!" There was an unusual glee to Theros's voice despite the previous tension between the two as if nothing had happened at all.

The Law diety snapped his eyes to the stack of finished Contracts as if broken out a stupor. He quickly rummaged through a couple of the tops before handing Thetos the correct Contract.

"Right here Thetos. All in order."

"Very good my friend, very good indeed!" The god took the Contract eagerly. Glancing it over quickly before it vanished completely, stored away inside a personal pocket dimension.

Thetos turned back to leave via the same tear in the fabric of reality. He stopped for a brief moment as if prepared to say something. However, he did not even turn around and proceeded through his portal, the rectangle closing up seamlessly as if it never existed.

The god slumped in his chair, the tension draining away from him.

Maybe giving Thetos be one of the special Contracts was a mistake....