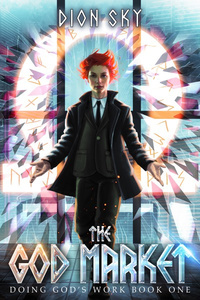 DGW is on Discord! - https://discord.gg/fuRPFeV8Hf

I don't know what the story is trying to be, and I don't care.

It's too good for me to argue.

Okay, I'm not going to do a specific breakdown of the aspects of the story. They're all in the mid to upper tier of professional writing, with no noteworthy flaws and all the platitudes of being clean, easy to follow, and engaging. If you have a problem with this writing, you're a pickier duck than I. And I am one picky duck.

And the characters, oh the characters. Amusing, affable, even the ones that you're supposed to hate are *fun* to hate, rather than just annoying. Except "Shitface"- he's not annoying or fun, he's goddamn terrifying. Especially since even he is just a cog in a massive machine. I find myself wondering how it's possible for anyone to face what the protagonists are trying to beat.

So, being who I am, I'll focus on the one thing that I find even the least bit off-putting about this story. I don't know what it is, and I'm not sure it knows what it is.

Sometimes, it reads like an intense intreague-thriller, with literal world-shattering stakes waiting in the wings.

Sometimes it reads like a fun and relaxed slice-of-life sitcom. The banter between characters is amongst the strongest I've ever seen, so much so that I read through massive amounts of unimportant dialogue with a smile on my face and feeling completely satisfied that my time was well spent even though a hundred lines of reading had perhaps five lines of plot advancement. AKA: Slice of Life at its best.

Sometimes it feels like an outright satire with stuff that on the face of it feels silly and illogical to the extreme. Loki and the devil sitting in office cubical complaining about their boss being an asshole sounds like the pilot episode for something on Adult Swim. And it's hilarious.

This story tries to be a thriller, a mystery, a comedy, and slice of life. It's like someone blended American Gods and Purgatony. And somehow, this seemingly incompatible blend of ideas comes together in a way that highlights rather than distracts.

In case you couldn't tell, I highly recommend it, even if it's not your style- treat yourself to the novelty. Unless you're the sort who really hates genre-blurring, in which case you probably won't be a fan.

Office Politics on a Mythic Scale

Reviewed at: 63. All the King's Iterative Workflows Couldn't Put it Back Together

The plot initially starts off like a whimsical comic fantasy from Jasper Fforde or Terry Pratchett. Loki and Lucifer exchange snarky quips while stuck doing drudgework in a soul-crushing office environment completely staffed by miserable and dysfunctional gods from all pantheons and cultures.

But the story only builds from there. You start getting hints of the wars and crimes that took place before the corporate takeover. A revolution starts to brew against the Tyrant. Things get dark as you find out exactly what happens to gods who get "Demoted" too far down the hierarchy.

This story's greatest strength is it's fantastic ensemble cast. The author has innovative new takes on well known characters from classic mythologies alongside fascinating depictions of under-represented gods from diverse cultures. These characters aren't noble heroes, they're the outcasts, tricksters and villains from a variety of pantheons. They're flawed and morally grey, but each of them is so distinctly charming and lovable, even when they're being ruthless or capricious.

If you enjoy surrealism, dry humour, well written dialogue with snappy banter over a slowly burning epic of underground rebellion, this story is for you.

Disclaimer: I feel obligated to say that I know the author in real life and I'm a beta reader for her story. However, this review is entirely honest and I cannot recommend "Doing God's Work" enough.

Reviewed at: 10. Smiting is Worse With Computers

First of all- this is niche but amazing.

Don't expect action. The focus is more on humor and exasperation with the banality of even celestial office life while pursuing a mystery/conspiracy.

The characters are well written and more than anything, the mystery is engaging.  Seriously, I hate mysteries and I'm excited to track this down.

If you're interested in a character/story driven drama/slice of life read this right now.  It's absolutely top notch.

Up in my feelings about this one. Didn't think I'd feel bad for any gods considering how old the mythos is, but you really made characters out of them - especially Loki's relationship with their kids. I don't want to write spoilers here, but I also feel real upset about what happened to Appollo, and I wasn't expecting to feel bad considering he's kind of an ass. Good on you.

Gods have feelings too!

Reviewed at: 92. Weapons of Mass Disruption

This book is a masterpiece that deserves more eyes pointed towards it! Grabs all of his extra eyes and points all of them at Csuite. There. Now that that's done let us observe what interests lie within it!

Superb! Csuite takes a while to write each chapter but when she does the flow of the character conversations and events is simply sublime, top tier and is very enjoyable to sink myself in. First person narrative from the point of view of god named Loki who is forced to work in a divine office.

A very original idea in my opinion, Lucifer and Loki and other gods working in an office - totally caught my attention and kept it attached to this book for ages. Whole 92 chapters of fun. [ Great now I gotta update this number whenever Csuite releases a new chapter]

The gods feel believable even though they are gods and I found myself rooting for Loki's struggle against the system.

What was that last thing? Ah ye, overall:

Superb book, read it or I will come over there and beat you with my [ looks around] uhhhh christmas tree that I haven't taken down because my cat lives in it now. There. Divine-Tree violence encouragement!

[ Review Baron disappears into the sky atop his umbrella. ]

This novel is on the level or even higher as the novels in the top 10 or even top 5. With the characters fluidly interacting with each other and a smoothly pieced out story of each side characters background, this story just tops it all out.

There are a few cliches in it, however, in the fact that it does so in a highly different take, which makes the reader question, “What’s going to happen next”?

Reviewed at: 35. Up for Interpretation

The characters and writing grabbed me from the start, but the developing plot has kept me hooked, I can't wait for more!

Doing Gods Work has a novel premise.  The bureaucratization of religious cultures and its effects become interesting to read about as we read about the main character(Loki) and his push against the oppressive regime.
The characters are well made and relatable, despite being gods.
I'm not a grammar Nazi, but I don't see any obvious mistakes.

Lost My Night To This - Think I'm Addicted

Reviewed at: 25. Zero Days Since the Last Safety Incident

You wouldn't expect it out of an almost slice-of-life corporate satire, but this story just drags you in and doesn't let go for anything. Especially after chapter 11, things start to pick up and everything just builds in a big interconnected web of plot advancement. Really, I just love this story - it might be my new favorite on the site, which is why I'm dedicating my first ever review to it.

Style: You don't get writing this good very often on RR. I can only remember two or three stories that even come close, and I still think this one tops them. Everything flows like silk and the MC's "voice" is really distinct. (In the best way)

Story: Once you're past the initial "foundation building" chapters, putting down this story is a monumental task. You wouldn't expect a story like this to have a breakneck pace, but Doing God's Work progresses faster than a lot of the "progression fantasies" on this site. The plot also feels like it's been intricately planned from the beginning. We're already starting to see the weaving of plot threads together, and something tells me that the author is foreshadowing so many things that we haven't noticed yet.

Grammar: It's perfect. Nothing else to say here.

Characters: All the characters feel "real" and like they have lives outside of the story. Everyone has their own quirks and motivations, and you either love to love them, love to hate them, or hate to love them. They're also really funny when the tension is lower.

Character driven story. Each character is unique, speaks with their own voice, funny, witty, mysterious, you are kept in the dark for the majority of the story, but there is an incredible sense of discovery as you read further, revealed through characters and the cultures they come from.

There are twists, turns, you are kept on the edge of your seat. Motivations are not always clear, in a good way.

I highly recommend this story.