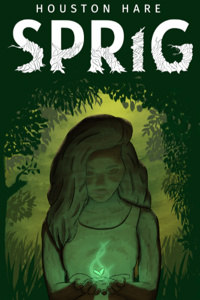 A seed of hope in a world of hate

War rages as land runs out. Elves, Dwarves, Humans, and other races fight for control of the limited space they have. When a land mass suddenly appears out of nowhere, people flock to it, only to be caught up in its mysteries.

Kaia, one of the last living members of the Treek race, heads to the new land to find others like herself and escape the war that surrounds her. With conflict at her back, and untamed wilderness ahead, she and the companions she makes discover the truths of the new land and themselves.

A new chapter of Sprig is released every Friday. For the most recent chapters, please visit my writing website: Sprig.HoustonHare.com.

To buy Paperback or eBook copies of Sprig, check out my shop: HoustonHare.com/shop

Sprig, so far, is the type of book I would expect to see on the bookshelves at a book store in the YA section, and critically acclaimed. But be one of those rare (at least these days) YA that's actually good.

We've got a fantastical setting, where all the classic races (Elves, gnomes, beastkin, etc.) hate each other's guts and war and kill each other more often than not.

But something weird happened: a new landmass appeared, the people who went to investigate all disappeared, and now we have an uneasy truce between the races as they try to find their lost brethren.

So, style wise, I personally enjoy Hueyhare's prose. It's descriptive, but not overly so.

The premise, as explained above, is solid. And Hueyhare take us right into the action of the story. He also slips in worldbuilding in a subtle way that doesn't big down the story.

The pacing is fantastic. This is the type of story that would be held back back a slow, leisurely pace, so the quickness is justified. We've got quick introduction of our MC, her making tentative allies, and the beginning exploration of the mystery at the heart of the story.

No problems with the grammar noted so far. Maybe like one typo? Though please note I read most of this at a ridiculously late hour, in one sitting.

And, of course the characters.  Oh, yes.

Kaia is solid, and not an illogically driven, emotional damsel. She, so far, is mostly making smart decisions. And that is (sadly) refreshing. To not have an idiotic young, female MC entangled in angst and dull romance. Yaaay!

Her partners are a fun crew. Eldery, tricksy gnome. A young outcast, like herself (he's a bit typical). A bitter, angry shapeshifter. The details slowly revealed about them flesh them out piece by piece. I'm excited to see the races go from enemies to staunch allies. (Though this will probably an overarching plot line)

All in all, Sprig has a lot going for it. I wouldn't be surprised at all if this became a traditionaally published book- because it's really there.

Thank you author for this amazing read. Good luck!

A fun blend but maybe not for everyone

Short: This is a dark and unfriendly world, but there are also moments of goodness that mostly mesh really well, but occasionally is a little jarring. However still worth a read!


Long(er): Aside from the themeatics, as a work of fiction this is defintely pretty high quality and serves the reader well as its presented in a pretty understandable way. Furthermore the world building and lore provide an intersting mystery as well. Not only that, but the MC and her band act as an somewhat unique group of outcasts that are pretty nuanced and are solid protagonists overall.

I am so hooked on this story already. I can't wait to continue reading and seeing more character development. Kaia is such a bad ass. I'm loving that she's the main character. I'm excited to see what happens in the next arc. 👍

A war was fought, everyone lost, now the different factions must work together to find missing colonists. Works out about as well as can be expected.
Our MC is the sole survivor of her family and is forced to work with the people who fielded the armies that killed her parents (or something like that - don't want to risk spoilers).
Work with people who despise her in turn, because her people killed theirs as well.

All that angst makes for a throughout bleak tale. If you like a dank (not a typo, it's not exactly dark but it's something close) and angsty atmosphere, this is the story for you.
Unfortunately, that's not my cup of tea at all.

Grammar is very good. Characters are well defined. Story is still in development but looks interesting so far. Despite that I'm giving up on it, the entire atmosphere is way too grey and downbeat for me.

I'm giving it a neutral 3 stars because it's technical well done, just not for me.

Honestly just look at the banner and cover image.

This is gold. The author obviously knows how to entice readers. And once you start the actual story you'll be hooked just as I was!

I’m really enjoying this storyline and wondering how they’re going to find their relatives that have disappeared.  Love the detailed descriptions of the different races in the story and the adventures they’re on.  Chipry is definitely my favorite character so far!!  I would recommend to anyone looking for a story involving fantasy and magic!  Well done!

Creative and engaging - it’s keeping me on the edge of my seat and is unlike anything I’ve read before!

I'm not caught up with this yet.  I've read the first 7 chapters, but I will say I am enjoying this story.  I find it unique and captivating.  I think about it days after I read it and if I see the title or the author's name I know immediately which story it is.

Awesome First Chapter!  I am definitely getting pulled into this one.  Looking forward to the adventures!

Really enjoying the story so far!  The author is making a compliling world and I am interested in knowing more about how the magic works.  A lot of mystery in the characters backstory which is keeping me coming back for more.  Excited to see what is next!