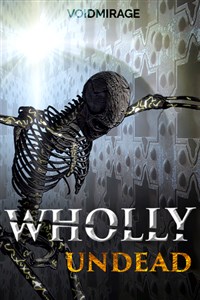 Join Jack, after his death by microwaved food, as he reincarnates into the body of a ruler of an undead kingdom in a strange environment of the underworld. Follow our, wannabe nihilist and socially awkward, hero as he learns about his world, and tries to play the part of their supreme pontiff and ruler of the Holy Kingdom of Deagoth.

Give it a try, and leave a review.

And here is a map to help understand locations, as they are mentioned in the story.

Puns. OP MC. Not-too-stupid MC. Might have more to offer than just funnies.

So I'm writing this review at chapter 50 (74) because this is where the story changed from "funny low-quality trash" to "huh, this might be a good movie?" to "Oh, this... is really funny and might have plot?"

The first 3-5 chapters are terrible in many ways. It gets better quickly. Protag is OP from the start, all his conjectures are right, and awakens as king of the most powerful kingdom in the underworld. Some neat court antics, then the puns start in ernest, and it is glorious.

Many of the puns are tongue-in-cheek, hidden in names, settings, and in character accents. They might not be accents, but I find it helpful and amusing to imagine a lot of the characters with various Southern US accents. Other puns and jokes take the form of absurd situations, snappy one-liners, and witty rejoinders. Pop/Counter/Otaku culture references abound. Also, the chapter titles usually bring a smile to my face.

The story has barely begun. It is too soon to say if it'll end up good but it has the makings of something decent, at least. The villians aren't smart but they aren't stupid and there seems to be a huge epic/odessy style that'll be happening. It looks like it'll be good but I'm here for the puns.
There is a harem, it starts early and is pushed for hard. Unlike most harem protags, he is actually pretty damn romantic with his main wife, doesn't expect women to be comfortable with crap treatment, nor for women to just fall at his feet. They do that anyway. Only one of the potential harem members (so far) is weird/forced, and she might not join, because it'd be weird. Hot but... weird.

There are a lot of typos. Fortunately, the typos are generally homophones in various dialects of English, so they're like bonus puns. Half the time, you can't tell if the writer made a mistake or they are a genius. The other half of the time, you want to strangle them for not using  any grammar checker. Fortunately, the typos don't detract from the story enough for me to stop reading. As I said, helpful to imagine a southern drawl and all the typos are just part of their accent or bonus puns that the author didn't want to let go.
Ok, the typos get pretty damn bad, made worse by the fact you don't know if it is an intentional one or not. The story is too good for me to drop, though.

Some reviews mention it is like Overlord and there are some parallels, I agree. The biggest difference is that while Ainz-sama had a bunch of murderous misfit monsters, Jack is an actual king with normal undead subjects, and only undead subjects, in a fairly enlightened kingdom compared to the Tomb of Nazarick. Second, more subtle difference is the MC is far less dense than Ainz.

Yeah... So you should read this if you like puns, OP MCs, and have a reasonable typo tolerance...or a lava lamp/immiscible liquid fetish. You'll find out why I say that before chapter 50. Enjoy it!

Overall this has been a fine story, though i coulnt help but to compare it to Overlord, with this story using many elements from there. This story is also somewhat cliched in the same ways as Overlord, but i dont necessarily consider that a bad thing.

This story starts in the Holy Undead Kingdom of Deagoth, where the Holy Witch King has been entombed for a thousand years. Then he reawakens, but not all is as it seems to be, for the Holy Witch King is not the person he was once, a reincarnee from Earth took his place and is put in his spot, without knowing anything.

The MC bluffs his way through the problems of his kingdom, and like Overlord, it somehow succeeds. One thing i do like about him, is that he does take action himself, even if he is a sort of coward on the inside, also expect him to do some references to other media in this story.

The other characters are fine, but i feel like they could be developed even more, to feel more real.

Sadly enough, grammar is a major problem in this story, with there being wrongly used tenses, many typo's and simple grammatical mistakes. I have to recommend the author to edit the story, or get someone to help him, it would improve the readablity of this story so much.

Currently a fast release speed, so no problems on that front.

This story is a fun, enjoyable read, even with its flaws. Recommend for anyone who likes a ton of misunderstandings, or just wants to read a story like Overlord.

Good, but could be better.

This is a fairly entertaining story, though if you don't like overpowered MC's you definitely don't want to read this, because the main character has things come rather easily to him and people are constantly misunderstanding things in his favor. Still, while I typically get annoyed by that, this story does it in a humorous enough fashion that I'm more amused than annoyed. The characters all feel fairly distinct and unique, and the entire undead society is rather fascinating to read about, the author has definitely put a bit of thought into how his world works. My main gripe with the story is that the editing is brutally poor. Constantly uses the wrong words in a sentence, like comfirmable instead of comfortable, just, all the time. Even aside from using the wrong word, the phrasing is often really awkward and hard to parse at times. It's unfortunate, I really enjoy the characters and story, but it's dragged down by the presentation.

Reviewed at: Chapter 192: Enter the Soulscape

Good story, a lot of grammar error (I don't speak English, but I was able to see them). All in all it's good but I'm am not a fan of harem and I hat Japanese's novel because of them. I repeat the story is interesting but when the romance feel just like a Japanese novel. I know it is not for me

Edit: Now, later in the story, some developments have made this both more and less interesting. Although a humorous point worthy of note is the zombie apocalypse seemingly burgeoning in a world already ruled by the undead.

As of chapter 28, I can sincerely say that not only is this novel well written, there is also barely ANY grammatical and for one such as myself nothing is more off putting than an error pervaded story.

The MC is quite likeable?

One thing of note (to the credit of the author) is that most of the characters so far are well fleshed out (with political undercurrents, individual motives and all that, I do wonder though, How do skeletons bone? Do they even bone?) and several incidents hints to a quite exciting world.

Should the novel deliver on the promise of these aforementioned hints this book will definitely gain the recognition it will deserve.

AND of course the update speed is not too bad Ai?

Kudos to the author and I am definitely looking forward to more.

Has been done before. Will be done again. Nothing too dastric to say about it other than that. Has harem later on. Skeleton harem, to be more exact. I was kinda weirded out by that in the start, but also feel that it was handled well enough.

What wasn't handled well was everything after that. He got a bit more powerful and then... not really much else. I just didn't feel like too much happened, to be honest. Sure, there was that whole computer deal, that made him all the more powerful and stuff, and there was also that other guy who also got more powerful, yet I didn't really feel that attached to it all at that point.

4/5. Was good but fell down due to a curse that too many stories face.

Read for character, not style

Reviewed at: Chapter 29: The Biggest Bluff

The style is what brings down the story. It's written in colloquial language when slightly more formal language should be used, even for someone just coming into a king's role.

Grammar has many minor errors.

Characters are what make this story interesting

Not Bad nor is it great

The Style is and is not something new. The plotline is shifting sometimes so that Relationships are a Bit queasy.

The Story is nice and readable, the line is somewhat clear and goes really good Down.

Grammatically it's hard to say that its bad as it's not truly miserable. Sure you will find spelling Errors, wrong word choices and typos but in all enjoyable.

//My tip for the author would be eventually reading it yourself Again before publishing because most word choices and typos you would see in Time. Also an proofreader is an viable choice.//

The personas are mostly fleshed out only i get the Feeling there is something that is missing on Part of MC and Sidechicks. Differating between  personas is not hard. Connections are clear and some loveable characters with Drama used right.

All in all an really enjoyable reading experience.

You know what i give an Overalls Score of 4/5