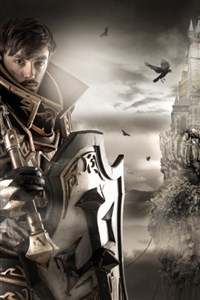 An invasion from another dimension is shut down by an Empire's traitor and the world has a scant few decades to build the strength to resist a multidimensional Empire.  How will the world fair when no one even knows its doom is one barred gate away?  Fortunately, the traitor has a plan.  Maybe with a bit of luck and planning, he can build a force to defend the world without anyone realizing it.

(From wikipedia) - LitRPG, short for Literary Role Playing Game, is a literary genre combining the conventions of MMORPGs with science-fiction fantasy novels.[1] LitRPG is a literary genre where games or game-like challenges form an essential part of the story. A LitRPG work simultaneously narrates the story of characters inside and outside of the game-world. At least some of the characters in a LitRPG novel therefore understand that they are playing a game: they are 'meta-aware'. So, while Tolkien's Lord of the Rings is a fantasy novel, a book about people creating avatars and interacting in a Lord of the Rings MMORPG would be a LitRPG novel.
Why do I read them? You know, I am not too sure. I love MMOs. I played them, quit them, joined up and repeated the cycle. They are fun! They are a massive waste of time but so are most games. Do I want to read about someone else playing them? Sort of?
The advent of VR and the possibility of VR someday becoming so immersive that you can't tell them from reality sets the imagination on fire. What if this could be life? But most stories fall short. At the end of the day the protagonist hangs up his VR helmet and goes to have dinner with his mom and dad or other family and it becomes meaningless. It's like the story that ends because the main character woke up and nothing you read matters.
There have been some books that explore the concept of the intersection of reality and total immersion VR. Enders Game is a classic. There were a few others that escape me but they exist, however, the cross between the game and reality is weak.
So what if the game was real? The technology needed for total immersion VR is so advanced that by the time we reach that goal technology should have naturally evolved to include several items.

So what would people do if it were real? Well, they would probably limit and regulate it since the drawbacks are very obvious. Even if you look at the basic aspects of this you can see some negative possibilities. Look at the Sword Art Online anime. Personally, I think they missed the boat by putting a bomb in the VR helmet. Do you really need a bomb when you have direct access to the brain?
So what kind of events would you need to have a situation where the obvious drawbacks haven't been explored? Maybe a society where the advancement of technology has so far outstripped the explorations of its applications that ignorance was truly bliss? Okay, so I had to put in an alien invasion to kickstart the premise, but that was just one of the possibilities.

A great litRPG, don't miss it.

Reviewed at: Prelude 6: As Projected

Evil Empire, Alien invasion, virtual reality!  All the essentials for a great science fiction story and more.  A well written and easy to read litRPG that is well worth reading.

Only 8 chapters so far, but I'm enjoying this story. There are hints of a deep backstory that will probably be filled out through the use of the flashbacks to the earlier time period (early 80's time period analog) and the future time period with immersive VR. The characters are a little lacking in depth right now but it is still early on in the story since around 1/3 of the chapters are flashbacks. I like the system setup although would appreciate summaries of changes in stats and the like. I do like how the characters are beta testing things and making changes based on their preferences. Overall, I like the direction the story is going. Just in the early stages of development but I can see it being another great series like the author's other works!